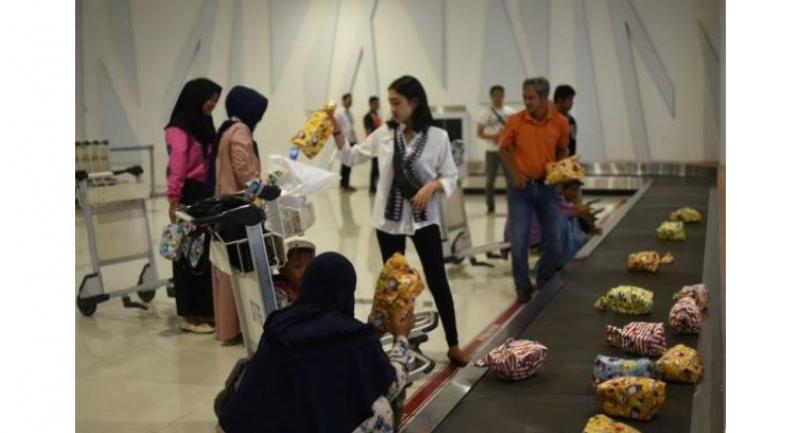 JAKARTA - Passengers of the first arrival of 2019 at Sepinggan Airport in Balikpapan, East Kalimantan, were delighted by a surprise when waiting for their luggage.

Passengers expressed enthusiasm when the baggage carousel delivered gifts ahead of their luggage, with individually wrapped packages for every passenger of the flight.

The estimated 150 passengers of Lion Air flight JT 858 on the Tarakan, North Kalimantan-Balikpapan route received a parcel of snacks, including cakes and drinks, as well as the typical East Kalimantan souvenir of beaded shawls.

"Not bad for breakfast," said one passenger. Their flight had departed at 5.50am and arrived in Balikpapan at 6.50am.

Passengers were also welcomed with a performance of traditional dances from the Kenyah tribe, a local Kalimantan tribe that is famous for its artistic creativity. The dance was accompanied by music from traditional sampe guitar, a four-stringed traditional Kenyah instrument.

"This is our appreciation for the people who have used the services of Sepinggan Airport," Farid said.

On the previous day, a similar event was held for passengers and crew of the last flight departing from Sepinggan Airport in 2018. Passengers and crew of Lion Air flight JT 663 on the Balikpapan-Palu, Central Sulawesi route, which took off at 8.55pm on Dec. 31, also received similar souvenirs.

"We make sure all passengers are well served," GM Farid said.

Sepinggan Airport, managed by state-owned airport operator PT Angkasa Pura I (AP I), in 2018 won the second best airport award with a capacity of 5 to 15 million passengers per year from the Airport Council International (ACI).

Meanwhile, the amount of cargo passing through Sepinggan Airport rose by over 80 percent to more than 98.8 million kilograms in 2018 from over 54.5 million kg the previous year.

"Our target remains the same, which is to be the best airport in Indonesia and also become a reference," Farid said.