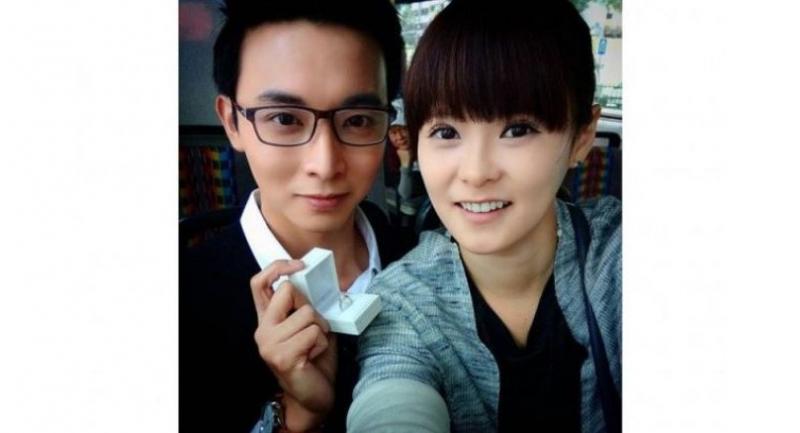 SINGAPORE - Actress Jayley Woo bade an emotional farewell to her boyfriend, actor Aloysius Pang, in a series of heart-rending Instagram posts overnight, shortly after the Ministry of Defence (Mindef) issued a statement on Wednesday night (Jan 23) confirming his death.

Corporal First Class (NS) Pang died at 8.45pm on Wednesday from injuries sustained on Saturday (Jan 19) while carrying out repair works inside a Singapore Self-Propelled Howitzer during a military exercise in New Zealand. His lungs, heart and kidney were damaged when a gun barrel was lowered. He underwent three surgeries and was put on artificial life support, Mindef said.

Read also : Singaporean actor was crushed when caught between howitzer's gun barrel and cabin
In an Instagram post close to midnight, 27-year-old Woo wrote in Chinese: "Aug 24 is your birthday, Jan 4 is a special day of ours, and on Jan 24 you left me without a word. All that is left is your cold and hard hands."

One of the photos in the post shows her holding Pang's hand in the hospital.

"Why is it such a coincidence that my favourite number is four? Why have you heartlessly left me behind? How could you bear to leave this world? Why do you treat me this way?" Woo said.

"I did not have the fortune of being your wife in this lifetime. We must definitely get married in the next. I love you, I really love you. Thank you for taking care of me all these years. I love you forever. Please leave in peace. Appear in my dreams often, understand? Also, I will never forgive you in this lifetime.

"You'll always be a part of me, my man. Till death do us apart, baby boy."

She added in a Chinese hashtag: "My world is gone."
Before this, Ms Woo and Mr Pang, 28, had not publicly acknowledged that they were dating, though they have been spotted together a couple of times.

The pair starred opposite each other in two Mediacorp Channel 8's drama series Tiger Mum and Super Senior in 2015. They also appeared in another drama in 2017, Dream Coder.

Woo was scouted by Mediacorp and groomed to be a star soon after she took part in the 2011 The New Paper New Face modelling competition.

She posted several Instagram stories early on Thursday morning revealing details about her relationship with Pang for the first time, saying that they had been waiting until they got married to go public with their romance.

One of the stories was a photo of the vast New Zealand landscape, which was the last photo Pang sent to her after he arrived in the country for an annual live-firing exercise called Thunder Warrior as part of his reservist duty.

Others marked the milestones in their relationship, including when Woo first appeared in a photo on Pang's Instagram account in March 2015, their first overseas trip together in January 2016, and when he surprised her with a trip to Lazarus Island on her birthday.

"When I saw him lying helpless on the hospital bed, I kept asking him: If we could turn back time, could I have taken your place?" she wrote in one of the Instagram stories, which she was posting until about 6am.

Woo's twin sister Hayley shared in an Instagram post on Wednesday that Mr Pang told her in their first heart-to-heart conversation last December that he was working hard to earn money so that he could marry Ms Woo when he was around 31 years old.

"I did not have the good fortune to be your sister-in-law in this lifetime," she wrote.

Fellow actor Shane Pow said on Instagram: "It wasn't enough being brothers with you this life. Let's be brothers again next life. I love you my big brother."

Pow's girlfriend, radio presenter Kimberly Wang, added: "Didn't we say that the six of us would go for steamboat after you are back? You are a good man. We will take good care of Jiaqi (Jayley)."

Calling Pang "one of the few young actors that I actually admired", actor Tay Ping Hui said he was "shocked, speechless and truly, truly, truly sad".

Actor Pierre Png wrote: "I am deeply saddened and very angry at the passing of an intelligent, unassuming and hardworking actor. I guess I'll never know why this had to happen."

Actress Zoe Tay said that she felt Pang was mature, steady and very sensible, that she liked him very much and had been looking forward to working together with him.

Close friend and actor Xu Bin posted a black-and-white photo taken on his wedding day, showing Pang smiling in the background as Mr Xu looks at his wife.

"As my brother, you have done countless of things for me. I have yet to do much for you and then you left. I will miss you, my brother forever."

He added in an Instagram post on Thursday morning that he was still in a state of disbelief over news of Mr Pang's death.

Pang had been working on Mediacorp projects on a freelance basis after his contract with the broadcaster ended in April 2017.

Koh was among the media personalities who changed their Instagram profile pictures to black and white on Wednesday.

Pang's profile picture was also changed and a post that appeared to have been written by one of his brothers on behalf of the family went up on the actor's Instagram account late on Wednesday night.

The post said the last few days had been a difficult time for the family.

"Every news that (was) brought upon us since his last op was devastating with little signs of hope on his recovery," the post read. "We all broke down when the medical team spoke to us that his condition is worsening and we should be prepared for the worst.