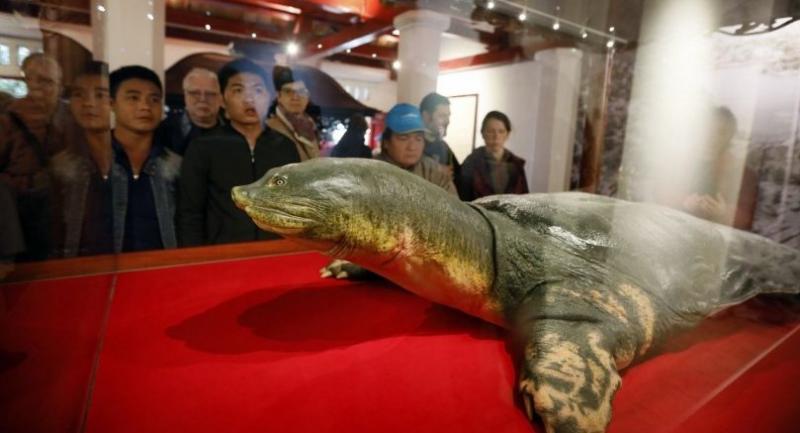 Hanoi - A sacred giant turtle that died in Hanoi's storied Hoan Kiem lake has been given a new lease on life by city authorities who have embalmed the beloved creature for posterity -- and tourist visits.

Hanoians were shocked by the death of the critically endangered Swinhoe softshell turtle in 2016, believing its passing was a sign of ominous times ahead.

The reptile is believed to be the last in a long line of large turtles in the city's central Hoan Kiem lake, revered as symbols of Vietnam's independence struggle according to mythical lore passed down for generations.

Nicknamed "Cu Rua" which means "great grandparent turtle", it was thought to be between 80 and 100 years old when it died.

Visitors welcomed the turtle's resurrection at the popular Ngoc Son temple on Hoan Kiem lake, where the 170-kilogram (375-pound) creature was put on display last week, sitting atop a red carpet in a glass case with an ornately carved wooden frame.

"It's great to see it here. Everyone can admire it now, a symbol of Hanoi," tourist Tran Thi Anh told AFP Thursday.

The enormous creature sits near another which was similarly embalmed and encased in glass in 1968.

They are not the only preserved heroes in Vietnam: the country's revolutionary leader Ho Chi Minh is on display at a sprawling concrete and grass Ba Dinh square in the city's French Quarter.

And in a unique take on the encasing custom, a restaurant owner who served Hanoi's famous pork noodles to the late chef Anthony Bourdain and former US president Barack Obama has preserved their dining table in a glass box.

The turtles on display at Hoan Kiem lake -- which means "Lake of the Restored Sword" in Vietnamese -- are believed to be the protectors of an ancient sword in the green-tinged waters.

According to popular legend, former emperor Le Loi was given the weapon in the 15th century by the lake's Golden Turtle God, which he used to fight off Chinese invaders before returning it to Hoan Kiem.

There are believed to be just four surviving Swinhoe turtles left in the world -- two in a Chinese zoo and two others in Vietnam, according to the Asian Turtles Program.

Superstition is ubiquitous in Vietnam, and any sightings of the giant turtles are deemed auspicious.

The same holds true today for other turtle species living in the lake.

"I just saw some smaller turtles coming to the surface of the lake... it seems good luck to see them, don't you think?" said visitor Nguyen Tri Ton, laughing.

"It's good they embalmed Mr Turtles here to keep them alive for all the people of Vietnam," he added.

Local officials initially tried to suppress news of Cu Rua's death in 2016, fearing it would be seen as bad luck ahead of a party congress to choose the country's top leaders.