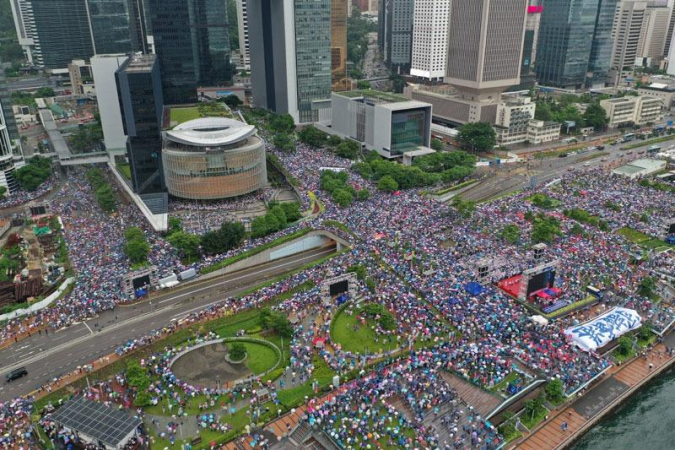 An estimated 316,000 people gathered at Tamar Park in Hong Kong Saturday afternoon to show their support and gratitude to the city’s police force while making a strong appeal for peace and order that were broken repeatedly in recent protests.

Despite the stuffy weather, the participants, mostly dressed in light-colored clothes, were passionate and energetic, chanting slogans while waving signboards and banners along with the national flag and the Hong Kong SAR flag.
They were also heard humming to the tune of well-known songs glorifying the spirit of Hong Kong and values cherished by its people, such as Under the Lion Rock and Pearl of the Orient, when they were played.The rally was held six days after an anti-extradition bill protest broke into violent clashes with the police in the New Town Plaza in Sha Tin. Hundreds of radical protesters threw bricks, umbrellas and bottles at police officers who tried to disperse them.
In contrast, the atmosphere in Tamar Park on Saturday was decidedly peaceful, calm and rational.
The rally started at 5 pm when well-known politicians, academics, celebrities, and representatives of ethnic minority groups were invited on the stage, sharing their thoughts and airing their common wishes.

Tam Yiu-chung – the SAR's sole deputy to the National People’s Congress Standing Committee – thanked the crowd for taking the time and bracing foul weather to show solidarity safeguarding the city they love so much.
“We must not tolerate any action that undermines Hong Kong and the principle of ‘one country, two systems’,” Tam said, drawing a loud cheer of approval from the listening crowd.
There was a roar of support from the crowd when professor of Hong Kong University of Science and Technology Francis Lui Ting-ming said the police should arrest and prosecute those violent protesters who broke the law.
"They're not 'righteous'. They're criminals," said Lui.
Hong Kong entrepreneur Allan Zeman said that Saturday’s rally could send an important message to the world that Hong Kong people could leave their differences behind and “work together to solve problems," Zeman said.
Wong Hei-yin from the trade sector said Hong Kong people who believe in the power of cooperation built on mutual respect and tolerance should make themselves heard loud and clear in a peaceful and rational way.
"We can’t let violent protesters hijack public opinions, protesters who attack the government and undermine the rule of law while hiding their identities behind face masks and helmets," Wong said.
Towards the end of the rally, a group of youth representatives read out a declaration on the stage, appealing to the public to never resort to violence, to talk instead of to argue, and to unite instead of to fight.
The rally ended at around 7 pm as peaceful as it started.