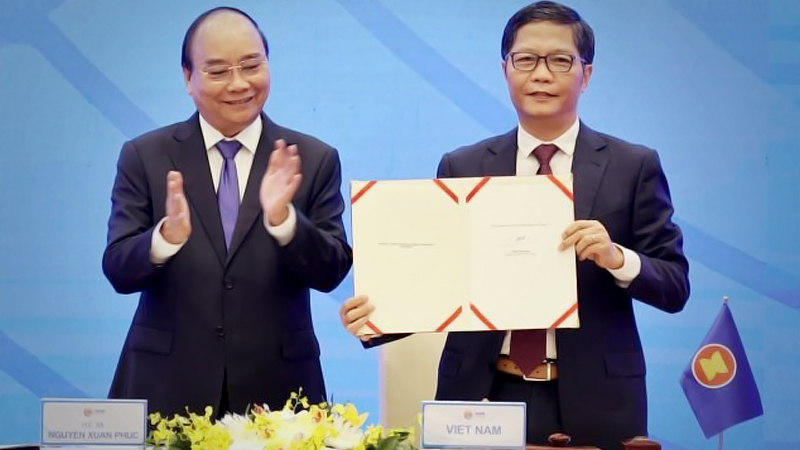 HÀ NỘI — The Regional Comprehensive Economic Partnership, the world’s largest trade pact, was signed on Sunday by leaders of 15 member countries after eight years of negotiations.

The region-wide trade deal which involves ten ASEAN countries, as well as China, Japan, the Republic of Korea, Australia and New Zealand, will contribute to nearly 30 per cent of the world’s Gross Domestic Products of US$26.2 trillion and create a market covering nearly one third of the world’s population.

It is expected to back an open, inclusive and rule-based trade system and create a push for post-COVID-19 economic revitalisation among the member countries.

In his opening remarks at the 4th Regional Comprehensive Economic Partnership (RCEP) Summit held virtually on Sunday, Prime Minister Nguyễn Xuân Phúc said the COVID-19 pandemic has harmed global and regional trade and investment flows, including the countries participating in the RCEP talks.

The global and regional economies are facing huge obstacles and challenges caused by not only COVID-19 but also decreased global trade, he said.

“The conclusion of the negotiations of the RCEP, the largest free trade agreement in the world, will send a strong message of ASEAN’s leading role in supporting the multilateral trade system, helping to create a new trading structure in the region,” PM Phúc said.

Thai Prime Minister Prayut Chan-o-cha praised the signing of this historic free trade agreement, saying the RCEP agreement was not only the largest free trade agreement in the world but was also characterised by its quality and standards, as well as its positive impact towards the upgrading of the competitiveness and increase economic benefits for all members.

Chinese Premier Li Keqiang said the signing of RCEP is "a victory of multilateralism and free trade".

With the largest participating population in the world, the most diverse membership and the greatest development potential, the free trade bloc will inject new impetus into regional development and prosperity, and contribute to global economic recovery and growth, Li said.

Vietnamese Prime Minister Nguyễn Xuân Phúc said after eight years of negotiations, ASEAN and partners have finished an enormous workload and preparations for a new promising face of economic and trade cooperation.

“The RCEP agreement will accelerate the ASEAN economic community building and thereby allowing ASEAN to become dynamic and strong partners in promoting co-operation for shared prosperity.

“The signing ceremony of RCEP today is a very proud and historic milestone within ASEAN countries together with its partners having laid a solid foundation for new era, a comprehensive, enduring and forward-looking cooperation while taking into account the diverse development level of countries in this region, the PM Phúc said at the signing ceremony,

According to Lương Hoàng Thái, director of the Vietnamese Ministry of Industry and Trade’s Multilateral Trade Policy Department, with provisions to reduce or remove tariffs on industrial and agricultural products, the RCEP will help firms in ASEAN member states boost exports, particularly to major trade partners.

Telecommunications, IT, garments and textiles, footwear, and agriculture can take huge advantage of import tariff reductions under the agreement, he stressed.

In an interview with the Vietnam News Agency (VNA) on the sidelines of the signing ceremony,  Minister Anh, who inked the pact on behalf of Việt Nam, said the signing of the deal was a milestone in the economic integration of Việt Nam and other countries.

With commitments to opening markets for goods, services and investment, and the harmonisation of the rules of product origin between the countries, as well as trade facilitation measures, the agreement will create opportunities to develop new supply chains.

The pact will help to establish stable, long-term export markets for Việt Nam and other ASEAN countries, the minister said.

Notably, with new co-operation frameworks in the RCEP and other free trade agreements, ASEAN countries will become trustworthy destinations for international investors, he said.

The conclusion of the RCEP talks and the signing also play a role in promoting ASEAN’s centrality in shaping the regional architecture, the minister added.

According to him, RCEP brings opportunities as well as challenges.

However, he said, recent experience in international economic integration has shown that Việt Nam’s ability to participate in newly-established value chains in the region is increasing along with the country’s administrative procedure reform, facilitating business production and improving the investment environment.

The RCEP is a proposed free trade agreement between the 10 member states of ASEAN and six dialogue partners, namely China, Japan, the Republic of Korea, India, Australia and New Zealand. Negotiations on the RCEP started in late 2012 at the 21st ASEAN Summit in Phnom Penh.

During last-minute talks on November 4 last year, with Thailand as ASEAN Chair, India pulled out of joining the RCEP over unresolved issues, especially those concerning agricultural tariffs. — VNS