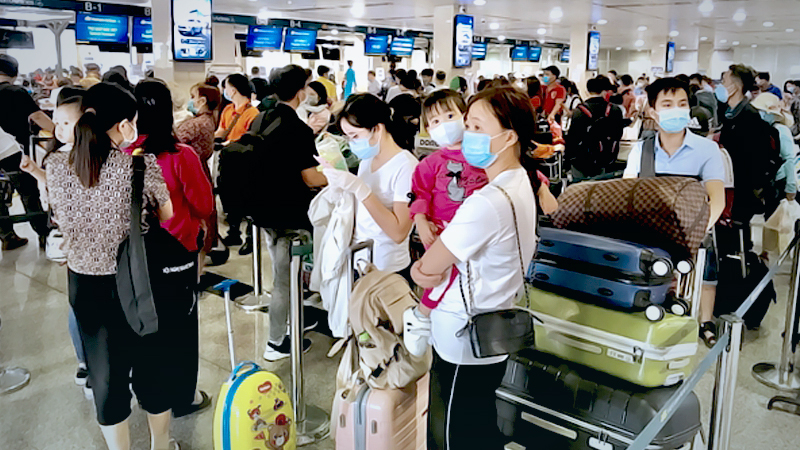 HCM CITY — HCM City authorities are testing arrivals from three major airports in the north (Nội Bài in Hà Nội, Vân Đồn in Quảng Ninh Province and Cát Bi in the northern port city of Hải Phòng) as tens of thousands of passengers are returning after the Lunar New Year holiday.

According to the HCM City Centre for Disease Control and Prevention (CDC), as of February 14, some 200 samples had been taken each day for testing on a random basis at Tân Sơn Nhất International Airport in HCM City.

The move is part of the city’s effort to monitor community transmission cases. Four hospitals, including Nguyễn Tri Phương, Ear Nose and Throat, Hùng Vương, and Traditional Medicine, have participated in the screening.

Since February 11, the city has also tested people considered at high-risk of contracting the virus at bus stations, wet markets and some rental housing units in order to monitor the risk in the community.

In addition, the HCM City CDC has been conducting testing at hospitals across districts since September 15.

To ensure safety for passengers at Tân Sơn Nhất, airport staff must be tested one day before their working shifts.

More than 1,600 families of employees of the Vietnam Airport Ground Sevices Company Limited (VIAGS) have also been asked to test, as of February 10.

The main cluster of cases at the airport was related to VIAGS.

According to the HCM City-based Hospital for Tropical Diseases, the virus strain (A.23.1) associated with the Tân Sơn Nhất airport outbreak was first found in the African country of Rwanda in late October.

This is the first time that the Rwanda variant has appeared in Việt Nam and Southeast Asia. It is not the highly contagious UK variant (B.1.1.7) or the variant detected in South Africa.

The Rwanda variant has been discovered in a few other countries such as the US, the United Arab Emirates (UAE), Australia, and several countries in Europe, including the UK and Denmark. However, no “abnormal developments” have been reported in those countries.

Based on an analysis, experts believe the Rwanda variant is likely to have infected the staff at Tân Sơn Nhất airport through cargo flights.

Dr. Phan Trọng Lân, director of the HCM City Pasteur Institute, said: “The most likely hypothesis is that the strain originated from cargo flights from the United Arab Emirates.”

Cargo crew members are not subject to quarantine and testing because they are not allowed to get off the plane, he added.

During this period, flights from the United Arab Emirates arriving at Tân Sơn Nhất airport were possibly the source of infection for the loading staff on the ground, who had contact with aircraft crew members.

Lân noted, however, that the risk of infection from outside the airport cannot be ruled out, but it is unlikely to be the source.

According to the HCM City CDC’s initial assessment, most of the patients related to the Tân Sơn Nhất outbreak had no symptoms or very mild symptoms. Many cases have tested negative quickly after a few days of treatment at hospitals.

The centre said it would work with experts to collect data on epidemiology, clinical signs, antigens, antibody test results, and sequencing genes to learn further about the cases.

Since the first case was detected at the airport, the city has recorded 36 COVID-19 cases as of February 16, including 10 patients who are loading staff at Tân Sơn Nhất airport and 26 cases who are family members of the loading staff.

City authorities have imposed a strict lockdown on areas that are related to the cases. All non-essential services and entertainment, and cultural and sports activities have been suspended until further notice.

“The infection chain at Tân Sơn Nhất hotspot has basically been contained,” according to the HCM City CDC.

The city is continuing to conduct extensive screening in the community to assess the risk of disease. — VNS