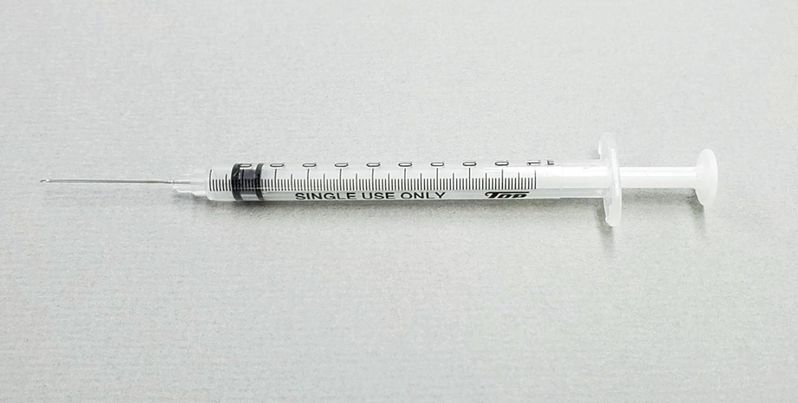 Two Japanese medical device manufacturers have developed syringes that can draw seven doses from a single bottle of the novel coronavirus vaccine made by U.S. pharmaceutical giant Pfizer Inc., more than the previously estimated number of five or six doses.

The Health, Labor and Welfare Ministry has approved the syringes, and the two companies plan to supply a combined total of more than 40 million by the end of fiscal 2021. The government is expected to consider procuring the syringes.

The Pfizer-BioNTech vaccine is diluted with normal saline to produce 2.25 milliliters of the medication in one bottle. For a single dose, 0.3 milliliters is drawn into a syringe for an intramuscular injection.

Theoretically, seven doses can be drawn from one bottle if little is wasted. However, five doses have been the limit when common syringes are used, because liquid tends to remain in the tip. Even special syringes were said not to be able to draw out more than six doses.

One of the new syringes, developed by the Tokyo-based company Top Corp., was approved by the Health, Labor and Welfare Ministry in February after it was confirmed in tests that the syringe can withdraw seven doses from a bottle.

Top Corp. plans to begin shipments of the new syringe as early as May and expects to supply 20 million units by the end of 2021. It plans to increase shipment volume to 50-60 million annually from 2022 on.

Terumo Corp. also obtained approval from the ministry on March 5 for an improved type of syringe that can withdraw seven doses. The Tokyo-based company will begin manufacturing and shipping the syringes, and plans to supply 20 million within fiscal 2021.

Nipro Corp., based in Osaka Prefecture, is also working on the development of a similar syringe and is considering launching mass production in this year.