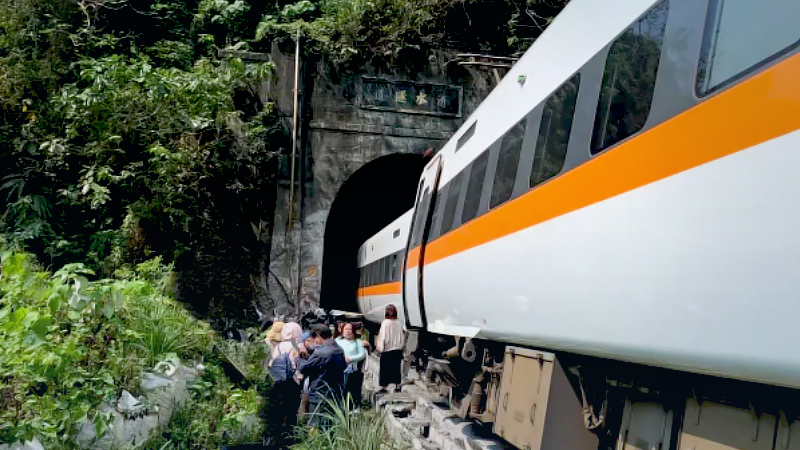 TAIPEI (AP) — A passenger train smashed into a truck on its tracks and partially derailed outside a rail tunnel along Taiwan’s east coast Friday, killing 34 people and injuring dozens, local police said. Survivors were climbing out windows and onto roofs to reach safety.

The crash occurred near the Toroko Gorge scenic area around 9 a.m. on a public holiday.

Reports said a truck fell from a cliff above and landed on the tracks, where a train emerging from a tunnel smashed into it. With much of the train still trapped in the tunnel, escaping passengers were forced to scale doors, windows and roofs to reach safety.

The truck apparently hit after the locomotive had emerged, causing the greatest damage to cars 1-5, according to the rescue department of Hualien county.

Television footage and photos posted by people at the scene on the website of the official Central News Agency showed people climbing out the open door of a railcar just outside the entrance to the tunnel. The inside of one car was pushed all the way into the adjacent seat.

The accident came on the first day of the four-day Tomb Sweeping Festival.

Taiwan’s last major rail crash was in October 2018 when an express train derailed while rounding a tight corner on the northeast coast, killing at least 18 people and injuring nearly 200.

In 1991, a collision in western Taiwan killed 30 people and injured 112 in its deadliest train accident.