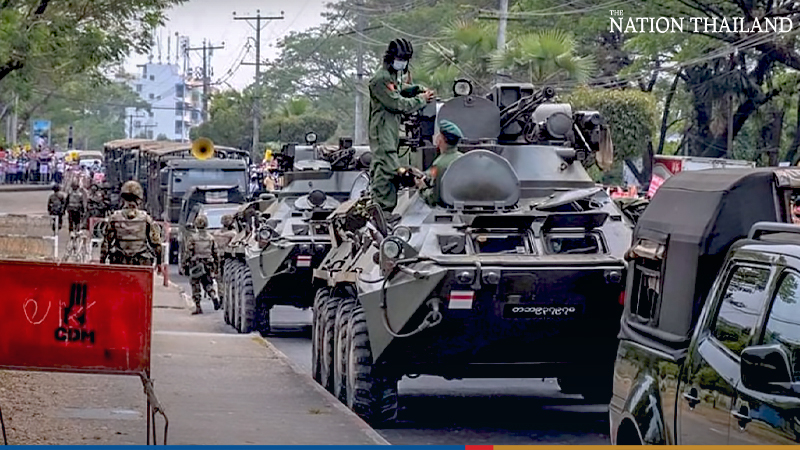 Myanmar's ruling military on Friday said it believed government operations would soon return to normal, as public participation in protests and strikes against the junta was waning.

In a televised news conference, junta spokesman Zaw Min Tun said the military council was working to achieve peace and security in the whole country and there would be full operations of ministries soon, Reuters reported.

He also said international trade continued as normal and reports that the international community did not recognise the military government were fake.

Meanwhile, the UN's special envoy for Myanmar is to embark on an Asian tour to step up diplomatic efforts to tackle the crisis, as the death toll from the junta's crackdown on dissent passed 600 on Friday, AFP reported.

Burgener will start her trip in Thailand and will also visit China, though exact details and timings for her trip have not been confirmed.

At least 614 civilians have been killed in the military's crackdown on protests and nearly 3,000 arrested, according to the Assistance Association for Political Prisoners, a local monitoring group.

There was more bloodshed early on Friday, with rescue workers reporting at least four people killed when security forces broke up protest barricades in the city of Bago, 65 kilometres (40 miles) northeast of Yangon.

UN rights officials say the military is making increasing use of heavy weaponry including rocket-propelled and fragmentation grenades, heavy machine guns and snipers.

The violent response has drawn intense international criticism and on Thursday Washington imposed another set of sanctions, this time on Myanmar's state gem company, as it seeks to deprive the junta of sources of income.

UN envoy Burgener wants face-to-face meetings with the generals but she has not received permission to visit Myanmar. "She, of course, stands ready to resume dialogue with the military to contribute to a return to Myanmar's democratic path, peace and stability," UN spokesman Stephane Dujarric said. As well as China -- a key player with historical links to the military and which more recently cultivated close relations with Suu Kyi -- Burgener also hopes to visit member countries of regional bloc ASEAN.

"As she has highlighted repeatedly, a robust international response to the ongoing crisis in Myanmar requires a unified regional effort involving neighbouring countries who can leverage influence towards stability," Dujarric said. An ASEAN summit on Myanmar is scheduled for the end of the month, but diplomats say the bloc is deeply divided over the crisis.

"At one end, there are Thailand, Laos and Cambodia, who are in the mode of 'back off, there's nothing to see, it's a question of internal politics,'" one diplomat said, while Singapore, Malaysia and Indonesia are open to a more active role for ASEAN.

The UN Security Council is set to meet informally Friday to hear from Myanmar lawmaker Zin Mar Aung on behalf of the CRPH group, which represents the deposed civilian government.  Earlier this week the CRPH, which says it has amassed nearly 300,000 pieces of evidence showing rights abuses by the junta, began talks with the UN's Independent Investigative Mechanism for Myanmar.

The military has defended seizing power, pointing to what it said was fraud in November's election which Suu Kyi's National League for Democracy won comfortably.