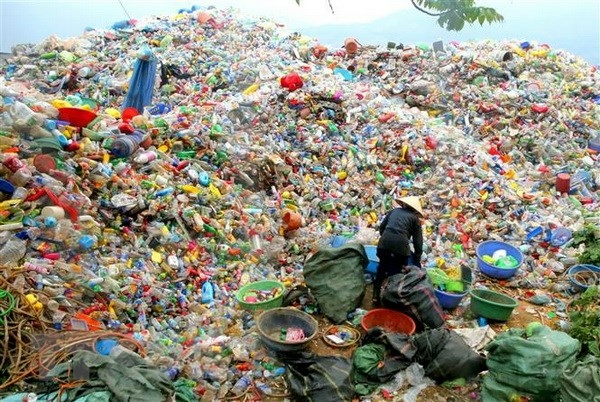 Delegates presented work between the Ministry of Natural Resources and Environment (MONRE), the Delegation of the European Union to Việt Nam and Expertise France on policy development as well as recommendations for four pilot projects in HCM City, Hà Nội and Phú Yên Province, which aim to reduce the amount of plastic that ends up untreated on land and in the oceans.

The initiatives included enhancing plastic packaging collection, sorting and recycling, encouraging fishermen to collect plastic waste caught while fishing, establishing an alliance of supermarkets to reduce the use of single-use plastic bags, and managing waste in ports.

“The Vietnamese Government and the MONRE have shown strong political commitments affirming that we have always given high priority to finding both short and long-term solutions to reduce plastic pollution and foster economic development,” said Director-General of the International Cooperation Department of the MONRE Phạm Phú Bình.

“The circular economy solution to marine plastic litter can be an important contribution to support the implementation of the National Action Plan and helps Việt Nam achieve its goals. Experience and lessons learned from the project and pilot activities will serve as a basis to expand to other localities and aim to inform policy development initiatives,” he said.

The circular economy means markets that give incentives to reusing products, rather than scrapping them and in such an economy, all forms of waste are returned to the economy or used more efficiently, according to the United Nations definition.

Talking about the circular economy, Rui Ludovino, First Counsellor, Climate Action, Environment, Employment and Social Policies at the Delegation of the European Union to Việt Nam, said: “We must move towards a circular economy for plastics, an economy in which resources are used and managed more efficiently and more sustainably. Through the Rethinking Plastics project, we work closely with Việt Nam to prevent marine plastic litter and share regional and European experiences,” he said.

The four pilot activities complement these efforts towards a circular economy with concrete actions and experiences from the local level, involving communities and households, local businesses and administrations, he added.

These activities are run within the 'Rethinking Plastics – Circular Economy Solutions to Maritime Litter' initiative,  which is implemented by Expertise France with the financial support of the European Union and the German Federal Ministry for Economic Cooperation and Development.

Việt Nam has been confirmed as the world's fourth-largest marine plastic polluter after China, Indonesia and the Philippines. Each year, the country dumps an estimate of 300,000-700,000 tonnes of plastic waste into the ocean per year, accounting for 6 per cent of the world's marine plastics.

The country has set the target to have zero disposable plastic waste by 2025.

It has adopted a development strategy to promote the maritime economy in parallel with protecting maritime environment and ecosystems, specifying "preventing, controlling and significantly mitigating marine environmental pollution; being a regional pioneer in reducing ocean plastic waste" among the country’s objectives for 2030. — VNS