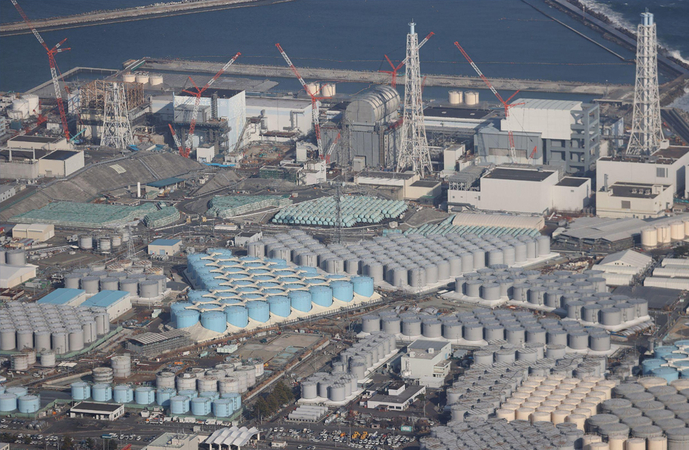 Tokyo (Jiji Press)—The Japanese government on Tuesday decided the release into the ocean of treated radioactive water from the disaster-stricken Fukushima No. 1 nuclear power station.

The decision, made at a meeting of relevant ministers, came as the government of Prime Minister Yoshihide Suga aims to accelerate work to decommission the Tokyo Electric Power Company Holdings Inc. plant in Fukushima Prefecture, northeastern Japan, despite strong opposition from the fisheries industry, which is concerned about reputational damage to marine products from the water release into the ocean.

The government hopes to start the ocean release of the water after about two years of necessary preparations.

It plans to take all possible measures to deal with potential unfounded rumors about the safety of local marine products, such as helping expand seafood sales channels.

But the ocean release of the water could spoil Fukushima fishers’ efforts to resume full-scale operations after suffering damage from the March 2011 earthquake and tsunami, which caused an unprecedented triple meltdown at the nuclear plant. In addition, the reconstruction of areas hit by the disaster could be affected if the regional communities’ efforts to expand shipments of locally produced agricultural, forestry and fisheries goods are foiled by the water release operations.

The government plans to instruct TEPCO to pay compensation to businesses and others in any regions and industries affected by unfounded rumors that could occur following the water release into the ocean.

Moreover, the water disposal method is expected to draw anger from nearby countries, such as China and South Korea.

Suga said: “We will aim to ensure safety that is higher than standards. The government will make all-out efforts to deal with unfounded rumors.”

At the nuclear power plant, operations to cool damaged reactors are continuing and groundwater is flowing into the buildings for the reactors, resulting in the creation of radiation-tainted water every day. How to dispose of the tainted water has been a serious issue.

More than 1,000 tanks built at the plant’s premises to hold the treated water are expected to reach full capacity in autumn 2022, according to TEPCO.

Concerned that the nuclear plant decommissioning could be hampered if work to dispose of the water stalls, the government plans to gradually release the treated water into the ocean after diluting the levels of tritium in it to about one-40th of the state-set standard of less than 60,000 becquerels per liter using seawater, based on a report from an expert panel, which termed the ocean release as a realistic way of disposing of the water.

The government has been stressing the safety of the water release operations, saying that the levels of tritium after the dilution are even lower than those set under the World Health Organization’s drinking water guidelines.

The government aimed to formalize the ocean release plan in October last year.

But it postponed the decision in the face of opposition from fishers and a flurry of public comments voicing safety concerns.

To break the stalemate, Suga met with Hiroshi Kishi, head of the National Federation of Fisheries Cooperative Associations, on Wednesday last week. After the meeting, the prime minister said that the government would make a decision soon on how to dispose of the treated water from the Fukushima No. 1 nuclear power station.

Meanwhile, Kishi told Suga that there is no change in the fisheries industry’s stance of opposing the ocean release.

Ocean releases of treated water from nuclear plants are conducted in other countries. But the situation at the Fukushima No. 1 plant is different in that the water there has touched melted nuclear fuel debris.