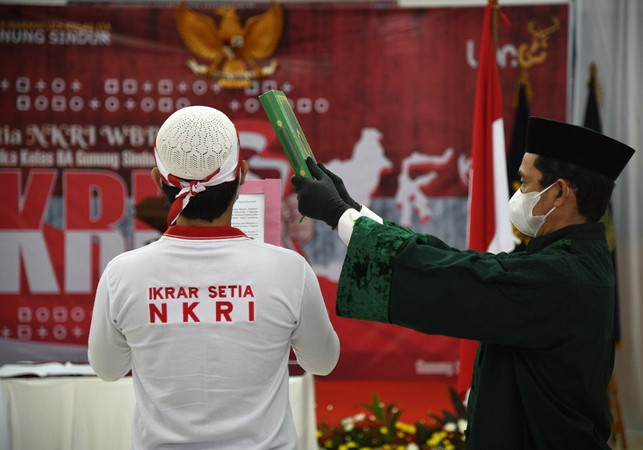 Terrorist groups have conducted 11 attacks since the beginning of the COVID-19 pandemic last year. These attacks resulted in the killing of two police officers, seven civilians and seven terrorists, and injuring three police officers and 20 civilians.

Two of the most recent attacks took place in South Sulawesi and Jakarta. On March 28, two members of JAD conducted a suicide attack on a Catholic church in the South Sulawesi capital of Makassar, killing them and wounding 20 people. Several days later, equipped with an airsoft gun, a young woman, Zakiah Aini, attacked the National Police headquarters in Jakarta with herself as the only casualty.

These 11 attacks highlight five important indications about the current terrorism developments in the country.

First, although JAD only conducted three attacks, its attacks attracted more attention than MIT’s attacks because they employed families to conduct the attacks and that their attacks were dispersed around Indonesia, namely in South Kalimantan, Central Java and South Sulawesi whereas the attacks conducted by MIT were limited to Central Sulawesi.

Additionally, JAD’s attacks, especially the ones that included bombings, were deadlier than attacks by MIT. JAD’s Makassar suicide attack alone could have resulted in the killing of 20 civilians had it not been for the church’s security guard stopping the perpetrators from entering the church premises and detonating their explosives there.

Previously, on May 13, 2018, JAD members conducted a series of similar suicide attacks on churches and a police station in Surabaya killing at least 20 people including the perpetrators and their accomplices consisting of three families; 10 family members in total.

Second, despite their threats of attacking Chinese nationals during the pandemic, police, police informants and non-Muslims remained the main target of Indonesian terrorists. The police remain as targets as they continue to prevent terrorists from achieving their goals of enforcing Islamic law and establishing an Islamic state based on their interpretations. This is in addition to the arrests and killing of JAD members by the police. Non-Muslims are targeted because the group is following the call issued by IS-Central to attack “God’s enemies” in March 2020 in their al-Naba newsletter.

Third, though the pandemic has reduced the amount of funds channeled to these terrorist groups, this has no impact on their motivation to conduct attacks. In the first half of 2020, these groups experienced a reduction in financial contributions of up to 72 percent as compared to what they received in 2019. This reduction is due to the loss of jobs and dwindling businesses experienced by their members and donors. To alleviate this financial constraint, groups have turned to robbery. Subhan’s group planned to rob a bank and stores owned by Chinese Indonesians in Central Java in March 2020. However, their plans were foiled with their arrests prior to executing their plans. Conversely, MIT successfully robbed health department officers in Poso in August 2020. They seized food and electronic devices carried by the officers without inflicting any casualties.

Despite their dire financial problem in the first eight months of the pandemic, their commitment to conducting attacks is unaffected as evident from the increasing number of attacks during this period. As compared to the eight attacks in 2019, there were 11 attacks since the start of the pandemic.

Fourth, from January to April 9, 2021 police have arrested 112 terrorist suspects. However, this does not mean a lack of foot soldiers for terrorist groups because recruitment continues to take place both offline and online. Additionally, an estimated 1,000 official JAD members remain free despite their obvious affiliation to the IS and their support for the terrorist attacks conducted by their fellow members. For this reason, we should expect new perpetrators to surface from these recruitments.

To prevent future terrorist penetration, the government needs to secure its facilities with a security system like that implemented at airports. This requires the government to install x-ray machines and full body scanners in its facilities. The government also needs to improve its database and surveillance of terrorists to detect and disrupt their plans prior to fruition.

The government should also issue a law making it mandatory for JAD members who are still free and their associates to participate in the deradicalization programs conducted in these centers. The program participants should be assessed to have completed the programs only when they have abandoned extremism completely. Therefore, these programs should not be constrained within a specific timespan. This means that the participants should attend these programs until they are assessed to be deradicalized.

Second, the government needs to empower local governments and civil societies to help the central government run deradicalization programs in the centers. Such empowerment includes providing trainings to ensure that they can run both nationally standardized and individually tailor-made programs.

*** Irfan Idris is the director of deradicalization at the National Counterterroism Agency (BNPT) and Ardi Putra Prasetya is a PhD student at the University of Indonesia. The views expressed are personal. The original article was published in Stratsea.