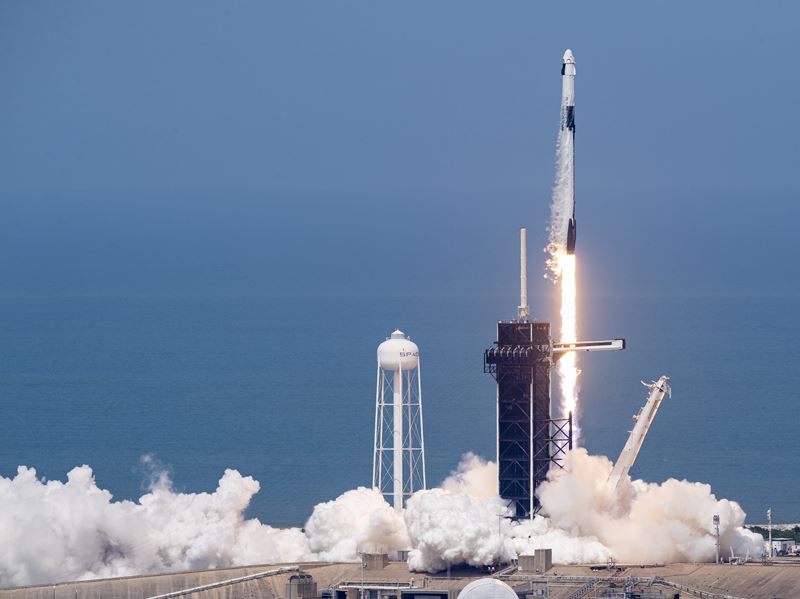 Elon Musks SpaceX is about to fly astronauts for a third time, but there is nothing routine about it

When Megan McArthurs husband, Bob Behnken, flew to space almost a year ago, she watched from the ground with their 6-year-old son. As an astronaut herself, she was optimistic and proud, especially since it was the first flight of NASA astronauts from U.S. soil in nearly a decade.

But she was also fearful.

"One of the hardest things to do is watch the person that you love launch into space," she said in an interview. "It's much harder than actually doing it yourself when you're in the rocket. You have the training. You're prepared for the mission. When you're watching, you're just a spectator. And no matter what happens, there's nothing you can do to contribute to the situation."

Now, it's McArthur's turn to fly - and Behnken's turn to spend that fretful time on the ground with their son, now 7.

If all goes well, McArthur will be strapped into SpaceX's Dragon spacecraft along with the rest of the astronauts known as Crew-2 - NASA astronaut Shane Kimbrough, Thomas Pesquet of France and Akihiko Hoshide of Japan - for a launch to the International Space Station scheduled for 6:11 a.m. Thursday from the Kennedy Space Center in Florida.

The flight will be SpaceX's third with astronauts aboard. Last May, it flew Behnken and NASA astronaut Doug Hurley in a short test flight to the station. Then, in November, it flew a regular crew of four for a full-duration mission of about six months, restoring regular transportation to the station from U.S. soil after the retirement of the space shuttle fleet in 2011.

That group of astronauts, known as Crew-1, is expected to overlap with Crew-2 on the space station for about a week before coming back to Earth in a return flight scheduled to splash down in the Atlantic Ocean or Gulf of Mexico on April 28.

That flight cadence stands in stark contrast with that of Boeing, the other company under contract with NASA to develop spacecraft capable of flying astronauts to and from the space station. Boeing has not flown for nearly a year and a half, after its Starliner spacecraft suffered a software malfunction that made the spacecraft think it was 11 hours later in a test mission without any astronauts aboard than it actually was. The company was able to bring the spacecraft down safely and said it would repeat the test before flying a mission with astronauts.

The company recently said it would be ready to fly as early as May. But because of traffic on the space station and the availability of the launchpad it uses, Boeing does not expect the launch to occur until August or September. Still, it said in a statement that it "will be mission-ready in May should another launch opportunity arise."

It is not clear when Boeing's first flight with astronauts aboard will be.

SpaceX, meanwhile, is moving ahead with its launch schedule, which includes another flight with a crew later this year. For the flight Thursday, it is incorporating a key difference: The rocket and the spacecraft that will fly the crew have been flown before, marking first time NASA has allowed SpaceX to reuse its hardware in a human spaceflight.

Instead of throwing away its rockets, as had been done in the space industry for years, SpaceX flies them back to Earth, where they land on ships at sea or on a landing pad near the launch site. SpaceX has been doing it for years now, perfecting a practice once thought impossible.

But it only recently convinced NASA that it should be allowed to use its boosters and spacecraft again with humans aboard.

SpaceX will use the same Falcon 9 rocket that flew the Crew-1 astronauts. It stands on Launchpad 39A not shiny white and new but bearing the sooty streaks from the previous launch. The Dragon spacecraft for the flight is the same one that Behnken and Hurley flew in their mission. McArthur will be sitting in the same seat Behnken occupied for his flight.

SpaceX's goal is to get to something similar to airline-like efficiency, where rockets and spacecraft take off, land and fly again. But space presents all kinds of different challenges, particularly for the capsules, which come screaming back through Earth's atmosphere, generating temperatures in the thousands of degrees. Then they splash into the ocean under parachutes, which poses its own problems.

"One of the things you have to worry about is water intrusion," Benji Reed, SpaceX's senior director of human spaceflight programs, said during a recent press briefing. "Saltwater is very corrosive. It's not a great thing when you want to keep your physical materials sound and especially easy to refurbish and to reuse."

After the spacecraft, dubbed Endeavour, came back last year, SpaceX inspected it to make sure it was safe to fly again. The company replaced some parts, Reed said, and the thermal protection system and the parachutes for this coming flight will be new as well. "But otherwise, it's really the same vehicle," he said. "That's very carefully inspected, carefully prepared, refurbished as needed and ready to fly."

He added that NASA signs off on the vehicle and ensures that it is safe to fly. In the days and weeks leading up to the launch, officials from NASA and SpaceX repeatedly said that while this will be the third mission with people, the flight is by no means routine and the serious risks inherent in all human spaceflight remain.

"We've completed thousands and thousands of tests to get to this day," Reed said.

The company has pored over the data and performed intensive reviews alongside NASA, always looking for the worst-case scenario, trying to find it in a spreadsheet or an engine-test stand before a flight.

"We call them paranoia reviews. We want to be paranoid," Reed said. "We want to make sure that we're going to fly these people safely and be able to bring them home safely when it's time. So we check. We check under every rock. And we double-check and we triple-check and we ask each other and we challenge each other all the time."

He said that he feels responsible not only for the astronauts but their families as well, and that he and the engineers kept McArthur's 7-year-old son, Theo, in their minds when preparing for the mission.

"In particular in my heart, there's a little boy out there whose mom is flying," Reed said. "This is something that we pay a lot of attention to. We ask ourselves all the time: Would we be willing to fly our families on these vehicles? That's kind of a test for us."

Before Behnken's flight last year, he and McArthur took their son to Cape Canaveral for a launch so he could see the rocket take off and give him a sense of what his parents were about to do. He was excited for the flight and thrilled when Behnken returned home safely from the mission - in part because his parents had promised him a puppy once the flight was over.

Now he's looking forward to another flight. But the splashdown will be better than the liftoff.

"I think he'll mostly be thrilled when I come home again," McArthur said. "That would be the best part for him."