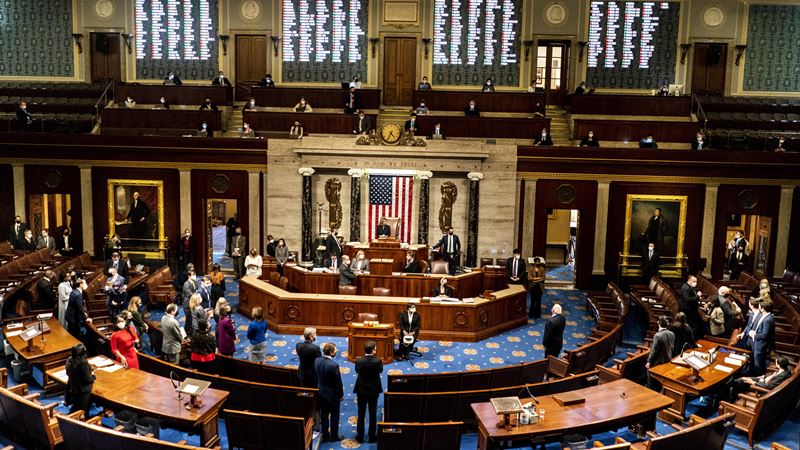 WASHINGTON - When 10 Republicans voted to impeach President Donald Trump on Jan. 13, it marked a historic milestone: It was the most House members from a presidents party to vote to remove him from office.

But since that vote, the 10 lawmakers have cut different paths in grappling with the fallout as they consider their political futures in a party still beholden to Trump.

Reps. Liz Cheney, R-Wyo., and Adam Kinzinger, R-Ill., have made their votes career-defining, arguing that pushing back against Trump's false assertions that the 2020 election was stolen is about protecting democracy and the soul of the Republican Party.

Others, such as Reps. Anthony Gonzalez, R-Ohio, Jaime Herrera Beutler, R-Wash., and Peter Meijer, R-Mich., have vocally defended their votes and Cheney amid a caucuswide push to oust her from leadership, though they have not sought to make it a marquee issue.

The rest have quietly moved on, even if they stand by their decision, seemingly in line with House GOP leadership's argument that what is important now is opposing President Joe Biden's agenda and regaining the majority in the 2022 midterms, not what happened after the 2020 election.

If Cheney is ousted from her leadership post this week as expected, it would highlight how much the January vote to impeach Trump by the 10 GOP lawmakers was not the start of some bigger movement, but a momentary blip of resistance in a party that has been wedded to Trump since he entered the White House in 2017 and remains loyal to him still.

"He revels in score-settling, so most of these folks have smartly just tried to keep their heads down. Cheney has taken a different approach, and while it's super commendable, he will take great pleasure in seeing her removed from power," Brendan Buck, who served as an adviser under former House speaker Paul Ryan, R-Wis., said of Trump. "They'll all have targets on their back, but Cheney really sent up a flare to attract his ire, and I'm sure they're watching and learning."

Cheney has increasingly been at odds with her party and fellow House GOP leaders over her decision to continuously call out Trump on his false claims that the election was stolen and his role in the Jan. 6 Capitol attack. She has made clear she will not stop, and her colleagues are expected to vote her out of leadership during a conference meeting Wednesday. Rep. Elise Stefanik, R-N.Y., is expected to replace her as House GOP conference chair, the No. 3 position in leadership.

In a letter sent to his Republican colleagues on Monday, House Minority Leader Kevin McCarthy, R-Calif., said it was time for Cheney to go.

"All members are elected to represent their constituents as they see fit, but our leadership team cannot afford to be distracted from the important work we were elected to do and the shared goals we hope to achieve," he wrote officially announcing the vote to remove Cheney from leadership.

Mutual respect for casting a consequential vote has bonded the 10 pro-impeachment House Republicans, as has the backlash they have received for rebuking Trump. Eight of the 10 have been censured by the Republican Party in their states, with Gonzalez most recently being admonished and facing calls to resign.

In the early days after the vote, some of the 10 flirted with the idea of banding together to make joint statements on consequential issues, believing they could have influence based on their moral authority.

But the only public position nine of them took as a unit was sending a letter to House Speaker Nancy Pelosi, D-Calif., to express opposition to an investigation into whether to overturn a razor-thin result in Iowa's 2nd Congressional District. They argued that such a move would further undermine trust in the electoral system and noted that they voted to impeach Trump because "the integrity of our election system was being attacked and trust in it was being eroded - with disastrous consequences."

Although they never did much as a group once it became clear that opposing Trump was increasingly treacherous, some of these lawmakers, or aides familiar with their views, said the takedown of Cheney has been demoralizing to watch.

"I think it's very much viewed as a massive defeat," said one of the 10 lawmakers, who spoke on the condition of anonymity to share candid views in a tense political climate. "Having someone in leadership was validation and proof . . . that even though Trump was attacking us, we still have leadership backing us and are allowed to survive within the conference."

The 10 who voted to impeach Trump were Reps. Cheney, Kinzinger, Gonzalez, Herrera Beutler, Meijer, John Katko (N.Y.), Fred Upton (Mich.), Dan Newhouse (Wash.), Tom Rice (S.C.) and David G. Valadao (Calif.). Many of them, with the exception of Cheney, represent competitive districts. She faces a primary challenge fueled by Trump's call to get rid of her. Seven Senate Republicans voted to convict Trump, but they have been given more slack by their Senate peers, and only one, Sen. Lisa Murkowski, R-Alaska, is up for reelection next year and faces a Trump-backed challenger.

Most of the 10 House lawmakers stand at a crossroads in figuring out how to navigate the reality that their party has embraced Trump's falsehoods and their own political futures and consciences.

Even those who have publicly voiced support for Cheney have said privately that they find it difficult that a majority of their colleagues do not want to acknowledge Trump's role in undermining democracy, but also find it counterproductive to constantly attack him.

"It's not entirely effective to go after Donald Trump every time he puts out a statement because we understand he's a force in the Republican Party," said a Republican aide who works for one of the 10 members and, like others, spoke on the condition of anonymity because they were not allowed to speak on the record. "When pure falsehoods are said, you have to call that out, but at the same time, doing so repeatedly gets you into this vicious cycle where eventually constituents will really start to wonder, 'What are you actually focusing on and doing in Congress?' "

Many Republicans loyal to Trump said over the past week that their problem with Cheney wasn't her vote to impeach, but her decision to continue challenging the former president, which they referred to as a "distraction" or "unproductive." They have ignored that Trump frequently brings up his election loss and hardly seems ready to move on. Party leaders have given him a pass because, they have said, they cannot win back the House without Trump and his base of supporters strongly involved.

Neither McCarthy nor Minority Whip Steve Scalise, R-La., have recently told the other nine to fall in line, but the message from leadership is clear: You will not be punished for your Jan. 13 vote, but making an issue of it and antagonizing Trump will not be tolerated.

This message has been underscored with one of the purest expressions of love and support on Capitol Hill - campaign cash. Leadership PACs associated with McCarthy have contributed to the reelection campaigns of Katko, Meijier, Valadao, Upton, Gonzalez and Herrera Beutler. McCarthy has every incentive to see those members - who are mostly from swing districts - reelected, in hopes they will support him for speaker if Republicans win the House.

Members of the pro-impeachment 10 have been generous with one another, too. Federal Election Commission records show their political action committees have contributed to the reelection campaigns of other pro-impeachment members. Valadao is slated to appear at a fundraiser in Washington state next month for Newhouse.

Rep. Jim Banks, R-Ind., leader of the conservative Republican Study Committee, was one of the first in recent weeks to publicly suggest that Cheney head for the exits, but he has also made clear that there is a place in the party for members who embrace its agenda, while minimizing their impeachment vote. He pointed to Rice as an example of someone who has traveled this path and has embraced Banks's argument that the party needs to fully embrace the working-class voters who went for Trump.

Rice's vote to impeach was a surprise, and he has been mostly quiet about it. He was the only one of the 10 not to sign the letter to Pelosi about the Iowa race.

In a statement to The Washington Post, Rice credited Trump for hastening the move of White working-class voters to the GOP but said he continues to support keeping Cheney in her post.

"I support Liz Cheney. She is a very good leader, thoughtful and strong. She has a right to her opinion regarding President Trump. Her opinion has nothing to do with her qualification as our conference chair," Rice added.

Other members have avoided getting involved in the Cheney fight, while making clear they are on board with moving forward when she is gone.

"If something happens with Liz - and that remains to be seen - but if it does and [Stefanik] puts her name into the ring, I will absolutely support her," Katko said on a call with reporters Friday. "She knows that if we ever want to be back in control of Congress again, people like me have to win and we have to flourish and we have to have a big tent as the Republican Party."

Valadao's office said it "will not be responding" to questions about whether he will support Cheney staying in leadership during Wednesday's closed caucus vote. The offices of Upton and Newhouse did not respond to a request for comment.

Stefanik has been courting the support of the impeachment group and placed calls to some of them over the weekend, according to one of the lawmakers.

Kinzinger, meanwhile, continues to work the cable news and Sunday morning news circuits, but the scope of his influence remains unclear.

"Right now it's basically the Titanic," Kinzinger said of the party Sunday morning on CBS News's "Face the Nation." "We're like, you know, in this - in the middle of this slow sink. We have a band playing on the deck, telling everybody it's fine, and, meanwhile, as I've said, you know, Donald Trump's running around trying to find women's clothing and get on the first life boat."