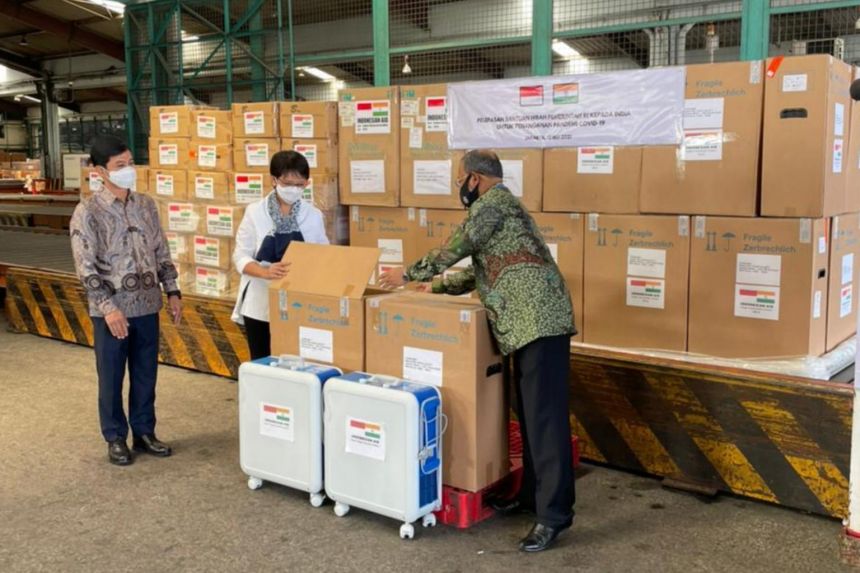 JAKARTA - Indonesia has sent 200 oxygen concentrators to India, which is grappling with a devastating second wave of Covid-19 infections.

Indonesian Foreign Minister Retno Marsudi said that the humanitarian assistance is an expression of Indonesia's solidarity with India - a close, long-time friend and strategic partner - in its battle against the pandemic.

She noted that throughout the pandemic, India had facilitated the delivery of much-needed medical supplies to Indonesia and supported the procurement of vaccines under the multilateral Covax facility.

Under Covax, Indonesia has received 6.41 million doses of the ready-to-use vaccines made by British-Swedish drugmaker AstraZeneca in its India-based production facility.

"Indonesia is always grateful for India's support during this pandemic. Now is the time to show our support," Ms Retno said at the send-off ceremony for the aid on Wednesday (May 12) at Soekarno-Hatta International Airport.

"Indonesia will stand with India in this difficult time, and we are committed to sharing the burden with the Indian people. After all, a friend in need is a friend indeed," she said.

The Indian Ambassador to Indonesia, Mr Manoj Kumar Bharti, was present to accept the aid at the ceremony.

India reported 348,421 fresh Covid-19 cases on Wednesday , and deaths surged to a daily record of 4,205. The total number of infections has risen to more than 23 million, with a quarter million fatalities. International health experts have warned that a variant of the coronavirus in the world's second most populous country is cause for global concern.

On Monday, the Indonesian business community, along with Indian companies operating in Indonesia, sent 1,400 oxygen cylinders to India. Another 2,000 cylinders are scheduled to be dispatched next month.

Indonesia has joined more than a dozen of countries, including Singapore, Britain, France, Germany, the US and Saudi Arabia, which have delivered oxygen and oxygen-related equipment as India continues to struggle to come to grips with the health crisis.

Mr Bharti on Tuesday expressed gratitude for the assistance from Indonesia, which he described as "India's closest maritime neighbour".

"I would like to thank the government of Indonesia for the timely assistance extended to India in its headlong fight against this pandemic and express my appreciation for the requisite timely coordination done by all its ministries, particularly the Foreign Ministry, the Industry Ministry and Ministry of Health, towards this end," Mr Bharti said.

"I'm confident that together, this pandemic can be overcome sooner rather than later," he added.

As at March 22, India has supplied 60.4 million vaccine doses to 76 countries, including those in Asia, Africa, America and the Caribbean, through different platforms including grants in aid, gifts, commercially and through the World Health Organisation's Covax facility, the envoy noted.