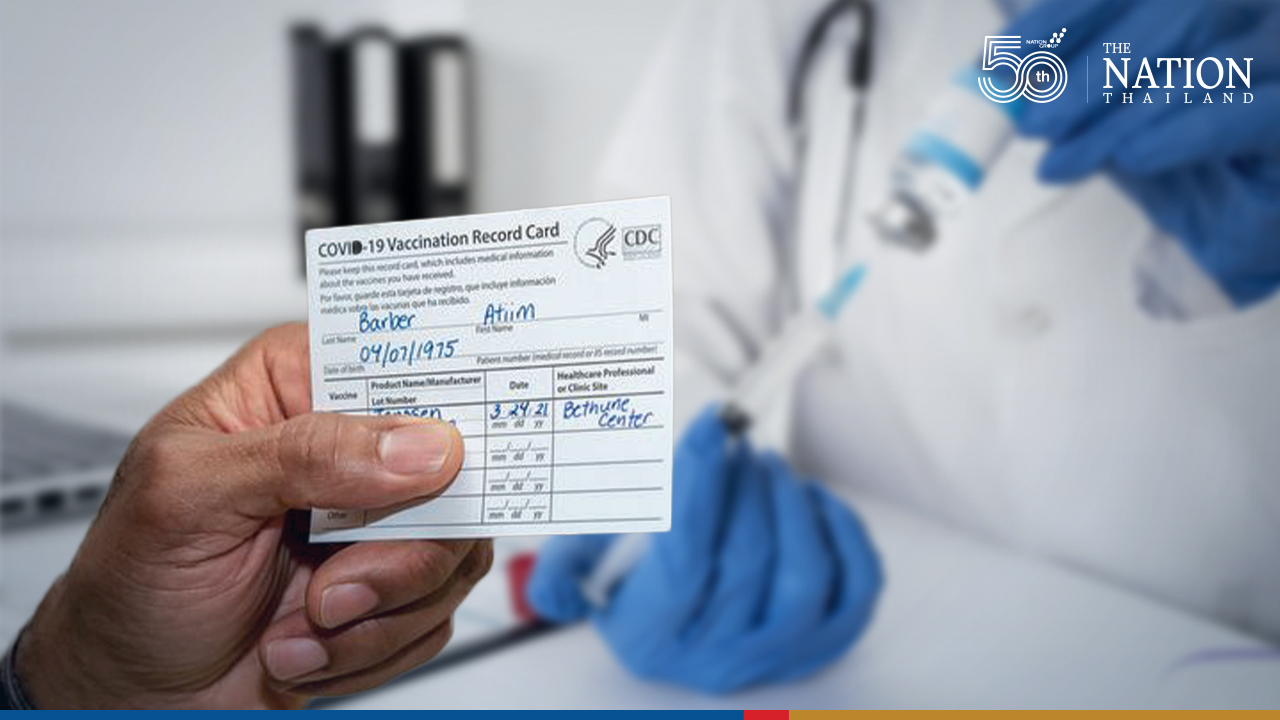 MOSCOW - It took just a few hours for fraudsters to act after Moscows mayor announced this month that coronavirus vaccinations were compulsory for most of the citys service-sector employees.

Accounts advertising the availability of fake coronavirus vaccination certificates suddenly appeared as social media followers of Russians who identified as working at restaurants or bars.

A new black market was born with a deep potential clientele: the many Russians still hesitant to be vaccinated even amid a surge in coronavirus cases.

One bartender, who provided The Washington Post a copy of his private Instagram messages, sent a query to one account about the cost of a fraudulent vaccination certificate.

The response was immediate: The price was the equivalent of about $25 and the bartender just needed to provide his personal information. The bartender spoke on the condition of anonymity to discuss engaging with an illegal operation.

The increase in the number of people selling bogus vaccination certificates comes as Moscow has ordered 60 percent of workers who interact with the public - teachers, taxi drivers, salespeople and others - to get vaccinated or get different jobs. Their employers are subject to hefty fines for noncompliance.

The new rules,which begin taking effect Monday, also require that restaurants and bars limit admission to people with a QR code confirming their vaccination or proof of a negative PCR coronavirus test within the previous three days. Moscow authorities have further warned that hospitals will deny routine medical care to the unvaccinated.

The extraordinary measures - Moscow now has among the strictest vaccine rules - flow from Russia's inability to gets its arms around the pandemic despite two homegrown vaccines, led by Sputnik V, that are widely available and free. Russia's latest coronavirus wave also shows how vaccine hesitancy threatens to prolong the pandemic worldwide.

Just 15 percent of Muscovites had been vaccinated, Mayor Sergei Sobyanin said on June 16. The vaccine rates for all of Russia is lower, 11.5 percent - below anywhere in Europe except North Macedonia, according to Our World in Data. The United States has fully vaccinated more than 45 percent of its population.

But Moscow's push to vaccinate its citizens has left many bitter.

Some people say they are more fearful of being vaccinated than they are of contracting the coronavirus. That makes buying a fake vaccination certificate an attractive option to try to beat the system.

"I've been partying since last summer, and I've been interacting with a lot of people, including those who actually had covid-19," said Anna, a 23-year-old university student who declined to provide her surname to speak candidly because she had considered buying a false vaccination certificate, then decided against it.

"I didn't get sick. I don't have antibodies. So, I just made a conclusion that maybe I'm just not prone to getting it. Why should I get the vaccine if my body works well without it?" she added."I just don't trust it that much."

Sobyanin said that about 90 percent of the new Moscow cases are the Delta variant. Infections in the city of about 12 million people have spiked to more than 8,500 per day this month, according to Russia's coronavirus headquarters, and 98 coronavirus-related deaths were reported Friday in Moscow, a single-day record for the city.

The "explosive growth," as Sobyanin put it, has led to sweeping new restrictions that will make it nearly impossible for the unvaccinated to work in most places or eat in any restaurants.

More than a dozen regions across Russia have followed Moscow's lead in imposing some mandatory vaccination standards. Resorts in Sochi, the popular summer destination on the Black Sea, will be closed to unvaccinated vacationers as of Aug. 1.

By mid-June, there were 500 newly registered domain names for selling fake vaccination certificates, according to Forbes. Certificates also are sold on the messaging app Telegram and on Dark Web forums.

Some of the accounts purporting to sell the certificates have been deleted ahead of a promised crackdown by authorities.

Moscow tried to foil counterfeiters by insisting on registering vaccination certificates for QR codes - those square bar code mazes of lines and boxes - rather than just a physical document.

But, for a higher cost on the black market, even a vaccination certificate purchased illegally can be registered online.

It works like this: The seller of the fake certificate contacts a medical professional with access to vaccine doses, according to a flight attendant who is in the process of obtaining a fake certificate. She spoke on the condition of anonymity to protect her employment.

The medic then pours out a vial of the first dose and attaches the vial's serial number to the client's name in the state system, she said. Three weeks later, the same thing happens for the second shot. The vaccine certificate is then ready and is - for all intents and purposes - real.

Russia's internet regulator, Roskomnadzor, said it shut down 150 web pages and accounts selling phony documents. The Russian Interior Ministry said the average price of a fake certificate was up to $66.

Russia was the first country to authorize a coronavirus vaccine when it approved Sputnik V for mass use last August. But although the vaccine has been purchased by more than 60 countries, 62 percent of Russians polled in April said they would not take the vaccine, according to the Levada Center, an independent polling and research institute. Meanwhile, in a May survey by Levada, 55 percent of Russians who participated said they were not afraid of contracting the coronavirus.

Russian actor Egor Beroev, speaking at a prestigious television award ceremony on Tuesday, wore a yellow star on the lapel of his jacket and compared mandatory vaccinations to Nazi identification marks for Jews during World War II.

"Today I woke up in a world where it has become an identification mark: Are you a citizen or will you live in a reservation? Will you be able to go to venues and events? Will you enjoy all your rights and benefits?" Beroev said. "I have a question: How could we, the descendants of the (World War II) winners, allow this to happen?"

A troubled public relations campaign is to blame for Russians' distrust of vaccines, said Pavel Volchkov, the head of the Genome Engineering Lab at the Moscow Institute of Physics and Technology.

He pointed to Russian state television channels highlighting extremely rare adverse reactions for some individuals abroad who received AstraZeneca and Pfizer-BioNTech vaccines. Though those vaccines are not available in Russia, the news reporting contributed to a fear of all vaccines, he said.

Most of Russia's coronavirus restrictions were lifted a year ago and the few mandates that remained were rarely enforced. That created an environment in which people lacked the incentive to get vaccinated because they thought the coronavirus had been defeated, said the researcher Sergey Kolesnikov, who studies Russia's health-care system at the Russian Academy of Sciences.

"I had a wonderful proposal to only sell vodka and tobacco to people who show you the vaccine certificate," Kolesnikov said. "That's a joke, of course. But then more than 50 percent of the population would have to get vaccinated."

"Nihilism" is to blame for the surge in infections, contended Kremlin spokesman Dmitry Peskov, who, for a time last year, wore a protective badge called a "virus blocker" - a gadget with chlorine dioxide that purports to help shield against pathogens despite no scientific evidence that it works.

President Vladimir Putin himself has never appeared publicly in a mask. One missed opportunity to boost trust in the vaccine was the secrecy around his vaccination in March. The 68-year-old Putin said he would get vaccinated, but no photos or videos of his being vaccinated were released. The Kremlin would not reveal even which of the Russian vaccines Putin received.

"There's a trigger, especially among the younger generation here, that if the government says to do something, you need to do the opposite," said Aleksey Lavrinenko, a 30-year-old Muscovite.

Lavrinenko got the Sputnik V vaccine the day after Sobyanin's mandate, waiting in an hour-long line at a vaccination center in a luxury shopping center on Red Square. Like others, he received a free ice cream cone as a post-vaccination reward.

Moscow also has tried encouraged people to get vaccinated with lotteries for a free car or an apartment.

Lavrinenko said he got the vaccine only because he feared losing his restaurant job without it. Otherwise, he said, he probably would not have taken the shot.

"It seems like the population here is split in half," he said. "There are people who are saying that, 'Yes, vaccination is needed.' And the other half is like, 'No, we'll all die from it.' There are people who just categorically don't want to do it and won't."