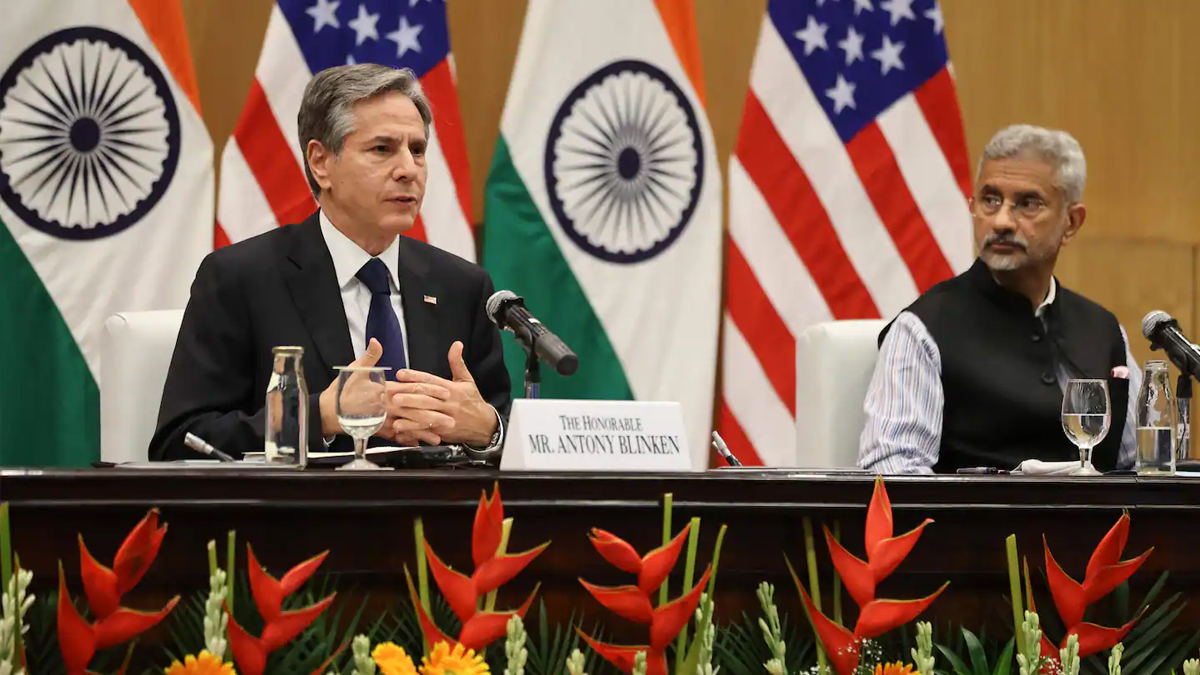 NEW DELHI - US Secretary of State Antony Blinken said ties between India and the United States would be critical for bringing prosperity to the Indo-Pacific region and that India was a top foreign policy priority against the backdrop of mutual unease over Chinas growing assertiveness.

Mr Blinken, who is on a visit to India, held talks with External Affairs Minister S. Jaishankar on boosting vaccine production, the Quadrilateral Security Forum, increasing bilateral trade and the deteriorating security situation unfolding in Afghanistan among others.

The pandemic remained on top of the agenda, with Mr Blinken pledging US$25 million (S$34 million), adding to the earlier US$200 million, to boost vaccine supply chain logistics, fight vaccine hesitancy and help train healthcare workers in India.

The two sides also discussed the vaccine initiative under the Quadrilateral Security Forum or Quad, to deliver one billion doses of coronavirus vaccine by the end of 2022 with a focus on South-East Asia. The Quad countries include the US, Japan, India and Australia.

"We focused today on expanding vaccine production to make it globally affordable and accessible," said Mr Jaishankar at a joint press conference after the talks.

The Quad vaccine initiative depends on India's pharmaceutical manufacturing prowess. But a deadly second wave of the pandemic saw India narrow the focus to its domestic vaccination programme and stop all exports. India has not revealed when it will resume exports.

Both sides also expressed their commitment to supply vaccines to the region, where China has stepped in to fill the gaps with its vaccines.

"We are determined to end this pandemic. India and the US will work together to do it, including through the Quad vaccine partnership, which will bring safe and effective vaccines to others across the region," said Mr Blinken.

India and the US have committed to working closely in the Asia-Pacific region, in what is seen as providing a counterweight to growing Chinese dominance.

Indian and Chinese troops have clashed at the border in the past year, while the US has a slew of concerns over China including its activities in the South China Sea.

China views the Quad as an effort to contain its rise.

On this, Mr Blinken noted that the grouping is not a military alliance and that it is "reinforcing international rules and values" and cooperating with other blocs such as Asean.

However, an aspect of the visit that is likely to capture Chinese attention was Mr Blinken's meeting on Wednesday with Mr Ngodup Dongchung, who serves as a representative of the Tibetan government in exile.

It follows Prime Minister Narendra Modi's publicised greetings to the Dalai Lama, Tibet's exiled spiritual and political leader, on his birthday after a gap of many years.

Strategic analyst Brahma Chellany saw it as raising stakes on the issue of sovereignty for Tibet, which China rules.

"Blinken's meeting with Dalai Lama's envoy, and Modi's publicised birthday greetings to the Tibetan leader, signal US and Indian intent to raise the profile of the Tibet issue at a time when Xi's Tibet visit showcased his aggressive policies," tweeted Mr Chellany.

Dr Rajeswari Pillai Rajagopalan at Observer Research Foundation said China remained a major factor in the growing proximity between India and the US.

"I think overall clearly despite the irritants - human rights and media freedom - from the US side, they are looking at India from a broader strategic perspective. India and the US share similar concerns on China."

Mr Modi, who met with Mr Blinken, tweeted that he welcomed US President Joe Biden's strong commitment to strengthening ties.

Still the two countries have divergences.

Last month, the US urged India to "respect the vital role of human rights activists in healthy democracies", following the death of 84-year-old tribal rights activist and Jesuit priest Stan Swamy, who contracted Covid in jail.

During his visit Mr Blinken, who met with Prime Minister Narendra Modi, National Security Advisor Ajit Doval and civil society leaders, noted that a shared commitment to democratic values is the bedrock of the bilateral relationship.

"Shared values - freedom and equality - are key and none of us have done enough. We need to strengthen our democratic institutions. This is at the core of our relationship, beyond strategic and economic ties," Mr Blinken said.