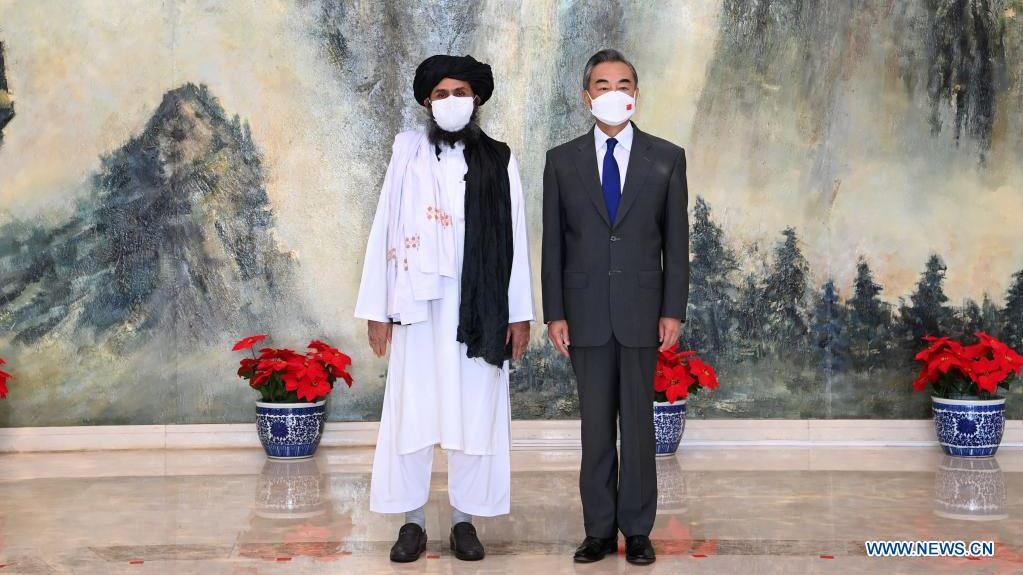 State Councilor and Foreign Minister Wang Yi said on Wednesday that the Afghan Taliban is expected to play an important role in the Afghan peace and reconciliation process as a decisive military and political force in the country and he hoped it could cut ties with the East Turkestan Islamic Movement.

The hasty withdrawal of troops by the United States and NATO, which in fact marked the failure of Washington's Afghan policy, provided a significant opportunity for the Afghan people to stabilize and develop their own country, Wang said as he met in Tianjin with a Taliban delegation led by Mullah Abdul Ghani Baradar, the political chief of the Afghan Taliban.

The meeting was the latest of a series of efforts made by China to help resume negotiations among Afghans and prevent civil war in Afghanistan in order to work out solutions for political reconciliation in the country.

As the largest neighbor of Afghanistan, China always respects the sovereignty, independence and territorial integrity of Afghanistan, always adheres to the basic principle of noninterference in the internal affairs of Afghanistan, and always pursues a friendly policy toward all Afghan people, Wang said.

China believes that Afghanistan belongs to its own people and the destiny of the country must be in the hands of its people, he added.

Wang said that China hopes that the Afghan Taliban will put the interests of the Afghan nation first, support peace talks, establish the goal of peace, create a positive image and adopt an inclusive policy.

He called on all factions and ethnic groups in Afghanistan to stay united, truly implement the "Afghan-led and Afghan-owned "principle, promote the peace and reconciliation process in Afghanistan to achieve substantive results as soon as possible and independently establish an inclusive political structure in line with Afghanistan's own national conditions.

Wang noted that the East Turkestan Islamic Movement, a terrorist organization listed by the United Nations Security Council, poses a direct threat to China's national security and territorial integrity. China hoped that the Afghan Taliban could firmly crack down on the ETIM and other terrorist groups to ensure the peace, stability and development of the region, he said.

Baradar praised the fair and positive role played by China in Afghanistan's peace and reconciliation process, saying that China has always been a reliable and good friend of the Afghan people.

The Afghan Taliban hopes that the Chinese side will increase its participation in the process and play a bigger role in the country's reconstruction and economic development, he said.

Baradar also said that the Afghan Taliban will not allow Afghanistan's territory to be used by any force to do harm to China and believes that Afghanistan should develop friendly relations with neighboring countries and the international community.