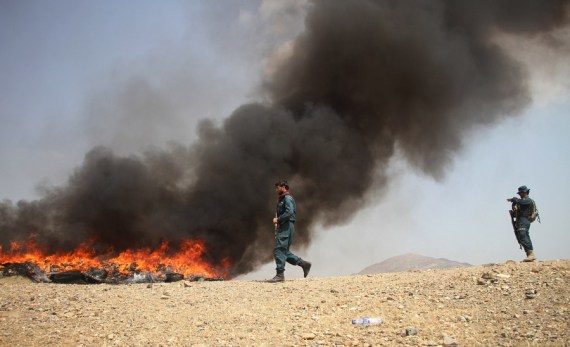 More than 13 tons of narcotic drugs including heroin, poppy opium, hashish, henbane and some amounts of chemical agents have been burned in eastern Nangarhar province.

Police in Afghanistan burned more than 13 tons of narcotic drugs in eastern Nangarhar province on Wednesday, the latest in the fight against illicit drug and narcotics trafficking, the country's Ministry of Interior said.

The drugs were seized from separate locations in Nangarhar within the past three years and was set ablaze on the outskirts of provincial capital Jalalabad city, the ministry said in a statement.

Police have also arrested 220 suspects along with 45 vehicles and 18 weapons in connection with trafficking and hiding the drugs during the cited period, according to the statement.

Much of the world's opium poppy is cultivated in the militancy-hit country.