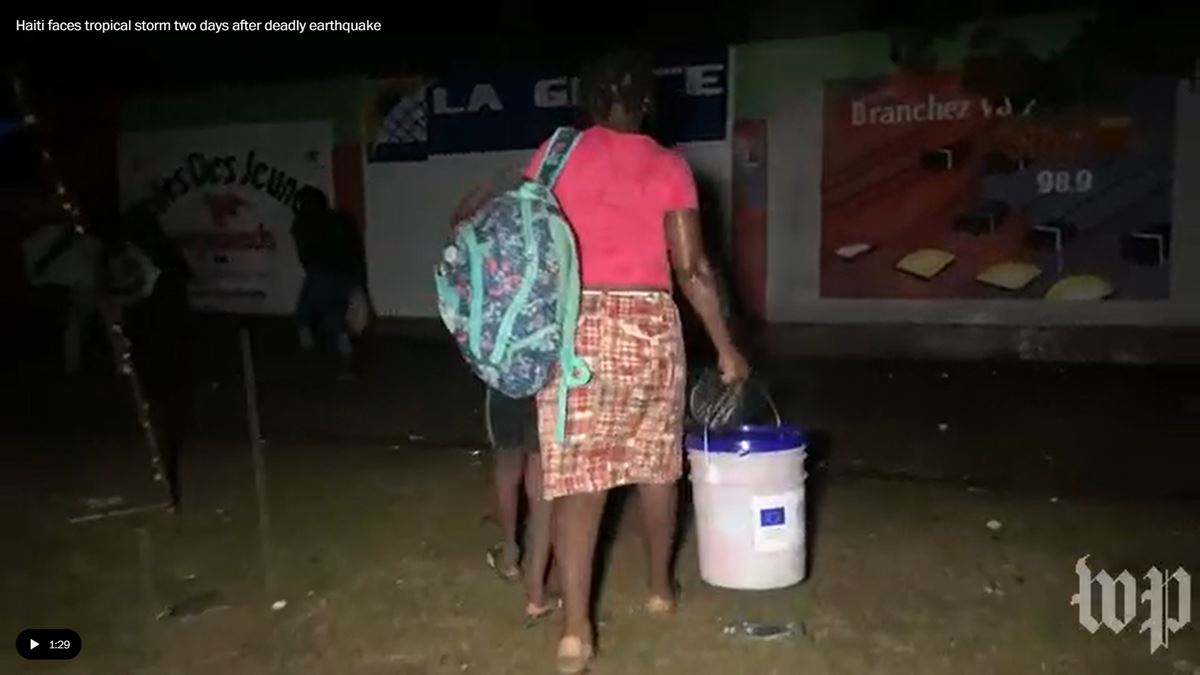 Survivors of a powerful earthquake in Haiti scrambled for shelter, food and medical supplies Wednesday as officials acknowledged that the deadly temblor had disrupted vaccination efforts, and the aftermath of Tropical Storm Grace continued to snarl already feeble relief efforts, worsening a dire humanitarian crisis and fueling anger.

Heavy rainfall Tuesday battered temporary shelters set up since the weekend, drenching people stranded by Saturday's 7.2-magnitude earthquake. Some slept out in the open. And while the sun was out Wednesday, flooding and mudslides cut off roads, blocking urgently needed aid deliveries and stalling efforts to search for those still missing or trapped beneath the rubble.

Hospitals in the Tiburon peninsula were overwhelmed, struggling to secure sufficient medical supplies, including anesthetics, or to find enough staff members to treat the badly injured. At least 24 health-care facilities were damaged, including several that were destroyed. Other hospitals, USAID said, were effectively rendered "nonfunctional" because they lacked adequate access to electricity and water.

Carissa Etienne, director of the Pan American Health Organization, told reporters at a virtual news conference Wednesday that the needs in Haiti are "immense." She said that there remained logistical challenges and that a lack of clean drinking water and sanitation increased the risk of diarrhea, respiratory illnesses and skin diseases.

"The earthquake aftermath, combined with the covid-19 pandemic, presents a very challenging situation for the people of Haiti," Etienne said.

Saturday's quake has also disrupted vaccination efforts in Haiti, where vaccine doses are limited and just 0.17 percent of people in the country of more than 11 million have received at least one dose of a coronavirus vaccine, according to Oxford University's Our World in Data.

Ciro Ugarte, director of health emergencies for the Pan American Health Organization, said that vaccination efforts had been accelerating in recent weeks. Then the earthquake hit, disrupting the vaccine rollout across the country.

"Understandably, the priority of the health personnel and health authorities is to save lives and reduce the impact of the earthquake in many areas," Ugarte said, "and also, a lot of health-care workers are overwhelmed treating trauma patients ... but also treating other diseases and trying to re-establish the health services that have been impacted by the earthquake."

Officials raised the death toll Tuesday to 1,941, though that figure was expected to rise. Nearly 10,000 people were injured, according to Haiti's civil protection agency, and more than 83,000 homes were damaged or destroyed.

Saturday's earthquake compounded woes in the Western Hemisphere's poorest nation, which was already struggling with a coronavirus outbreak and a scarce vaccine supply, gang violence that aid agencies have warned threatens to imperil relief efforts and political turmoil after the assassination of President Jovenel Moïse last month.

U.S. national security adviser Jake Sullivan told reporters Tuesday that it was "too early to tell" what impact the earthquake would have on the political disorder in the Caribbean nation. He said that there were no plans to send U.S. military personnel to the country.

UNICEF has estimated that the powerful earthquake affected about 1.2 million people, including 540,000 children, and damaged or leveled some 84,000 homes. Among those searching for survivors was a 10-year-old boy who pulled three of his aunts from the rubble, it said.

Bruno Maes, UNICEF's representative in Haiti, said in a tweet that 20 schools in one of the country's administrative regions were reduced to rubble, while 74 others were partially destroyed. He shared photos of school desks covered in debris and gaping holes in classroom walls mere weeks before the start of the school year.

"Countless Haitian families who have lost everything due to the earthquake are now living literally with their feet in the water due to the flooding," he wrote in another tweet, sharing a video of a flooded street.

UNICEF estimated that $15 million is needed to respond to the most urgent needs.

U.N. Secretary General António Guterres said Tuesday that the United Nations set aside $8 million in emergency funds for health care, water and shelter in the country, calling for countries to step up foreign aid to prevent a "humanitarian disaster."

In L'Asile, a town in the remote region of Nippes near the quake's epicenter, roughly 90 percent of homes were affected by the quake and about half were reduced to rubble, said Christy Delafield, a spokeswoman for the global aid organization Mercy Corps, who visited the area, at times driving with her team through a foot of water.

Among the challenges, she said, is that the roads leading into the area cannot support large trucks, meaning several smaller vehicles would be needed to shuttle supplies, and that buildings such as churches and schools that might have served as shelters were also damaged.

"There was one school that we visited that was only partially destroyed, where there were about 200 people sheltering there overnight," Delafield said, "and they said that more people are arriving each night."

Aid was slowly trickling into the country Wednesday, including from Puerto Rico, but some residents were frustrated by the discrepancy between what Prime Minister Ariel Henry promised over the weekend would be rapid relief efforts and the reality on the ground.

Haiti was still recovering from a devastating 7.0-magnitude earthquake in 2010 near the capital of Port-au-Prince that killed some 200,000 people when Saturday's temblor struck.

"It's just one thing after another," Delafield said. "Talk about the number of shocks and stresses that Haiti has been though. ... It's devastating and incredibly hard."