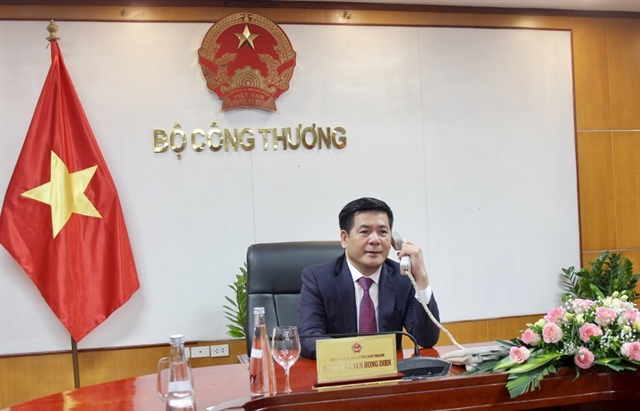 Diên, who is also Chairman of the Việt Nam-US Trade and Investment Framework Agreement (TIFA) Council, suggested the US Department of Commerce enhance discussions to recognise Việt Nam as a market economy and give objective and fair opinions in line with the World Trade Organisation (WTO)’s regulations in trade defence investigations.

The maintenance of goods supply, manufacturing activities and import-export were the top important priorities of the Vietnamese Ministry of Industry and Trade, Diên said in response to concerns over potential disruptions to supply chains in Việt Nam due to the severe ongoing fourth wave of infections.

The Vietnamese minister added that Việt Nam would step up vaccinations against COVID-19, creating favourable conditions for firms to mobilise workers back to work, ensure the flow of goods, resume business and production activities, to meeting global chains supply demands, including those of the US firms.

Diên stressed that Việt Nam was ready to increase dialogue with the US to deal with existing bilateral economic and trade issues. He also hailed the US for offering opinions to further perfect existing legal framework.

Raimondo said economy and trade remained a high priority under President Joe Biden’s policy, stressing that US enterprises want to invest in many fields in Việt Nam, with energy as a top priority.

The US would actively work with Việt Nam to ensure the continuity of the goods supply chain amid the complicated developments of the pandemic in the country, she said.

The US official also said that in March next year, she would lead a major US delegation to Việt Nam in search of trade and investment opportunities.

Diên asked Raimondo to convey his message to the US Government about giving further priority to assisting Việt Nam in COVID-19 vaccines given current shortages, accelerating the implementation of signed vaccine supply contracts, and facilitating vaccine production technology transfer.

Both sides expressed their belief that bilateral ties would maintain stable growth momentum, with economic and trade collaboration as a focus and key driving force.

Over the past five years, Việt Nam’s export to the US has surged by 230 per cent while the US’s shipment to Việt Nam has soared by over 175 per cent. The US became Việt Nam’s largest importer while Việt Nam was the 10th biggest trade partner of the US. — VNS