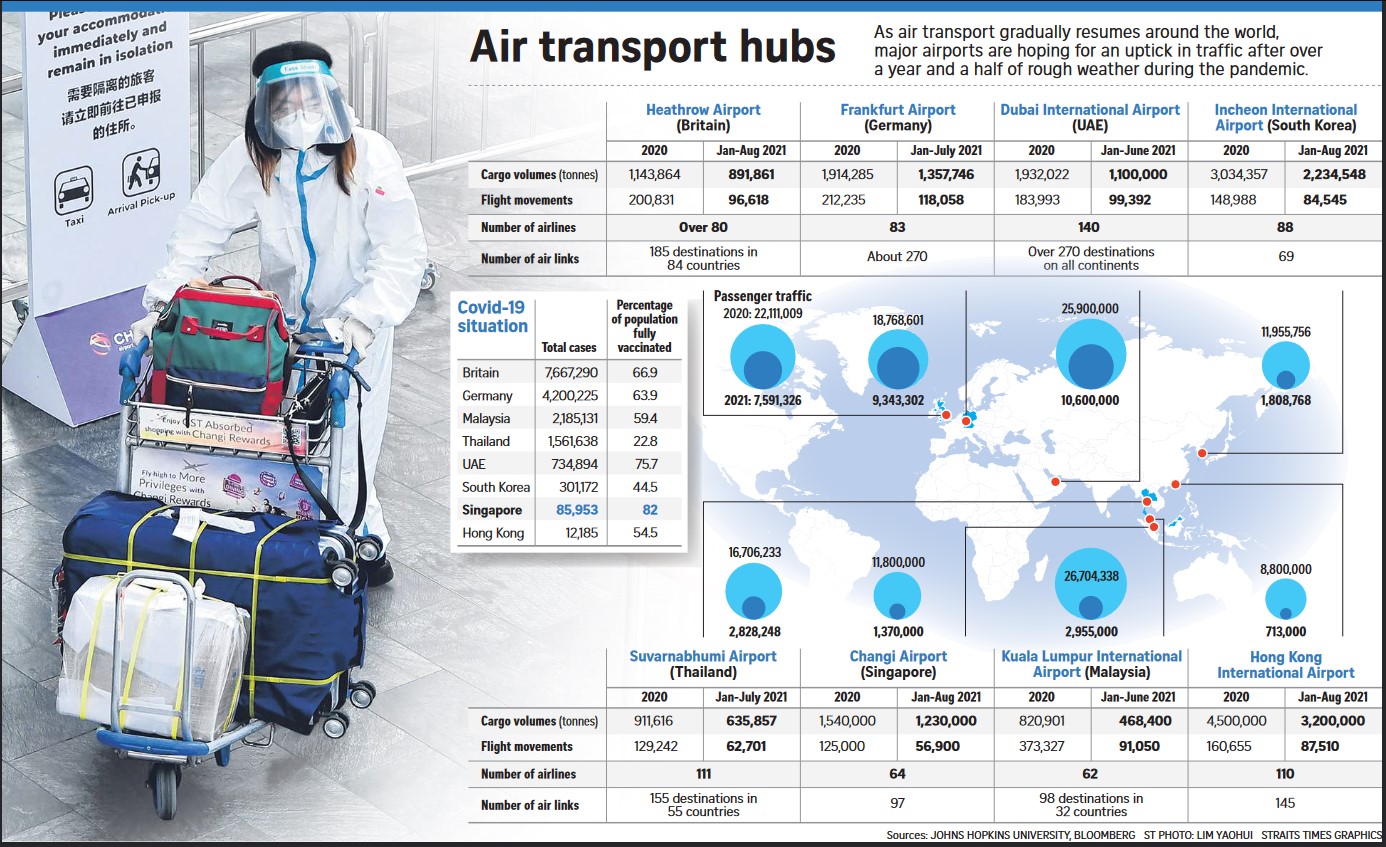 SEOUL - Things were looking up for the aviation sector in Asia in the middle of this year.

As soon as the number of Covid-19 infections started to stabilise against rising vaccination rates, South Korea announced it would seek to create travel bubbles with other countries in a bid to revive tourism.

Airlines and booking sites expected a surge in demand from vaccinated travellers, and duty-free shops prepared to reopen.

South Korean officials said the plans could be rolled out as early as July, They were just as eager to see foreign tourist arrivals bounce back to pre-pandemic levels of nearly 3 million a month - up from just 127,090 in June.

Budget carrier Jeju Air announced the resumption of flights to Saipan and Guam, both of which were popular destinations for beach vacationers.

But all hope for air travel in South Korea was dashed as quickly as it was raised as Covid-19 returned with a vengeance, with a new wave involving the more infectious Delta variant of the coronavirus. The surge in infections came amid a shortage of vaccines.

The same scenario was repeated elsewhere in Asia, with air hubs pushing back reopening plans as governments struggled to contain the virus just as things were getting better.

Reopening, many realised, was not just about reviving flights, but also accepting that there is a trade-off - restoring connectivity comes with the prospect of rising case numbers, although vaccination mitigates the risk of serious infections.

Malaysia's north-western island Langkawi welcomed its first planeload of fully vaccinated travellers on Sept 16, as 159 people from the capital Kuala Lumpur landed to begin their first vacation after months of lockdown in the country.

Similar larger plans for the whole country, however, have been delayed by a struggle with the Delta variant, which coursed through the population early this year amid a sluggish vaccination programme.

Thai Prime Minister Prayut Chan-o-cha has vowed to reopen the country by next month despite the fact that only about a quarter of the population is fully vaccinated at present.

The state-owned Airports of Thailand (AOT) has been badly hit by the pandemic, with revenue plunging by 87.7 per cent in the nine months to June 30.

Before the pandemic hit, the main Suvarnabhumi airport in Bangkok served 53.5 million international passengers in 2019. It handled a mere 527,411 in the first seven months of the year.

Mr Shukor Yusof, head of aviation consultancy Endau Analytics, told The Straits Times that Hong Kong's position as an aviation and financial hub has declined significantly over the past two years, triggered by the street protests in the territory and exacerbated by Covid-19.

"The zero-Covid stance it is pushing is not realistic, in my view. The situation is compounded by Cathay Pacific's decline as a top airline," he said.

He added that the pandemic would leave irreparable damage all over the world but more so to places reluctant to adjust and balance the risks with the reopening of the marketplace.

"The damage is ongoing and will accumulate as long as Hong Kong steadfastly stays shut," he said.

"If you look at Bangkok particularly, it's a lot of inbound traffic, so it completely hinges on the reopening of borders," he told ST.

"So if Thailand opens up the borders faster and tourists come to Thailand sooner - even though they have a lower vaccination rate than Singapore - obviously, the traffic will recover faster in Bangkok than in Singapore."

The fortunes of an air hub are also tied to its geographic location, said Mr Sobie.

He noted that the international airport in Dubai has a lot more traffic now because it is a transit hub for connections to markets that have already reopened, such as Europe, Middle East and Africa.

"Right now, Singapore is not really able to connect any two markets that are open," he said. "Neither is Bangkok or Hong Kong, because they all rely on countries that haven't reopened yet."

Dubai International Airport (DXB) is expecting robust growth in the second half of this year, after clocking 10.6 million travellers in the first half.

The latest ACI figures establish DXB as the world's busiest airport for international passengers after it retained the title for the seventh consecutive year for annual traffic in 2020. DXB currently has nearly twice the passenger traffic as the next busiest international hub in the Middle East.

Mr Paul Griffiths, the CEO of Dubai Airports, said the outlook for 2021 in terms of passenger numbers "looks very promising", with major international events such as the rescheduled Dubai Expo 2020 and Dubai Airshow 2021 lined up in the months ahead.

"In anticipation of the robust recovery of global air travel, we started the second half on a high note by reopening Terminal 1 and Concourse D - the home terminal for our 60 international carriers - after 15 months of hibernation, to accommodate the seasonal rush of travellers over the summer holidays," he added.

Mr Griffiths was also upbeat about the campaign to safely relax restrictions on global air travel.

An industry player in Hong Kong told ST the situation remains fluid, so recovery would be uneven, adding that reopening would be gradual and based on regions that carriers preferred.

South Korea's Incheon International Airport could edge ahead of the competition "if the Koreans take calculated risks", said Mr Shukor.

How fast the main airline at an air hub would be able to restore its services and capacities would determine the air hub's recovery if all regional borders reopened at the same time, Mr Sobie pointed out.

Changi Airport's recovery would be tied to the fortunes of Singapore Airlines, for example.

But he cautioned that the choice of airports do not really figure high in travellers' priorities. They are more concerned about the attractiveness of a destination.

By Chang May Choon/The Straits Times