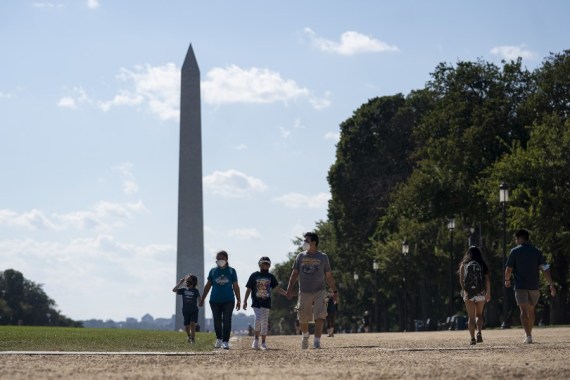 Surveys have shown that as many as half of unvaccinated workers say they will leave their jobs if theyre forced to get the COVID-19 shot, but in reality few of them actually quit, media said. "In other words, vaccine mandates are unlikely to result in a wave of resignations - but they are likely to lead to a boost in vaccination rates."

For the first time since June, the rate of new COVID-19 deaths in the United States is expected to decrease over the next four weeks, according to the latest ensemble forecast from the U.S. Centers for Disease Control and Prevention (CDC), which on Wednesday, for the third week in a row, also predicted that hospitalizations will decrease as well.

Meanwhile, according to The New York Times, the seven-day average of confirmed cases of the pandemic stood at 112,798 nationwide on Wednesday, with its 16-day change striking a 26-percent fall. The COVID-19-related deaths were 1,984 on Wednesday, the first time below 2,000 in recent weeks, with the 14-day change realizing only a 2-percent rise.

CNN on Thursday quoted Scott Gottlieb, a former U.S. Food and Drug Administration (FDA) commissioner, as estimating that the Delta-driven wave of the pandemic could run its course by Thanksgiving, and COVID-19 could eventually become more of a seasonal nuisance than a devastating pandemic. However, Anthony Fauci, director of the National Institute of Allergy and Infectious Diseases, said on Monday that is dependent on getting a lot more people vaccinated.

The CDC updated on Thursday that 214,043,376 people have received at least one dose of COVID-19 vaccine, making up 64.5 percent of the whole U.S. population; fully vaccinated people stood at 184,335,263, accounting for 55.5 percent of the total. There was a little bit scaling back for this rate -- it was listed as 55.8 percent by the agency on Wednesday.

However, partly due to lack of vaccination, northwest state Alaska's COVID-19 case count increased by 72 percent in the past two weeks, the highest in the country and topping state case and death records. The state was averaging 1,289 cases and 12 deaths per day as of Monday. The "Delta variant surge pushes Alaska's sparse health care infrastructure to the brink," reported NBC on Wednesday.

With the third-lowest number of intensive care unit beds per person in the country, the state's hospitals are activating crisis standards, the government is flying in hundreds of health care professionals from out of the state, and public health officials have little recourse as state leaders hold firm on their opposition to mask mandates or distancing restrictions, according to the report.

"Low statewide vaccination rates are making matters worse," added the report. Alaska has fully vaccinated 50 percent of its population, trailing the U.S. average of 55 percent. Alaska was an early leader in vaccinations and was the first state to open up vaccinations to anyone 16 or older, but COVID-19 rates plateaued in the early summer.

The CDC has issued a call for "urgent action" to increase coronavirus vaccinations among people who are pregnant, saying that immunization rates among that population have lagged, as COVID-19-linked deaths among pregnant people reach their highest levels yet during the pandemic.

In a health advisory released on Wednesday, the CDC said it recommends coronavirus vaccines "before or during pregnancy because the benefits of vaccination outweigh known or potential risks," adding that its advice applies to "people who are pregnant, recently pregnant ... who are trying to become pregnant now, or who might become pregnant in the future."

More than 125,000 confirmed COVID-19 cases have been recorded among pregnant people as of Monday in the United States, including more than 22,000 hospitalizations and 161 deaths, government data showed. Twenty-two of those deaths were in August, the highest monthly total in the pandemic, per the CDC.

Earlier this week in southeastern state South Carolina, a federal judge temporarily blocked the statewide ban on school mask mandates, arguing that the provision discriminates against students with disabilities.

Judge Mary Geiger Lewis for the U.S. District Court for the District of South Carolina granted a motion for a preliminary injunction against the one-year law that had been written into the state's budget and put school districts at risk of losing funding should they require students and staff to wear masks.

"No one can reasonably argue that it is an undue burden to wear a mask to accommodate a child with disabilities," Lewis wrote in her memorandum opinion, comparing the mask mandate to schools being required to add ramps "to accommodate those with mobility-related disabilities so they could access a free public education."

On Wednesday, social media giant YouTube announced the most daring decision that it will block all anti-vaccine content, moving beyond its ban on false information about COVID-19 vaccines to include material that contains misinformation about other approved vaccines.

The expanded policy will apply to "currently administered vaccines that are approved and confirmed to be safe and effective by local health authorities and the WHO (World Health Organization)," said the video-streaming platform.

The new policy will also see false claims about routine immunizations for diseases like measles, Hepatitis B and influenza removed from YouTube. That would include cases where vloggers who post content on the platform have claimed that approved vaccines do not work, or wrongly linked them to chronic health effects.

In southeastern state North Carolina, Novant Health, a large hospital network, said on Tuesday that it had fired 175 staffers for failing to get vaccinated against COVID-19.

"By doing that, by not getting vaccinated, they voluntarily resign," David H. Priest, chief for safety for Novant Health, said at a briefing.

The departures will not affect staffing at the hospital system of over 35,000 employees, Priest said, because the hospital has been using temporary staff members throughout the pandemic to make up for shortages because of staff members who have fallen ill with COVID-19.

In a statement, Novant Health also said that staff members who obtained religious or medical exemptions will be required to use additional protective equipment and submit to weekly coronavirus testing. "This continues to be a pandemic of the unvaccinated -- there are occasionally breakthrough cases, but you can still see that vaccines are holding up," added Priest.

Surveys have shown that as many as half of unvaccinated workers say they will leave their jobs if they're forced to get the COVID-19 shot, but in reality few of them actually quit, according to an article in The Conversation, a nonprofit news organization that covers academic research.

"In other words, vaccine mandates are unlikely to result in a wave of resignations - but they are likely to lead to a boost in vaccination rates," the researchers wrote in the article.

"Houston Methodist Hospital, for example, required its 25,000 workers to get a vaccine by June 7. Before the mandate, about 15 percent of its employees were unvaccinated. By mid-June, that percentage had dropped to 3 percent and hit 2 percent by late July. A total of 153 workers were fired or resigned, while another 285 were granted medical or religious exemptions and 332 were allowed to defer it," the article quoted a typical case as saying.