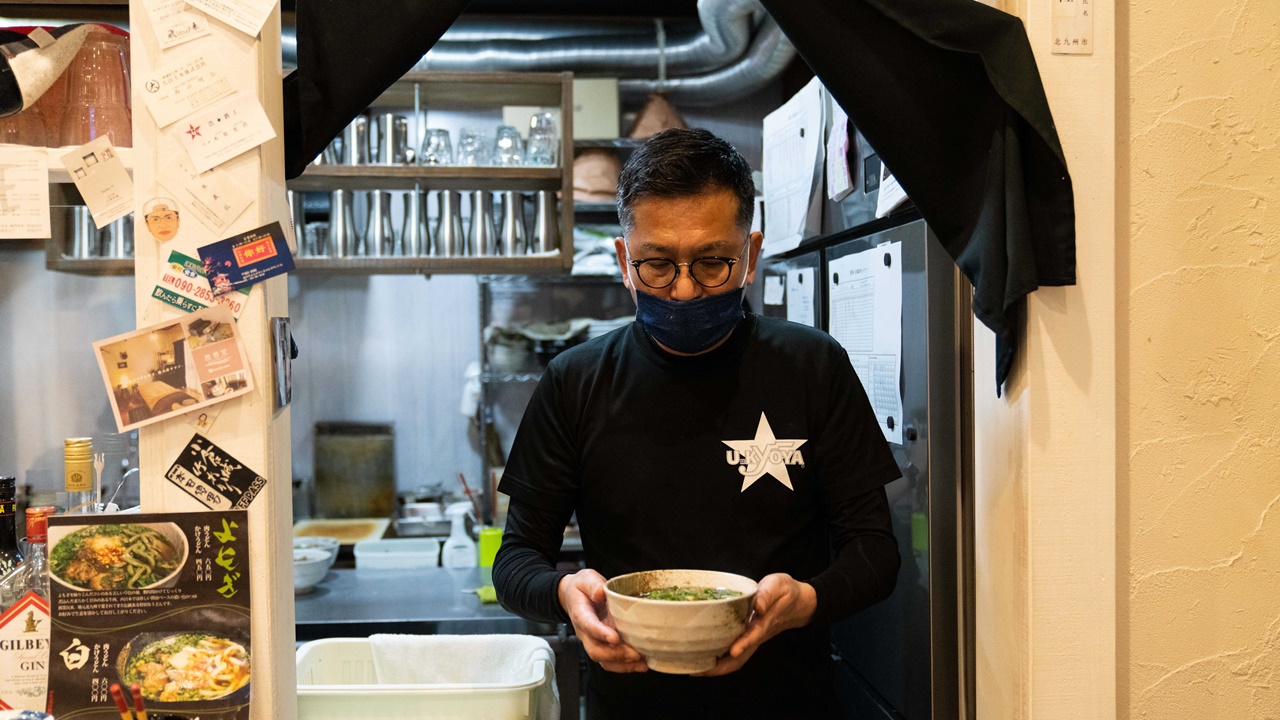 KITAKYUSHU, Japan - Noodle chef Takashi Nakamoto moves so deftly as he boils, strains and arranges his signature plates of udon that its easy to overlook the brutal reminder of his former life: his missing left pinkie.

Over three decades, Nakamoto rose through the ranks of the Kudo-kai, a violent syndicate of the once-powerful yakuza, a Japanese criminal network whose membership has been chipped away by more-aggressive law enforcement.

That effort has also led to a greater number of defectors like Nakamoto, who are trying to reinvent themselves after a life within the family-like hierarchies of the yakuza, ruled by a strict code of loyalty. Members are often conspicuous, with full-body tattoos and pinkies amputated by the mob as punishment for wrongdoing.

For years, the yakuza operated somewhat openly. It was monitored by police with the understanding that the yakuza would take care of petty crime on its turf and leave ordinary citizens alone. But now, Japanese authorities are applying more pressure as the yakuza's power begins to erode.

In 2015, while serving his last prison sentence, Nakamoto reflected on where he was going. He had lost faith in the organization and its future. It was time to leave.

"Even though I left the yakuza world, there is a lot I learned. And some of what is at the core is still the same," said Nakamoto, 55, sitting in his udon restaurant in Kitakyushu, a city in southern Japan that is home to the Kudo-kai.

"I was willing to do everything and die for my organization," he said, "and now I am just switching gears with that same mentality and putting that determination into living and working in normal society."

But finding normalcy does not come easy for former yakuza members, who face social stigma and significant legal barriers. Some government programs offer financial support as members transition from mob life, but many doors remain closed.

Yakuza membership is plummeting - the result of a decade of intensifying crackdowns targeting organized crime and the yakuza's reach into illegal activities including drug trafficking, money laundering and gambling.

There were about 70,300 known yakuza members in 2011, but that number had dropped to 25,900 by 2020, according to the National Center for Removal of Criminal Organizations. The exodus has made it feasible for longtime members like Nakamoto to leave the organization without fear of retribution for breaking the code of loyalty.

On Aug. 24, a Japanese court handed down what is believed to be the first death sentence of a yakuza boss, Kudo-kai leader Satoru Nomura, who was convicted of having a role in attacks on four civilians, including one who was murdered.

The verdict sent a wider message that times were changing for the yakuza.

After his sentencing, Nomura yelled at the judge: "You will regret this for the rest of your life." (The verdict is now under appeal. Nomura's lawyers later said the statement was not intended as a threat.)

"I think that the sentence has an impact on the yakuza world in that restrictions and regulations for yakuza as a whole will continue to become stricter," said Garyo Okita, a former yakuza member who now writes semiautobiographical books and oversees film projects about Japanese crime groups. "Now that there's a precedent of a death sentence, Kudo-kai won't be seen as some extreme case, but all yakuza will be seen as the same threat."

About a decade ago, yakuza groups had become so brazen and financially powerful that authorities across Japan enacted ordinances prohibiting any business or person from being associated with a yakuza member or activity.

The laws were designed to isolate the yakuza from society, said Noboru Hirosue, a prominent expert on criminal sociology and the yakuza.

That meant yakuza members could no longer open bank accounts, rent homes, get insurance or obtain cellphones. Okita, who left the largest syndicate, Yamaguchi-gumi, in 2014, said the crackdowns also restricted families of yakuza members and others in their social circles.

These changes led to the early retirements of elder yakuza leaders, and many underlings also stepped aside.

"The law had a huge impact on the yakuza world," Okita said.

But Hirosue, who works as a probation officer at the Justice Ministry, said the changes have led to a rise in other criminal networks outside the yakuza. These groups have now moved into new schemes, including elderly fraud, cybercrime and ways to profit off legal drugs such as sleeping pills and morphine, he said.

Motohisa Nakamizo, who left the Kudo-kai in 2011 when his boss retired, was hired at his parents' real estate company. It was his first legitimate employment after about 30 years handling Kudo-kai drug trafficking.

But such opportunities are rare.

Local regulations bar former members from activities such as opening a bank account or signing a lease for at least five years after they leave the network.

According to Hirosue's analysis of Justice Ministry employment figures for former yakuza members who register their defections with police, as few as 3% who left between 2010 and 2018 found jobs. Some who can't find jobs return to their yakuza organization, but others join new gangs, he said.

"Coming out of prison or a yakuza organization, you have to think that for the first five years you're not the same as everyone else. People often talk about starting from zero, but we are starting from minus, working toward zero," said Nakamizo, 56, sitting in his office in Hakata, a city near Kitakyushu.

Nakamizo now hires former members at his real estate company as a part of a Justice Ministry program. Yet only about 10% of them make it through the first five years. The rest usually end up returning to crime.

"I wish society as a whole wouldn't make prejudgments and [would] give these people a chance," he said. "Otherwise, it will leave them with nowhere to go, and will make them take the wrong path."

Many face an education gap that is difficult to overcome. For example, Ryuichi Komura left the Yamaguchi-gumi at age 38. His formal education ended at middle school, and he had served four prison sentences.

"I wanted to turn my life around," he said. But his chances of finding a stable job were poor. He was interested in law, but as a former yakuza member, it was next to impossible for him to become an attorney.

Instead, he decided to take the test to become a judicial scrivener, a job similar to being a paralegal that has a 3% acceptance rate. It took him eight years of study, and on his seventh try, he passed. He was 46.

Twenty years ago, Kudo-kai members rammed a car into a tea shop in Kitakyushu. It was an act of revenge against the shop owner, Toshiyuki Tsuji, who, to prevent the gang from settling in the neighborhood, had bought a building the Kudo-kai wanted.

So when Nakamoto, the udon chef, tried to open up his restaurant in Tsuji's shopping district - while he was still under the five-year ban - the cards seemed stacked against him.

But Nakamoto built individual relationships with other vendors, was honest about his time with the Kudo-kai, picked up trash from the street and volunteered for the shopping district's festivals and events.

"Nothing will change if you just wait for the five years to pass just because there are restrictions," he said. "You can't just wait for people to come to you and help you, but you need to be the one to reach out first."

Tsuji was impressed, and took a chance. As the head of the shopping district, Tsuji accepted Nakamoto's request to open his udon restaurant.

"Even if someone is ex-yakuza, if someone comes to me, I would first talk with them, looking into their eyes to see if they genuinely want to start over, and their seriousness," Tsuji said. "Everyone deserves the basic freedom to work."

On a recent weekday, a steady flow of customers ate lunch at Nakamoto's 13-seat restaurant, tucked in an alley between a hair salon and a laundromat. He still volunteers for festivals and sweeps the street without being asked.

His black long-sleeve shirt covers up his tattoos while he works. But he doesn't hide his past: A newspaper article featuring his story is framed on the wall, and in the restaurant bathroom are Japanese comic books about an ex-yakuza boss turned devoted house husband.