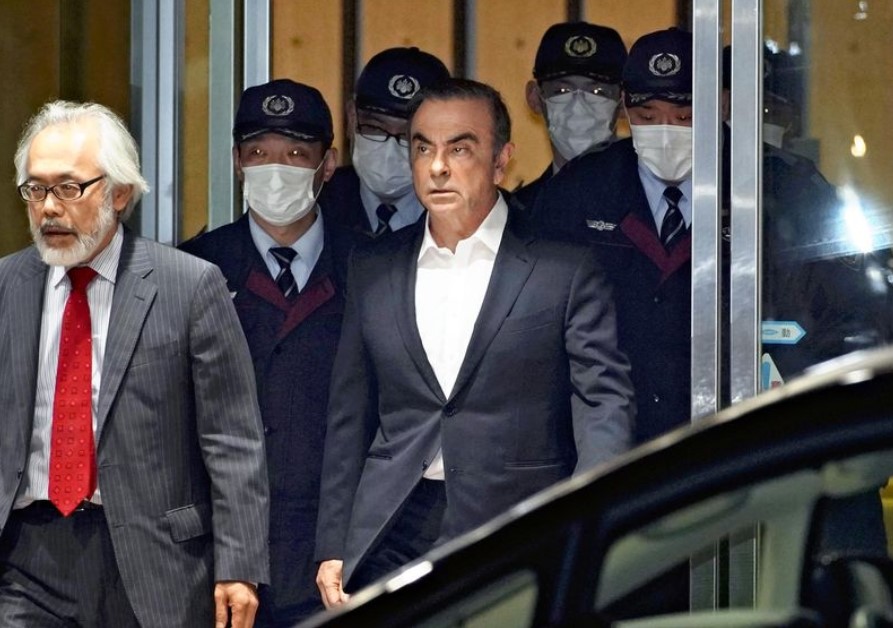 An advisory body to the justice minister has submitted a report proposing legal revisions aimed at preventing defendants released on bail from absconding through the use of global positioning system (GPS) devices, among other measures.

The Legislative Council submitted the report to Justice Minister Yoshihisa Furukawa after deciding on the revisions at a meeting Thursday.

The proposals, which would involve revisions to the Criminal Procedure Code and other laws, were prompted by incidents such as the escape of former Nissan Motor Co. Chairman Carlos Ghosn, who fled to Lebanon while awaiting trial in Japan.

The revisions would enable courts to order defendants to wear a GPS device while out on bail if it was deemed necessary to prevent them from fleeing overseas. Defendants would also be required to follow strict compliance rules, such as not entering airports, seaports and other locations, and would be prohibited from removing or damaging the device.

GPS devices can notify courts if any violation of these rules is detected. In the event of a violation, the court would then contact prosecutors and police officers, who would trace and detain the defendant.

Failure to comply with the rules would be punishable by up to one year in prison.

Judges and prosecutors will only be able to confirm a defendant’s location data when a violation has been detected. This step was taken to protect the privacy of defendants.

The system will likely apply to a limited number of defendants, with potential cases expected to include foreign nationals based overseas; wealthy people with the financial means to flee abroad; and senior members of gangs and criminal organizations.

Many other countries already widely use GPS devices for purposes including preventing defendants from absconding and sex offenders from reoffending.

The Justice Ministry considered introducing the devices in 2009 for people on parole, but the idea was shelved due to concerns about potential privacy infringements and other issues.

However, opinions have changed since Ghosn snuck out of Japan and escaped to Lebanon.

The incident exposed the fact that the nation’s judicial system grinds to a halt if a defendant flees abroad, sounding alarm bells in legal circles.

Members of the Legislative Council determined that there would be few problems with introducing GPS tags. Discussions focused mainly on the kinds of defendants that would be required to wear the devices.

The Japan Federation of Bar Associations and other entities have lambasted Japan’s bail system as “hostage justice” because suspects and defendants tend to have their detention extended if they deny the accusations laid against them.

“Introducing GPS devices that allow a defendant to be released is preferable to detaining them and taking away their freedom,” said a lawyer on the advisory body. “The system should also be available to defendants who are unable to pay a bond.”

Another lawyer said, “I think this would also be an effective way to deter people out on bail from committing other crimes.”

There are concerns that the system could become bogged down if it is initially made available to an excessively broad range of defendants.

The advisory body, which has held 14 meetings to discuss the issue since June 2020, decided GPS tags should be restricted to defendants who might flee overseas, as the need was most pressing for such individuals.

The council has decided on a legal framework for the system. How this system will actually be put into practice will now be left to relevant authorities to figure out.

Developing a GPS device that is durable and can accurately detect violations will be essential. It is also important to ensure that maintaining the device, such as recharging it, does not place an excessive burden on defendants.

Unless a system is in place in which authorities will be able to immediately act on information and rush to a scene when a violation is detected, defendants might still be able to abscond.

Courts and prosecutors will need to be able to respond around the clock. How to determine, in a short time, whether a defendant needs to be apprehended also will require consideration.

In some countries, monitoring of GPS devices is entrusted to private companies. Some observers believe setting up this system in Japan could take several years. It is also possible that the kinds of defendants subject to the system will come up for discussion again.

The council made several other proposals, including the establishment of a “supervisor system.”

Under the system, the court would appoint a defendant’s relative or employer as a supervisor and require them to pay a bond. If the defendant absconds, the bond would be forfeited.

Under the existing system, a guarantor pledges to monitor a defendant released on bail.

However, the system lacks a legal foundation and there are no obligations or punishments imposed. Consequently, this system has been criticized for being incapable of preventing bail violations, such as defendants going on the run.

Under the new proposals, attendance at appeal hearings would also be mandatory for defendants. As a result, when a prison sentence is handed down, defendants would be detained on the spot and begin their sentence immediately.

Defendants on bail who fail to show up for trial without a valid reason or who do not return to their designated residence without permission from the court would face up to two years imprisonment.

While the GPS system is designed to prevent people from fleeing the country, these other measures are mainly aimed at preventing people from going on the run in Japan.

“Fleeing would result in a heavier punishment, so these steps should reduce a defendant’s motivation to abscond,” a senior Justice Ministry official said.