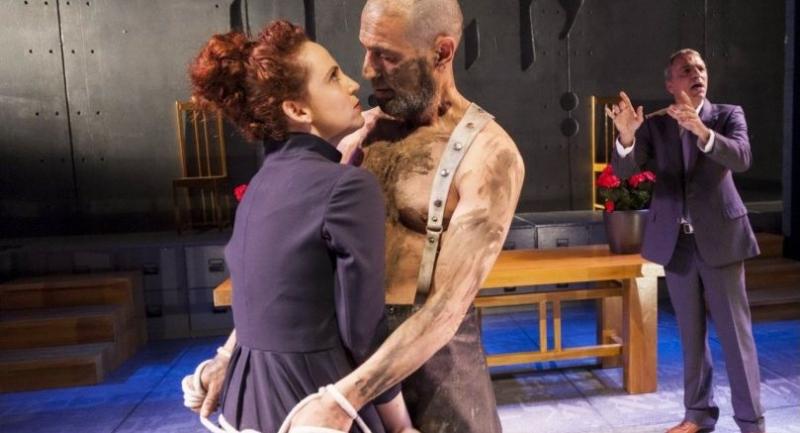 The world is never short of power-hungry leaders and

By Pawit Mahasarinand
Special to The Nation
Tel Aviv, Israel

Organised by the Henoch Levin Institute of Israeli Drama and supported by Ministry of Culture and Sport, “Isra-Drama: Spotlight on Israeli Drama” is an annual five-day programme that invites theatre managers and festival curators from all over the world to experience contemporary Israeli theatre in Tel Aviv.

Not only did we get to watch play performances, mostly in Hebrew with English surtitles and some even entirely in English, but we also attended symposiums where playwrights and directors talked with theatre scholars and critics. There was an informal gathering too, where Israeli artists, whose works might not have been picked by Isra-Drama’s artistic committee, could meet with foreign producers and managers and exchange name cards and information on what they’re working on. The world is never short of powerhungry leaders and “Jehu” is still relevant. Photo/Gerard Allon

Even in this day and age when audiences are accustomed to watching a play in a foreign language while reading surtitles, plays do not travel as far across cultures or as frequently as dance works, which have no language barrier. That said, although playwrights think of their local audiences first and foremost – for example, Shakespeare wrote his plays to earn a living and never imagined that four centuries later we’d still be watching them – some of their works hit the right chords with foreign audiences. At Isra-Drama 2016, foreign theatre producers and managers were captivated by the contemporary interpretation of biblical morality play “Jehu” by Gilad Evron at the Habima National Theatre, arrested by a familial conflict between the Jews and Palestinians in Motti Lerner’s “The Admission” at the Jaffa Theatre, which had its world premiere in Washington DC, and enthralled by a trilogy called “Nephilim” (“Giants”) on celebrities, namely a former prime minister, a judo athlete and a supermodel, at the Cameri Theatre.

Among our favourites, though – and I’m sure these will soon travel overseas – were two works which are more universal in content and form, namely Nataly Zukerman’s “Practice Makes Perfect” and Danielle Cohen Levy and Namer Golan’s “Worst Case Scenario”. The former is the physically challenged artist Zukerman’s autobiographical work. Working with a running instructor, a dancer, friends and her husband on stage, she proved that while a disability is usually connected with limitations, a disabled artist can work professionally and create works that don’t necessary call for sympathy but understanding. It was the most sincere and touching disabled theatre work I’ve ever experienced.

The latter, subtitled “23 Thoughts About Conflict”, was a result of Levy and Golan’s one-year research into daily conflicts in the Middle East, many parts of which reminded me of what happened a few years ago during our political unrest. Filled with young energy and fresh creativity, the four performers – a juggler, an acrobat/dancer, an actress/playwright and a musician who also created a new instrument exclusively for this performance – made deft use of their different performing arts backgrounds, working together cohesively as they performed 23 episodes in an entertaining variety of spoken words, physical movements, dance and songs.

This is the kind of programme our Culture and Foreign Affairs ministries should start thinking about and organising down the line.

Some of our contemporary dance and theatre companies, which have been under the radar for many years, are performing overseas, but that’s either at the direct invitation from festivals or through support from foreign embassies and cultural institutions here. Creative industry isn’t only limited to film and television, is it?

An anthology of contemporary Southeast Asian plays has recently been published and representing Thailand is a play that’s written in English and adapted from Greek mythology. Having worked professionally in theatre for almost three decades, I’ve never heard of either the play or the playwright and doubt whether it’s ever been staged. This clearly proves that we’re not really providing accurate information on contemporary Thai theatre to our foreign colleagues yet.

The writer’s trip was supported by Israel’s Ministry of Culture and Sport and Embassy of Israel, Bangkok. Special thanks to Shimrit Ron, Hemdi Kfir, Yuval Waks and Kuntheera Stityuthakarn.