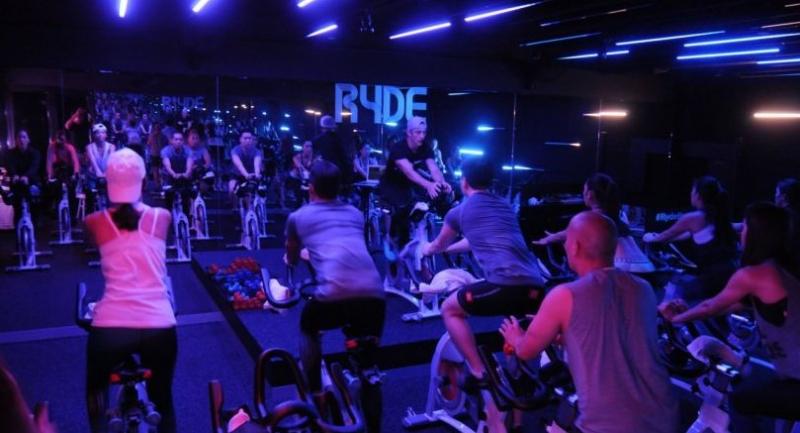 Riding to the beat

Forget the treadmill. The latest craze for workouts in the City of Angels is pedalling at speed – spinning – and boutique indoor cycling studios are popping up all over Bangkok to help fitness enthusiasts keep in shape and have fun doing so.
“I think the indoor cycling studio industry is growing in Thailand,” comments Nattanat “Ploy” Pinsang, who along with her pals Natapa “Joy” Sriyuksiri, and Pasu “Luang” Liptapanlop runs Tribe on Ploenchit Road in the heart of Bangkok’s business district.
“The indoor cycling workout has been very popular in New York and London for decades and a lot of people head to the studios after work. It arrived in Thailand much more recently but I expect it to last,” adds Nisamanee “Tong” Bhirombhakdi, who set up Ryde on Thonglor with her celebrity friends, Morakot “Aimee” Kittisara, Ase Wang, and Jutawan “Tanggua” Krairiksh.

“New fitness trends are constantly coming on the market and we need to keep our eyes on what could do well here.”
Riding indoors doesn’t have to be dull. Enthusiasts point out that it can put you on the fast track to fitness and, in any case, not many people fancy riding a bike in a downpour or in the heat of the Bangkok summer.
Indoor cycling has been around since the early 1990s and most gym chains now offer classes in this effective cardio and strength workout. Classes generally last 45 minutes and involve riding a stationary bike to music, burning up to 600 calories in the process. According to the gyms, indoor cycling can decrease body fat and body mass index, and improve overall cardiovascular function. So not only will your lungs be pumping, but you’ll also be working your gluteal muscles, calves, hamstrings, and core.

Today, most indoor cycling classes have dim ambient lighting and an eclectic playlist of sounds, usually dance music or rock set to a dance beat, aimed at setting the mood for bodymind connection. Riders synchronise their pedalling to be in time with the rhythm of the music. Instructors say this helps motivate participants to work harder than they might otherwise.
“A Singaporean friend of mine invited me to try out CruCycle, an indoor cycling studio in Singapore’s China Town. I was reluctant at first because I prefer to get my exercise riding a horse or playing basketball and volleyball. But I gave in and thoroughly enjoyed the experience. I can’t explain the emotions that ran through me at the time but concentrating on myself, on the music and the exercise was both fun and fulfilling,” says Ploy, who was working for a bank in Singapore at the time.
“After that first go, I wanted to go back and that’s when I had the idea of bringing it to Thailand, I got in touch with Joy, who had just come home after working as an architect in England, and talked her into being my partner,” she continues.

“At Tribe we are a community of social creatures who share a love for fitness, fashion and music. We change the music every hour and for every class. Each of our instructors has a different background and character as well as different taste in music. One of them, a former dancer, starts at the barre. Another, who worked as a personal trainer, starts with a bootcamp session.”
Ploy adds that she adopted the name Tribe because she felt it depicted the three partners who share a passion for fitness and music. Luang is responsible for financial management, Joy handles the creative side and the interior design while Ploy is in charge of some classes and marketing.
Tribe has more than 10 instructors on its staff including Australian Morgan Guth and Ploy herself, and is equipped with 40 exercise bikes. They’re driven by a carbon blue belt drive, not chains, and Ploy says the studio operates on the concept “Party on the Bike”.

“The feeling is similar to a party – you get an adrenaline rush from the workout and the music,” she says.
Ryde’s coowner Tong says the idea for the studio was sparked two years ago but has only just taken shape.
“We are four ambitious women who shared a passion for indoor cycling and were pleased with the workout it gave us,” says Tong, who also does Pilates and boxing.
“People tend to initially think it will be too hard and too hardcore but when they try it, they love it.”
Ryde features a Thai and international crew including Heloise Chong from Hong Kong and Guy EspleyWilkes from the Philippines and has 24 exercise bikes. Its concept is “Like as One”, which Tong describes as “pushing everybody forward towards the same emotion.
“Ryde is like a community complete with juice bar and hairdresser. We target people who stay or live in Thonglor and the surrounding area. Indoor cycling studios tend to be similar in terms of instruction and exercise bikes but the differences lie in the crew and the music – we focus on EDM and hiphop. Our classes are themed according to the music. It might be hip hop or Rihanna. We also organise customised classes,” says Tong.

Tribe is on the ground floor of President Tower on Ploenchit Road. Call (02) 656 0203 or email: [email protected] Find out more at http://tribebkk.com/