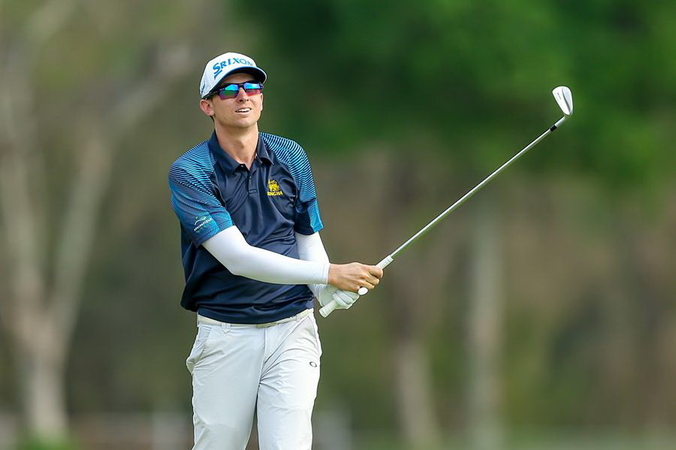 Nakhon Ratchasima - John Catlin seized a one-shot advantage at the halfway stage of the Boonchu Ruangkit Championship after the American fired a nine-under-par 62 on Friday.

Catlin, who started the day in tied fourth with a 63, overtook overnight Thai leader Suradit Yongcharoenchai for the lead after posting a blemish free scorecard that included seven birdies and an eagle for a second round total of 17-under-par 125.

Sadom Kaewkanjana of Thailand rose to third courtesy of his brilliant 61, while Thai veteran Thongchai Jaidee joined compatriot Panuphol Pittayarat after firing a 61 to sit tied-fourth along with Weerachai Yuanyang and Malcolm Kokocinski of Sweden.

“My game today was solid from the tee to the greens. I have been hitting a lot of fairways and my wedge game has been good,” said Catlin, who was one of nine golfers to fire an eagle on the par-five 14th hole.

“I have been hitting it close to the pin and a couple of par-5s. If you play your holes right you stand a good chance to land an eagle.”

Catlin, who was victorious in Thailand in November, started off brightly with a birdie, before finding another three to close out the front nine.

The world number 195 managed another three birdies after the turn, and coupled with the eagle, was enough to bump him to top spot.

Suradit, who could only manage a 66 after his impressive 60 in the first round, admitted his game was a little off.

“Everything went right for me yesterday (Thursday), but today I was just not getting enough balls in the hole. I have to work on my putting in the next two rounds. It’s all about keeping focus,” said Suradit.

A total of 50 golfers made the cut at the season opening Asian Development Tour event.

Sweden’s Oscar Zetterwall and Japanese Ryuichi Oiwa, who both won titles on the ADT circuit last year, were among some of the big names to miss the cut.