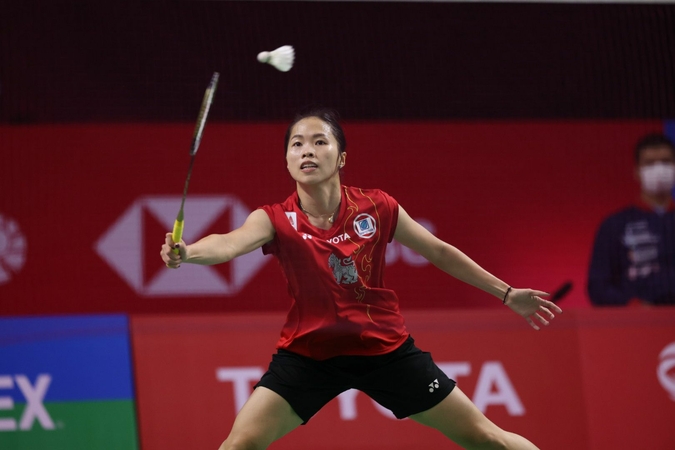 Two-time champion Ratchanok Intanon was among top seeds cruising through to the second round of the $1.5-million Thailand Open at Impact Arena, Muang Thong Thani on Wednesday.

Playing her first tournament since the All England Championships in March last year, Ratchanok showed signs of rust from the long layoff but was sharp where it mattered on key points.

Thailand’s badminton queen admitted to nerves on her return after 10 months against an unfamiliar opponent.

“I tried to study her game at the start of the match as I had no idea about her strong and weak points. I pushed myself to stay in the game and took control,” said Ratchanok.

Playing without spectators due to strict Covid-19 rules, Ratchanok urged fans to stay safe and support Thai players from home.

“You can help by staying home, while I will try hard to do my part by producing good results. My target is reaching the semi-finals, which is something I’ve never done in a 1000 World Tour level event,” she added.

“I came determined to win but also to keep focused on my game plan. Winning here is what I want,” said the 27-year-old lefthander.

In men’s singles first-round action, defending champion and world No 2 Chou Tien Chen of Taiwan shook off rust in the opening game to beat 2016 winner Tanongsak Saensomboonsuk of Thailand 16-21 21-10 21-14.

“He has a different style, so it is difficult to follow the shuttle,” said Chou. “He played really well at the net in the first game. I had to change my plan and move him and improve my attack and control to open the point up.”

Former world No 1 Saina Nehwal of India put Tuesday’s nightmare behind her to beat Selvaduray Kisova of Malaysia 21-15 21-15 and move into the second round of the Thailand Open on Wednesday.

The Indian star had withdrawn from the US$1-million tournament on Tuesday after testing positive for Covid-19 – but was then allowed to re-enter after a negative test just hours later.

“On Tuesday I arrived at the courts but was immediately taken to hospital after my third test came back positive,” said Nehwal, adding she had already contracted and recovered from Covid-19 in November.

“I tried to explain [the Covid recovery] to the doctor and, after my blood tests and chest X-rays, the doctor said I was okay and did not have Covid-19,” said the Indian star, who thanked doctors and the Badminton World Federation for allowing her to play.

“It was a tiring day, but I’m happy I could come back and play my match,” said the 30-year-old from Hyderabad.

The current world No 20 was declared clear of the virus after her blood tested positive for Covid-19 antibodies on Tuesday evening.

Her compatriot Prannoy HS, who was also allowed to re-enter the tournament after testing positive then negative, was less fortunate – beaten 13-21 21-14 21-8 by eighth-seeded Lee Zii Jia of Malaysia.