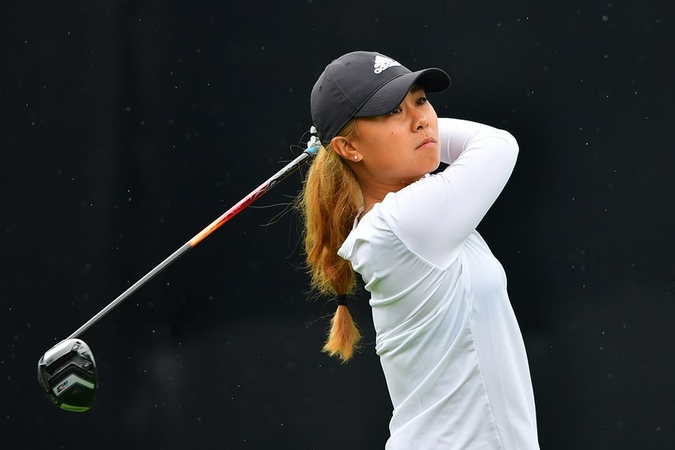 For the second consecutive year, Danielle Kang and Gaby Lopez got off to hot starts at the Diamond Resorts Tournament of Champions presented by Insurance Office of America.

Kang followed 2020’s opening-round 63 with a bogey-free 64 this year, earning a one-stroke lead over defending champion Lopez and the sister duo of Jessica Korda and Nelly Korda. Lopez was also tied for second after 18 holes in 2020.

“I think my short game was really good today. I had a lot of good feel and touch around the greens and made some good saves. I chipped in once today, which was cool,” said Kang, who ultimately finished T12 in 2020. “Even the chip on the last hole wasn't easy. Straight into the grain. Just had good feel with the wedges, and that's what I been working on a lot.”

Kang’s 64 on Thursday was just one stroke off tying her career-best mark of 63. She’s carded that number three times, most recently right here in 2020. While it was a great start, she followed it up with three rounds in the 70s to fall into a tie for 12th. In fact, her only three rounds in the 60s at the DRTOC have all come in the first round and all when she was grouped with celebrity competitors Lee Brice and Cole Swindell.

“I just feel like I'm playing with my friends back at home and I'm not stressed. That's kind of the vibe I have. I know tournament golf we always want to play well and win, and sometimes we get so caught up we forget to enjoy it,” said Kang. “Those two guys, you can't not have fun with them. At least once a year I'm guaranteed one round, hopefully.”

Lopez also started 2021 much like she started 2020, recording a bogey-free 6-under 65 at Four Seasons Golf and Sports Club Orlando. Playing in the final group with defending celebrity champion John Smoltz and 72-time LPGA Tour winner Annika Sorenstam, Lopez cruised around Tranquilo Golf Course and is in prime position to successfully defend her DRTOC title.

“We as players, we play so many golf courses. Being able to go back, come back to those courses which you like the most, the ones that the distance is probably the right one for you and the course setup,” said Lopez, who survived a seven-hole playoff in 2020 to capture the title. “So, yeah, really enjoy this golf course. The community, the people are so welcoming. This place has a special vibe.”

Starting on No. 10, Jessica Korda opened with three straight birdies and an eagle on her first four holes, making the turn at -7. She fell to -5 with bogeys at 2 and 7 but got back into a tie for second with a birdie at No. 9.

SISTERLY LOVE – AND COMPETITION – SHINES THROUGH FOR KORDA SISTERS

In the post-round interview area at the Diamond Resorts Tournament of Champions on Thursday, it was easy to do a double take. Nelly Korda was in the main Q&A tent answering questions from the assembled media while her sister Jessica Korda stood 50 feet away, recording an interview for Golf Channel. The statuesque sisters, who appeared together on the cover of Golf Digest in November, often get mistaken for each other, despite their five-year age difference, and they often like to poke fun at each other during these media sessions. But their sisterly bond always shines above any sibling rivalry.

“I always knew. I knew that if she kept her head down and worked really hard, you know, she was going to make it,” said Jessica of Nelly. “You can tell by the person. I think being around athletes our entire lives you have the feel for it. Yeah, she's a great player and she's got a very long career ahead of her.”

But even with all the sisterly love, Jessica did admit to using Nelly’s position on the leaderboard as motivation to drain her birdie putt on 18. She wasn’t going to let Little Sister beat her today.

“I saw her on the leaderboard. I was putting like towards the leaderboard on 18 or 9. I was like, Dang, I got to make this. Glad I did,” she said with a big laugh.

When Stacy Lewis won the 2020 Aberdeen Standard Investments Ladies Scottish Open, her first call was to husband Gerrod Chadwell and their daughter Chesnee back home in Texas. With a beaming smile on her face, Lewis got to tell her little girl those words every kid loves to hear – “We’re going to Disney World!”

That made this week’s Diamond Resorts Tournament of Champions at the Four Seasons Golf and Sports Club Orlando, located just 1 mile from the entrance gates to the Magic Kingdom, even more special. The Lewis/Chadwell clan can’t visit the Happiest Place on Earth until Monday due to the Tour’s COVID-19 protocols, but Lewis admitted that she might be more excited than her daughter to step foot onto Main Street U.S.A.

“She loves Mickey and Minnie. She's gotten into Frozen. I just can't wait to see it through her eyes,” said Lewis.

Lewis kicked off her tournament in style, carding a bogey-free 5-under 66 in Thursday’s opening round. This is her first time at the #DiamondLPGA since 2019, when she tied for sixth in her first event since giving birth to Chesnee in October 2018.

“I haven't been hitting a ton or practiced a ton leading into this week. Just probably about a week and a half or so. Just the stuff that I've been work on, it worked. Saw it kind of pay off today,” said Lewis, who played alongside baseball players Brian McCann and A.J. Pierzynski. “Just played really solid. Didn't do anything crazy. Just hit a ton of greens and made a few putts here and there.”