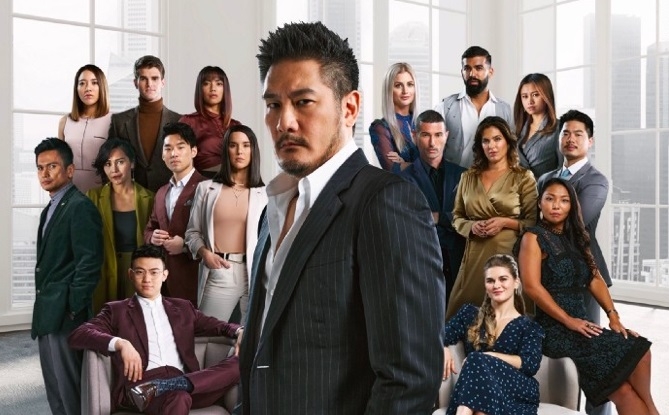 Upcoming reality series “The Apprentice: ONE Championship Edition” is all but ready to hit TV screens this March.

The ONE Championship version based on the popular non-scripted television franchise is a complete departure from the classic American version, and offers viewers an entirely new experience, according to Refinery Media founder, Karen Seah.

“The Apprentice: ONE Championship Edition” invites 16 candidates hand-picked from around the world to participate in a series of business and physical challenges, as they compete for a US $250,000 job offer to work directly for ONE Chairman and CEO Chatri Sityodtong as his protege.

Filmed entirely in Singapore, during the COVID-19 pandemic no less, “The Apprentice: ONE Championship Edition” is a production marvel.

“It was very tough, of course, and a high responsibility on our shoulders to ensure we did it right. The production was the largest in the region at the time, and we had to ensure we set a standard for safety,” said Seah.

“If we couldn’t get it right, then it wouldn’t look too good for the rest of the media industry. Naturally, there were a lot of restrictions, which made things doubly difficult and longer to execute. But we are very proud of what we have accomplished, and we did it very well. This gives me a lot of optimism for future productions in Singapore.”

ONE Championship and Refinery Media worked extensively with the Singapore government, particularly the Singapore Tourism Board (STB), in putting together a series of health and medical protocols to keep the cast, crew, and guests all relatively safe from exposure to COVID-19 as they filmed across iconic locations around the country.

Guests on the show include high-profile CEOs such as Zoom’s Eric Yuan, Grab’s Anthony Tan, and Catcha Group’s Patrick Grove, among others, as well as martial arts legends such as Georges St-Pierre and Renzo Gracie.

According to Seah, the logistics involved in having to bring all these high-profile figures from all around the world to Singapore, in addition to the show’s 16 candidates who represent 11 nations, was incredibly complex but effective.

“All of us had to wear masks and other PPE, especially the camera and sound team under extremely hot temperatures, and sometimes running with the contestants. Rules like this applied to us, but not to a regular person who went for a jog or did some exercise. It seemed extremely difficult, but we needed to put aside our discomfort to ensure the show was produced,” said Seah.

“Despite the adversities, there were always spots of opportunity for those who could see the potential in what we were doing, and were willing to take the risks and make sacrifices. I didn’t care how difficult and daunting the entire production looked like it was going to be, I just wanted to make sure that we were going to surpass all expectations creatively and visually.”

Tremendous hype has surrounded “The Apprentice: ONE Championship Edition” since it was announced in early 2020. When Seah’s team at Refinery Media worked with ONE to storyboard the initial concept of the show, she knew almost immediately she had a potential hit in her hands.

The martial arts promotion is touting this version of the show as the toughest “Apprentice” in history, and Seah is confident ONE and Refinery Media have put together a compelling product that will entertain a wide audience.

“The ONE Championship DNA of sports already gave us an incredible angle to push out an entirely different format than the ‘old’ Apprentice we know of. Combined with Chatri [Sityodtong] being a natural television host and anchor on the show, I knew I could really push the boundaries and do something really exciting and different. I was very confident it was going to be a winning formula,” said Seah.

“I don’t even think anyone will recognize it. It’s vastly different from the original in every sense.”

“The Apprentice” is one of the biggest non-scripted reality television programs in history, judging the business skills of candidates who are competing for a job offer under a high-profile CEO. It has aired in more than 120 countries.

The first season of “The Apprentice: ONE Championship Edition” consists of 13 episodes. It’s scheduled to premiere across Asia on Thursday, 18 March, on AXN, the show’s official Asian broadcast partner, followed by a global launch in June across broadcast and streaming platforms.

Seah invites fans of both “The Apprentice” and ONE Championship to tune in to the show once it finally airs next month.

“I think they will appreciate how global, modern, and edgy the show is, and how the characters are incredibly strong, from various backgrounds, and are exciting to watch. They would also be awed by the quality of filming,” said Seah.

“I think that the show will keep everyone sitting on the edge of their seats with the dramatic twists and turns, and at times, they will be wondering if they are indeed watching a reality series, or a drama series.”

Refinery Media is ONE Championship’s official production partner for “The Apprentice: ONE Championship Edition.” The company has vast experience in delivering audiences top quality reality and non-scripted programming, including Amazing Race Asia, Asia’s Next Top Model, SupermodelMe, Cesar’s Recruit Asia, and many other shows.

Seah believes producing “The Apprentice: ONE Championship Edition” in Singapore has had a positive impact on the country's economy, creating a bevvy of jobs for locals, especially in the freelance ecosphere.

“I believe this is just the beginning. ‘The Apprentice: ONE Championship Edition’ has proven that it’s possible to put on a production of this caliber even in times of a global pandemic. Producers should consider taking advantage of how well Singapore has managed the COVID-19 situation,” said Seah.

“There will be more demand for content and they should pivot and find ways to produce good quality content. There is also more demand for Asian faces on the global screens as well. More producers should be creating for global audiences. I’m proud to say that this project has created many jobs for Singapore freelancers.”