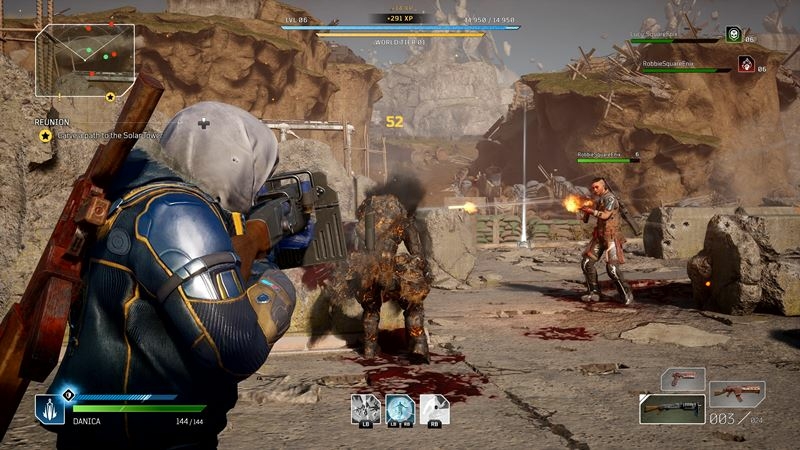 'Outriders' is a game too tasty, and too expensive, to stay online only

"Outriders" is probably the most delicious looter game at launch to date.

There's a potato chip-like crunchiness to the audio design, from the click-clacking of your gun reloads to your boots sloshing through the mud. Gunfire crackles like popcorn, and enemies explode in a fizzy blue mist, leaving the arena stickier than the floor next to the McDonald's soda machines. Maybe I should eat before long sessions of "Outriders," but why eat when this game offers so much tasty brain candy?

It's not all empty calories either. Far from it, this is probably the most smartly designed looter game at launch because it keeps it simple. It apes combat and movement mechanics from "Gears of War," while cribbing the progression and game flow of the "Diablo" games. Basically, you move like a big beefy soldier, and throw yourself into hordes of enemies as your attacks heal you so you can keep attacking.

It's too bad, then, that People Can Fly and Square Enix insisted that "Outriders" be an online-only game, despite being a complete product from beginning to end with a rewarding and complex loot system, a full story and a variety of enemies and levels. The developers have stated that in these ways, "Outriders" isn't a live service game. And yet, after its launch last Thursday, the game was plagued with server problems so bad, the entire service had to be taken down for hours on Friday just to roll people back online.

So yes, this is yet another article asking why this game needs to be online only. It's an important question, and we need to keep asking it, especially in light of recent discussion around Sony's decision to discontinue its stores for its older PlayStation platforms.

I've been playing by myself for most of my run, because like most people, I've had trouble matchmaking with anyone, even when I removed the cross play option. (The developer advised to turn that feature off for now.) But this only speaks to the precariousness of the game's online-only nature, especially when the game can be enjoyed completely and totally by yourself.

Franchises like "Destiny" seem to exist just fine in an online-only universe. But here's the rub: "Destiny 2" is now a free-to-play game, so there's no cover charge for mere "access to software." A game like "Fortnite" can be online only because it's free, and it's a true live service with daily updates. It lives and dies by these updates, so always being connected makes sense. A game like "Fall Guys" make sense for connectivity since it's primarily a multiplayer game, and it's also half the price of a standard AAA title.

As it stands, when you pay for "Outriders," you are only paying for a license to access software. That's too bad, because even though I'm not quite done with its campaign, I can already tell that "Outriders" is a beefy experience worth owning outright. This isn't an argument to make the game free-to-play; the studio has mostly delivered on the promise of a complete AAA package.

Square Enix and People Can Fly have worked hard to stabilize the game, and the developer has said it plans to explain in detail what happened last week. I hope that the studio also offers a clear explanation of why the game needs to always be online. If they're collecting data, consumers have a right to know what's being collected from our activities.

Despite all the issues, "Outriders" has enjoyed a surprisingly healthy playerbase with more than 100,000 concurrents on Steam at most times. The selling point definitely hasn't been the game's sense of style. It's easy to dismiss "Outriders" as another generic, third-person cover shooter; nothing about its presentation will convince you otherwise. It's completely derivative.

But People Can Fly keeps its ambitions grounded, and the gameplay runs as smooth as butter. (Again with the food metaphors; it can't be helped. Every piece of this game goes down like a tasty morsel.) The prominence of chest-high wall covers belies the game's real ambition as a true successor to "Diablo." Unlike other looter games, "Outriders" has an expressed focus on dealing damage by using your abilities to heal yourself. Each player chooses three abilities among several to use with freely - save for some cool-downs.

"Outriders" clicks when it pairs this with some stunning level and audio design that give the impression of huge battlefields, even if you're being funneled down corridors. Dozens of enemies can be firing upon me, moving to my left and right to ensure that I never stay in cover for more than a few seconds. But as the Trickster class, I'm able to target an enemy in an encampment, teleport behind him and punch the back of their head so it explodes in a bloody mess.

Immediately after the punch, I activate a force field that slows time all around me, stopping all incoming bullets like I'm Neo. I swipe toward a huge group of soldiers with a telekinetic knife from my hands, aging them with my time-warping abilities so quickly they turn into skeletons. Meanwhile, the brains of the guy I punched a few seconds ago are only beginning to settle on the ground as my slow-motion force field wanes. What a dynamic and beautiful experience, all packed into 15 seconds or less.

Each class comes with multiple skill trees, all of which can be reassigned at any time. It's paired with a generous modding system that meaningfully boosts your abilities, enhancing your playstyle in power and sometimes even visual panache. These mods can later be reassigned to more powerful gear. The other classes offer less stylish methods of play, like Devastator which can predictably tank more damage and hit harder, or Technomancer, which becomes a powerful, long-distance soldier in later levels.

Looter games always struggle when it comes to story, and "Outriders" might appear to be a mixed bag. It has a strong, clear premise: Earth is destroyed, so humans run off to another faraway planet called Enoch, only to find that it's ravaged by a reality-bending storm called the Anomaly. This Anomaly creates superpowered beings such as yourself, while also destroying the precious few resources rescued from Earth. This sparks - of course - a civil war on another planet. After 30 years, you are tasked with finding the source of a mysterious radio signal that was received when the humans first reach Enoch.

The tale unfolds like a buddy road trip across an alien world, complete with quirky memorable characters with distinctive personality traits like "young" and "old." With inexplicable character motivations and sudden fades to black, the story presentation and writing can feel a bit like James Cameron's "Avatar" adapted by Tommy Wiseau. Characters say non sequitur lines to each other, and we're supposed to pretend it all makes sense.

It almost does. The game's environmental storytelling does most of the heavy lifting. You'll be taken on a kaleidoscopic journey through wide-open arenas, castles and mud huts. Unlike Square Enix's other looter attempt in "Avengers," "Outriders" comes packed at launch with more than a dozen beautiful and different levels to stomp through. Even if the story left me dumbfounded in its writing, I never shook the feeling that I was actually on a journey with a clear goal in mind. That's something most loot games, even the venerated "Diablo," have missed.

People Can Fly made something special here.