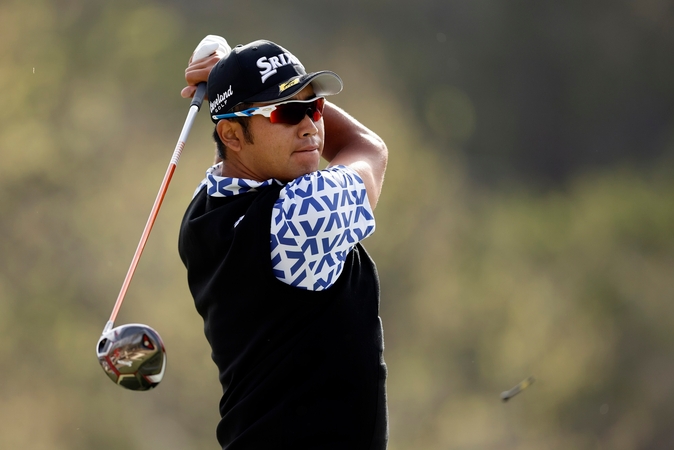 Hideki Matsuyama created Masters Tournament history on Sunday after overcoming intense pressure and the weight of a nation to become the first Japanese male golfer to triumph at Augusta National and put on the famous green jacket.

Leading by four overnight, a one-over 73 in the final round was enough to earn Matsuyama a nervy but momentous one-stroke victory with his 10-under 278 total over American debutant Will Zalatoris (70) as he became only the second Asian male golfer to win a major following Y.E. Yang’s triumph at the 2009 PGA Championship.

Jordan Spieth, the 2015 Masters winner, and Xander Schauffele, playing in the final group with Matsuyama, finished three back in a share of third place after rounds of 70 and 72 respectively.

Matsuyama’s ascendency marks a full circle in his stellar career as it was at Augusta National 10 years ago that he first announced his arrival on the global stage by emerging as the low amateur. Then, he watched up close Phil Mickelson slipping the green jacket on Charl Schwartzel, and he was soon beaming with pride after last year’s champion, Dustin Johnson did the honours for him in Butler Cabin.

The long-awaited victory, which was Matsuyama’s sixth PGA TOUR title and his first since August 2017, was written in the stars as seven days ago, 17-year-old compatriot Tsubasa Kajitani won the Augusta National Women’s Amateur. Matsuyama had previously finished fifth and tied seventh at the Masters in 2015 and 2016 respectively while his best major outing was a joint runner-up result in the 2017 U.S. Open.

“I’m really happy,” Matsuyama said through his long-time interpreter Bob Turner. “My nerves really didn't start on the second nine. It was right from the start today and right to the very last putt. Hopefully I'll be a pioneer in this (winning the Masters) and many other Japanese will follow. I'm glad to be able to open the floodgates hopefully, and many more will follow me.”

An opening bogey against Zalatoris’ fast start which featured birdies in the first two holes quickly saw Matsuyama’s lead dwindle down to one stroke early on. However the Japanese star bounced back with birdies on Hole Nos. 2, 8 and 9 to make the turn with what looked like a comfortable five-shot lead.

But as they say at Augusta National, the Masters often begins on the back nine on Sunday afternoon and Matsuyama soon felt the full brunt of trying to chase down his maiden major title. He dropped four bogeys, including three over his closing four holes, but eventually prevailed after safely two-putting from six feet for a closing bogey. Once the magnitude of his major breakthrough had sunk in, he raised his hands in jubilation and shed tears of joy while walking back to the clubhouse.

“My plan this morning was to wake up about 9:30. But needless to say, I arose much earlier than that and couldn't go back to sleep. So I came to the golf course early. Had a really good warm-up. I felt really good going to the first tee, until I stood on the first tee, and then it hit me that I'm in the last group of the Masters Tournament and I'm the leader by four strokes. And then I was really nervous,” said Matsuyama, who became the eighth champion to close with an over-par round.

“But I caught myself, and the plan was just go out and do my best for 18 holes. And so that was my thought throughout day, just keep doing my best. It's been a struggle recently. This year, no top-10s, haven't even contended. So I came to Augusta with little or no expectations. But as the week progressed, as I practiced, especially on Wednesday, I felt something again. I found something in my swing. And when that happens, the confidence returns. And so I started the tournament with a lot of confidence.”

He is looking forward to returning to his golf-crazed home country soon to celebrate with his family and friends. “I can't imagine what it's going to be like, but what a thrill and honour it will be for me to take the green jacket back to Japan. I'm really looking forward to it,” said Matsuyama, whose victory took him up to seventh place on the latest FedExCup standings.

“I hope it will affect golf in Japan in a good way. Not only those who are golfers already, but hopefully the youngsters who are playing golf or thinking about playing golf, I hope they will see this victory and think it's cool and try to follow in my footsteps. Until now, we haven't had a major champion in Japan, and maybe a lot of golfers or younger golfers, too, thought, well, maybe that's an impossibility. But with me doing it, hopefully that will set an example for them that it is possible and that, if they set their mind to it, they can do it, too.”

When asked if his Masters breakthrough will finally set him apart from other Japanese greats who include the likes of Isao Aoki, Jumbo Ozaki, Tommy Nakajima, Shigeki Maruyama and Shingo Katayama, Matsuyama, in typical fashion replied: “You know, I can't say I'm the greatest. However, I'm the first to win a major, and if that's the bar, then I've set it.”

Korea’s Si Woo Kim closed with a final round 72 to finish T12 on 286 to earn a return trip next year’s Masters.