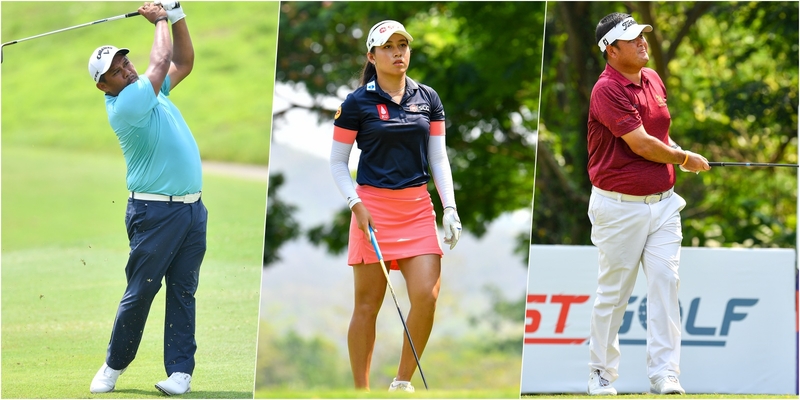 Two-time Asian Tour winner Prom Meesawat ended with an eagle to card 66 for a share of the clubhouse lead with wonder-girl Atthaya Thitikul and Chapchai Nirat as rain suspended round two of the Bt3-million Thailand Mixed II presented by Golf Trust on Friday.

Dubbed the “Big Dolphin”, the 32-year-old sank four birdies before landing an eagle on the ninth hole to take the joint lead on 134 (10-under) at the Alpine Golf Resort in Lamphun province.

“You have to be content after shooting 10-under after two rounds on a tough course like this,” said Prom, whose career highlights include wins in the 2006 SK Telecom Open and 2014 Yeander Tournament Players Championship.

“There are a lot of slopes which makes it difficult to make some putts. I had to stick to my game plan by aiming for good positions on the greens, which are quite narrow. You have to hit to the right spots to make birdies,” said Prom, whose last victory came in the Singha Pattaya Open last August.

Atthaya, the only woman among five leaders after round 1, fought back from a bogey on hole 11 and a double bogey on 13 to shoot 68 for a share of the clubhouse lead.

“I wasn’t too happy with my wedge and iron but luckily I still managed to shoot scores at the turn,” said Atthaya, who is attempting to become the second female winner in the mixed event after Arpichaya Yubol triumphed in Hua Hin two months ago.

“First things first: for the weekend rounds, I need to fix my wedge shots. Better accuracy with my wedge should result in a lot of birdies,” added the rising Thai star, who has won four of her last six tournaments.

Chapchai started on the back nine, where he swapped three birdies with three bogeys before landing four more birdies after the turn.

“I was hitting better than in the first round even though I’m still a bit unhappy with my iron,” said the burly veteran, who has just opened a golf academy back home in Phitsanulok.

“But my putts really helped me this week. The course is quite long which suits my style. I’m playing with a carefree mindset and I’m quick to move on after any mistakes,” added the 37-year-old, who is seeking his first win since the 2016 Thongchai Jaidee Foundation in Hua Hin.

Two shots off the pace was Settee Prakongvech, who finished third in the Thailand Mixed I. Settee carded 65 for the day’s lowest round. He shares fourth place on 8-under 136 with Nopparat Panichphol, who hit a second consecutive 66.