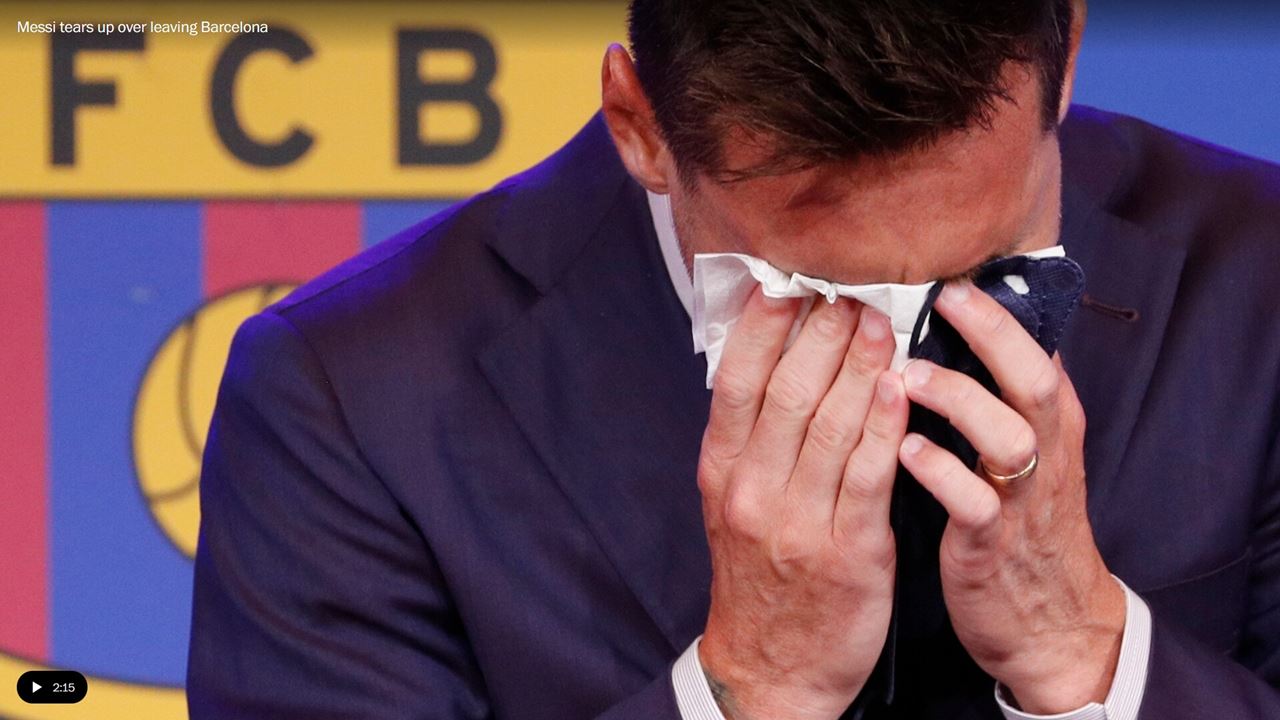 Where he will play next is not yet official, but Lionel Messi put the only team he has played for behind him Sunday, saying goodbye to Barcelona in a tearful news conference in Camp Nou stadium.

"My family and I were convinced we were going to stay here, at home," the five-time winner of the Ballon d'Or said (via the BBC). "This is the end with this club and now a new story will begin. ...Yes, it's one of the most difficult moments for me. I don't want to leave this club - it's a club I love and this is a moment I didn't expect.

The moment had been looming since June 30, when Messi became a free agent, and fans lined the streets outside Camp Nou, with first-team members joining him for the news conference. ESPN reported Sunday, citing unnamed sources, that he has a two-year agreement to join Paris Saint-Germain. A recent photo of Messi with PSG's Neymar, a former teammate with Barcelona, and others in Ibiza fueled that speculation. On Sunday, he called a PSG move "a possibility, but added, "I have not agreed anything with anyone. I have got different clubs interested. Nothing is definitive but clearly we are talking to them."

Messi noted that he arrived in Barcelona 21 years ago, coming to Spain from his native Argentina when he was 13 and making his first-team debut as a 17-year-old in October 2004. He scored 672 goals in 778 games as Barcelona won 34 trophies.

"I arrived when I was very young, 13 years old, and after 21 years I am leaving with my wife and three Catalan-Argentine children," he said. "I cannot be more proud of everything I did and lived in this city. I have no doubt that, after a few years away, we will return because it is our home."

He insisted that he had done all he could to stay, agreeing to a five-year deal that was half of his $170 million annual contract and was contingent on the departure of other players so that the team could comply with La Liga's limit. But it all fell apart and Barcelona President Joan Laporta said Friday that trying to keep Messi was a "risky" investment that would have hurt the club for 50 years.

"I offered to reduce my salary by 50 percent and they didn't ask me for anything else," Messi said. "It is not true that they asked me for anything more. I only know that it was not possible because of La Liga, because the club did not want to go into more debt."

ESPN reported that Messi would arrive in Paris for a physical later Sunday.