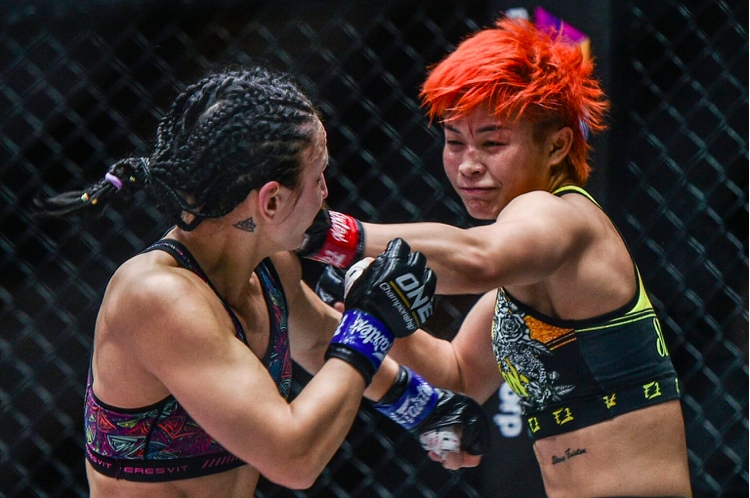 Former two-sport ONE World Champion Stamp Fairtex is a woman on a mission. The 23-year-old Pattaya, Thailand native has long aspired to win her third ONE World Title in as many sports, by capturing a belt in mixed martial arts competition.

This Friday night, Stamp can move one step closer to achieving that lofty goal.

Stamp, who is ranked #4 at atomweight, is one of eight women who are set to participate in the highly anticipated ONE Women’s Atomweight World Grand Prix. She faces Ukrainian rival, #3-ranked atomweight contender Alyona Rassohyna in the quarterfinal round at ONE: EMPOWER on September 3, live from the Singapore Indoor Stadium.

Stamp and Rassohyna battled to a controversial finish last February, with the latter forcing a late-game submission victory, albeit controversially. Stamp appeared to have tapped to a guillotine choke with less than 10 seconds remaining in the third round.

The Thai warrior immediately protested the stoppage as soon as she broke free from the hold. Despite the loss, Stamp acknowledges just how difficult of a challenge Rassohyna poses to her ambitions.

“It will be a tougher fight for me this time around, for sure. I know her now, and she knows me. She’ll make some adjustments and so will I. However, I think her cardio isn’t too good, so I’ll try to knock her out as fast as I can,” said Stamp.

“I know what I can do in the Circle, and I’m planning to go back to my strengths, which is going back to my striking rather than my ground game. She’s a great grappler. I’ve improved a lot with my takedown and submission defense, because we don't know how this fight will go.”

Stamp has done quite well so far in her time in the Circle. The former atomweight kickboxing and Muay Thai queen has five wins so far in MMA, with only one defeat. Four of those five victories have ended inside the distance.

Against Rassohyna, Stamp admits she needs to be cautious of her opponent’s high level ground game so as not to make the same mistake in the first fight. Instead, Stamp plans to return to her roots and use her strengths to her advantage.

“The armbar is still her biggest threat, but I believe she’s coming into this fight more improved all around. I can’t underestimate her,” Stamp said.

“There’s no doubt the ground game will be the most difficult aspect of this fight. But I’ll focus on striking because this is my strength, especially my elbow and knee strikes. Whether I win this fight by decision or by knockout, I have to win. I’m determined to.”

ONE: EMPOWER is ONE Championship’s historic, all-female fight card featuring only women -- the first for a major global martial arts organization.