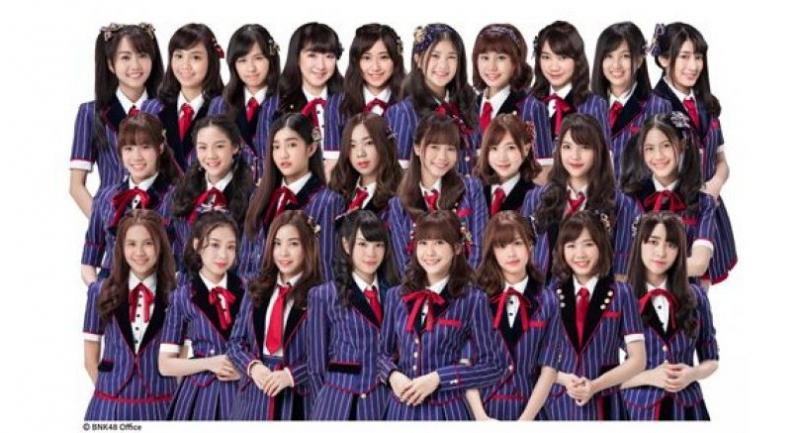 Cuteness by the numbers

Manufactured stars and starlets – idols as they are known – have been around since pop culture started, with Japan leading the way in turning young and cute adolescents into idol groups – think Morning Musume and AKB48.
Now Thailand has got into the act, shaping teens into singers and marketing them as role models for their peers. And the youngsters are loving it, turning out en masse for their shows and public appearances and hanging on to their every word.
“It really came into the spotlight here a couple of years ago when the Japanese government started pushing Japanese content in Asia in an attempt to reclaim the throne from South Korea, which had captured the Thai market through TV series and K-pop for more than a decade,” says Wim Manopimok, chief executive of Yoshimoto Entertainment Thailand, a joint venture with Yoshimoto Kogyo, one of Japan’s biggest entertainment conglomerates.

“Being an idol in former times meant being untouchable or unreachable and only being seen TV and in magazines. But after the launch of AKB48 in Akihabara, Tokyo, in 2005, the concept changed and became much more down to earth, with the members becoming approachable – kind of the ‘girl next door’.”
Indeed AKB48 did much to pull Japan’s music industry out of the doldrums in the early 2010s. In 2011, the increase of CD sales in Japan was a sharp contrast to the decline in the world. Fired up by its popularity, the group expanded into sister projects, which were similar to AKB48 but in different locations, such as Nagoya’s SKE48, Okayama’s STU48, Niigata’s NGT48, and Osaka’s NMB48. Soon AKB48 had become popular all over Japan and spawned other sister groups abroad, among them JKT48 in Jakarta, SNH48 in Shanghai, BNK48 in Bangkok, TPE48 in Taipei, and MNL48 in Manila.

AKB48 became one of the highest-earning musical performers in Japan and was characterised as a social phenomenon.
Like other national and international sister groups, Thailand’s BNK48 follows the same format. Launched in early 2017 by Jirat Bawornwatana, executive chairman of Rose Artist Management, the Thai idol girl group, which is made up of 26 carefully selected members, has helped the local music scene recover after several years of stagnation.

The public can’t get enough of BNK48. The girls are constantly in the media, at events and attending product launches. The group has so far been the presenters for True Move H, Fuji Film, AP Honda, Jele Beautie, and Yayoi as well as being shown as a major supporter of Thailand’s National Football Team Changsuek.
“The platform of AKB48 is ‘idols you can meet’ and merchandise – usually a free ticket for a handshake or concert event – is given along with their CDs to boost total sales. In fact, AKB48 was initially created to be the presenter of various Japanese products including cars, motorcycles and drinks,” says Wim, who has made Sweat 16 into his talent agency’s first idol group.

“The idol is a role model that people can follow and dream about being equally as successful. Each role model must have her – or his – own path. No one was born perfect. We all have to fight for our dreams. Being an idol isn’t only showing off an ability to sing, dance and perform. It’s also about attitude, thoughts and goals in life. It’s about encouraging each other. That’s why fans are passionate about BNK48 and follow them so closely,” explains Pongchuk “Ae” Pissathaporn, who is responsible for BNK48.
“Idols and artists are not the same. An artist can prove himself with his work, but an idol proves him or herself through his/her efforts. Not every member is perfect at singing and dancing but all of them work to overcome obstacles.”
Wim considers AKB48 and BNK48 as platforms, pointing out that they sell themselves through CDs and performances.
“While BNK48 follows the same bible as AKB48, Sweat 16 is freer. We don’t want our 13 members to dedicate themselves to the band 120 per cent because they have their different daily lives. I want to see the best worker, the best student, the best daughter, or even the best member in order to inspire other girls. I need Sweat 16 to build this platform.”

Musically, BNK48 and Sweat 16 cover Japanese singles. BNK48’s songs are from AKB48, with the lyrics translated into Thai and the music rearranged to suit their style.
For example, BNK48’s song “Cookie Siangthai”, which is taken from AKB48’s “Koisuru Fortune Cookie”, quickly became popular, with just about every teenager in the land knowing the line “aeb mong ther yoo na ja”, meaning “I’m secretly watching you”.
“This song is about myth and prophecy. The first step is to translate the lyrics in an essay format then adjust them so that they conform to our grammar, adding Thai idioms and tone marks. ‘Aeb mong ther yoo na ja’ quickly caught on. The words are optimistic and the touch the heart. And we’ve worked on the choreography too,” says Ae, who has team up with other songwriters such as Boy Trai Bhumirat, Stamp, Lipta, Pe Mind, Golf Superbaker, and Waan Thanakrit.
“Sweat 16’s first two songs are ‘Wing’ (‘Run’) and ‘Moongming’ (‘Love Attention’), which are covers of Japanese songs. The next singles will be penned and composed by Boyd Kosiyabong and Suthee Sangsereechon before being arranged by a Japanese engineer in the idol style. I would like Thailand to have Thai songs for Thai idols,” says Wim.
Like AKB48, BNK48 has a campus. The idol group has taken over part of the fourth floor of The Mall Bang Kapi and turned it into a theatre for their shows, rehearsals, instruction and recreation. Both BNK48 and Sweat 16 will go on a nationwide tour soon and Sweat 16 has already been booked to perform at the 2018 Okinawa International Movie Festival 2018 in Okinawa from April 19 to 22.
And now boy idols groups are making an appearance. 4Nologue’s chief executive Anuwat “Wutt” Wichiennarat has recruited nine boys – Thanapob “Tor” Leeratanakajorn, Teeradon “James” Supapunpinyo, Chonlathorn “Captain” Kongyingyong, Lapas “Third” Ngamchaweng, Sivakorn “Porche” Adulsuttikul, Jakrin “Jackie” Kangwankiertichai, Kritsanapoom “JJ Pibulsonggram, Pharis “Ice” Intharakomal, and Chisanucha “Mew” Tantimedh, for his group, Nine by Nine, or 9x9.
“I’m very excited to see the popularity of BNK48,” he says.
“We would like to build an idol group that can perform to international standards – good singing, good dancing and good performance.
“Nine by Nine is a pilot crossover project in cooperation with Nadao Bangkok and GMM Grammy’s MBO and we will be taking the lads to perform across the Asean countries when they are ready.”

So Who's Your Idol?

- To find out more about Nine by Nine, check out Facebook.com/4NOLOGUE/