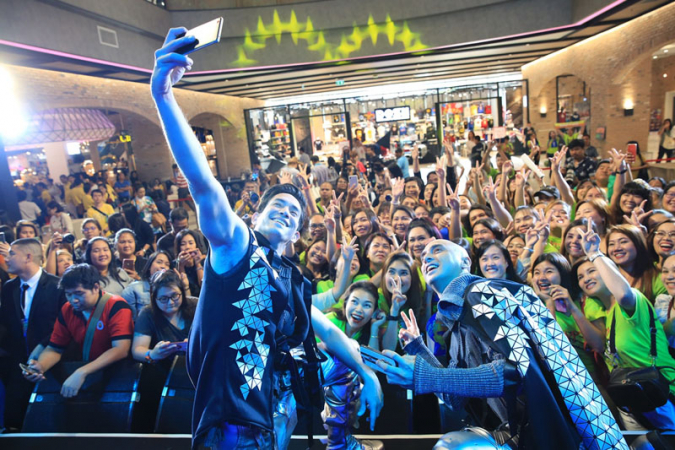 Louis and Joni take a selfie with their fans.

Raptor, RS Public's very popular duo from the 1990s, are making a return to the stage on September 7 as they celebrate their 25th anniversary with the full-scale show "Raptor Evolution 25 Years Mai Mee Krengjai" at Impact Arena, Muang Thong Thani.

While aware of the Thai love for nostalgic concerts, organisers probably weren’t expecting tickets to sell out within 20 minutes of going on sale – faster than those for the duo’s "Encore" concert in 2012 at the same venue – but quickly responded by announcing another round at 2pm on the same day. Joni and Louis of Raptor perform on September 7 at Impact Arena.

“Twenty-five years ago, Raptor was the top teen idol and their albums sold more than one million copies. I don’t think fans today have the same kind of relationship with the artists but we want to take them back to the 1990s and enjoy Raptor again,” said Prin Minsuksaeng, managing director of Coolism, the operator of the Cool Fahrenheit radio station. “The concert’s title refers to how the two have developed over the last 25 years.” “The concert will show our evolutionary mutation while still highlighting our original sound,” added Louis Scott, who together with Joni Anwar makes up Raptor. Both men are working hard for the concert with voice trainer Patcharida Wattana and choreographer Peerapan Kumarnsit, aka Phee Hijack.

Asked about their look on the poster, Louis explained that the young creative artist had gone back to the duo’s most successful album “Waab Boys” and reimagined the two as modern-day hip-hoppers. “I been watching our previous concert videos and found the one where we played at a pub in Khorat, Nakhon Ratchasima. That was the first time we returned to the stage and saw fans' enjoyment and happiness. That was the starting point for designing this show,” Joni said.

Tickets for the earlier show are now at sale at Thai Ticket Major.