With a prime location between the Imperial Palace and Tokyo Station, it’s easy to understand why Marunouchi is one of Japan's most prestigious and popular business districts.

Leading property developer AP (T้hailand) loves the area too, recently leading the Thai media and four of its top Open House students to the heart of the Japanese capital to explore new ideas in land development through its Japanese partner Mitsubishi Estate, which owns and manages one third of Marunouchi, an area that’s home to more than 4,000 companies housed in 100 buildings and which draws some 230,000 workers every day.

This year, AP is focusing its attention on sustainability and looking at ways to bring a green ambience to the spaces in which we live and work. And ever since Mitsubishi Estate invested in AP Thai six years ago, the property developer has been organising field trips to Japan and adapting the ideas it gains from these visits to its developments in Thailand. Two key places are the Marunouchi business area in Tokyo and the Izumi Park Town, a town in Sendai which was built by Mitsubishi Estate and which is still being developed even though the first house was built 50 years ago. 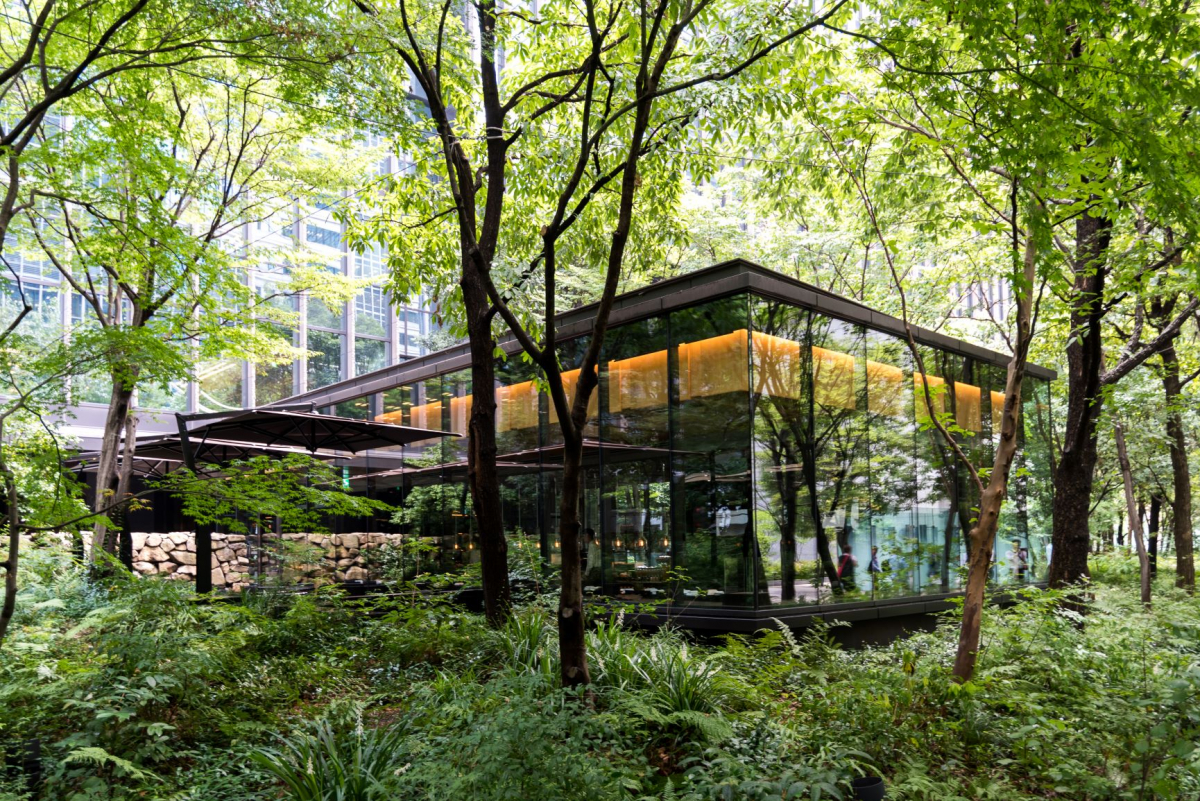 Our first stop on the Tokyo leg of the visit is Mitsubishi Estate’s headquarters in Otemachi next door to Marunouchi where Takanori Murakami, deputy general manager of the company’s Urban Development Promotion Department, is on hand to explain in detail how a green environment including a man-made forest has been incorporated within the concrete skyscrapers in the Otemachi, Marunouchi and Yurakucho areas. He tells us about the short-term initiatives the company wants to accomplish in 2020 and its long-term plans it aims to complete by 2050 before we are heading to a site visit around the area where the small forest surrounding the Cafe by Aman. This is a popular spot among salaryman, a place to eat their lunch and take a break from the concrete jungle. 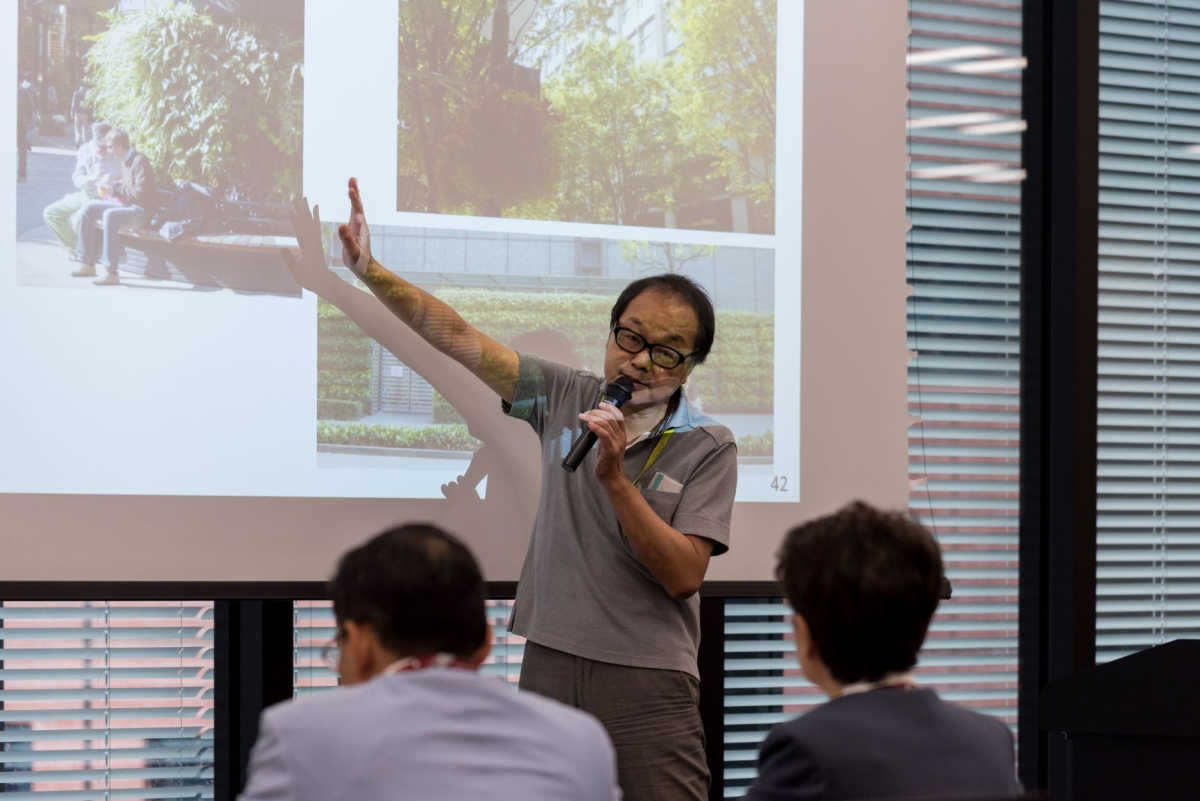 Over the last decade, Marunouchi has been undergoing a major facelift led by Mitsubishi Estate. Older office buildings have been replaced by new skyscrapers with offices on their upper floors and a variety of shops and restaurants on their lower floors. These newly opened

shopping and dining complexes have revitalised the formerly unexciting business district and are drawing an increasing number of non-business visitors too. This mecca of business is brought closer to nature through plants and trees that fill every vacant space including the

pillars of the buildings and the walkways.

During the Edo period, Marunouchi (literally "within the enclosure") was located within the outer moats of Edo Castle and contained the residences of some of Japan's most powerful feudal lords. During the Meiji Restoration, an old castle became the Imperial Palace and the

Meiji government decided to sell the land that had once been home to the residential quarters of those feudal lords to the private sector to encourage urbanization. Only Mitsubishi understood the government's intentions and purchased all the land. Their conviction that a modern state required an international business centre opened the doors to the future of Marunouchi.  Ichigokan, which literally means the first building, was the first edifice to be constructed in this area by Mitsubishi Estate back in 1894. 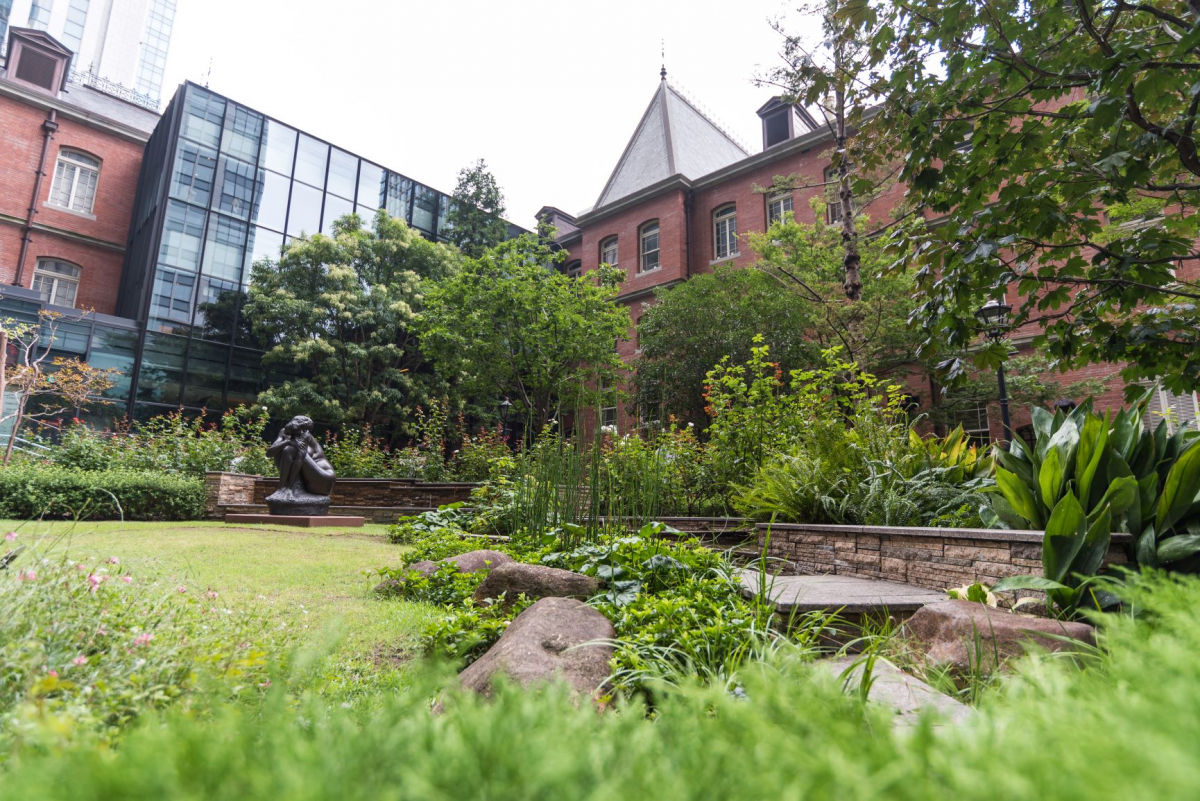 The red brick townscape was designed by British architects and earned it the nickname ‘London block’. Tokyo Station opened later in 1914.

The Ichigokan was reconstructed and reopened in 2010 as a museum focusing on 19th-century Western art. The area has now grown to become the lungs of the city, bringing people and nature together into a seamless coexistence.

One of the best examples of green living is Ichigokan Plaza, which is home to countless species of plants that take turns to bloom depending on the season. A sizeable green space is provided for visitors to rest, relax and be immersed in the natural surroundings while the

space design and lifestyle aspects reflect the coexistence between urbanites, building construction, and large trees. One of the examples is The Cafe by Aman that stands out thanks to the minimal aesthetics of its design and decoration with massive transparent floor-to ceiling glass that look out to 3,600 sqm of urban forest.

Mitsubishi Estate’s residential arm brings nature to residential development through the Bio Net Initiative, which carefully chooses planting inside the project to harmonize with the surrounding area.

Launched in February 2015, the Bio Net Initiative has now been developed into 150 projects under the condominium brand The Parkhouse. The initiative was chosen as the winner of Good Design Award of 2015 and Excellence Prize of the Biodiversity Action Grand Prize 2015 for its environmentally friendly design with outstanding considerations of flora and fauna such as birds, butterflies, flowers and grasses. The Parkhouse exists as a part of natural ecosystem and the design takes into account the appropriate number of plants, and quantity of earth water, and wind required to match the holistic space of the project to ensure total harmony. Eighteen of the 150 projects have received the ABINC biodiversity certification from the Association for Business Innovation in Harmony with Nature and Community. 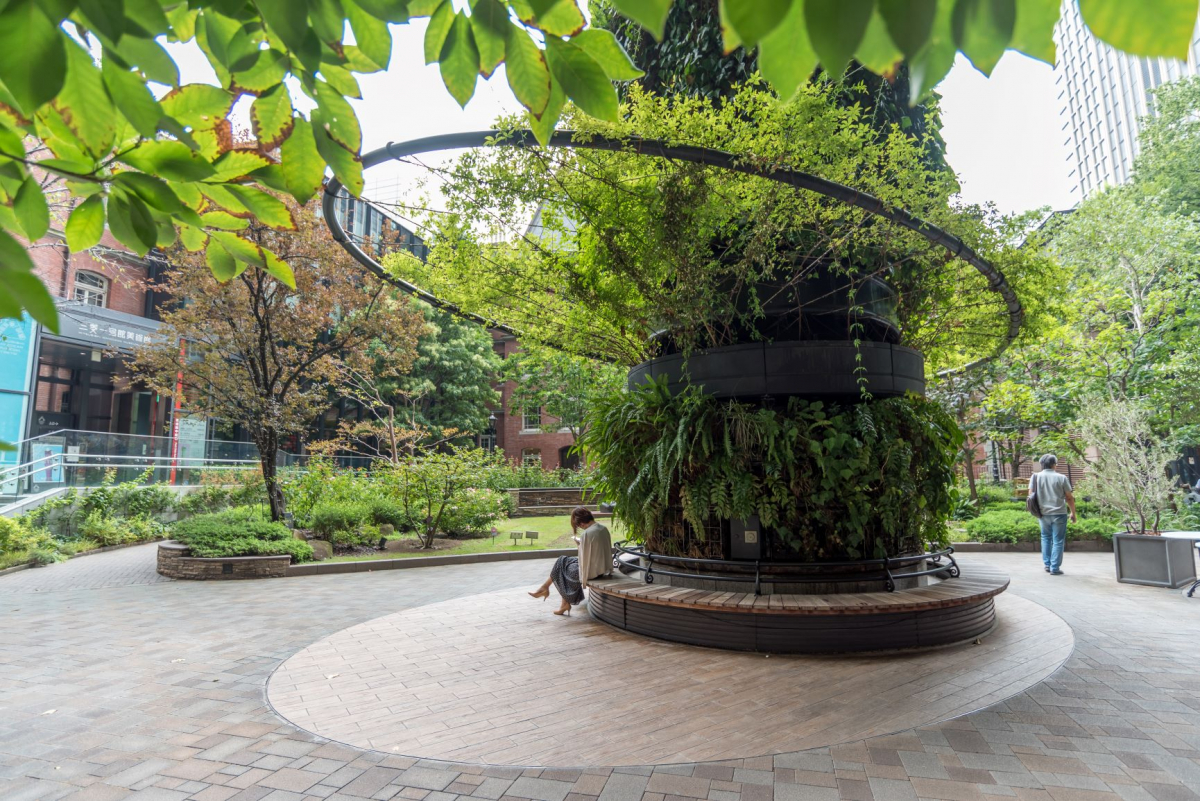 The site visit and details provided by Mitsubishi Estate, says Vittakarn Chandavimol, chief of AP’s Corporate Strategy and Creation, shows the AP team, Open House students as well as Thai media how everyone can create a better place. For AP, he adds that the trip will inspire his team to adapt these concepts into their development projects.

“Since the real estate business needs to grow hand in hand with city development, we attach importance to improving and elevating living quality under our AP World vision. We seek to draw a blueprint of good quality of life for today and the future. Thus we have come up with

the ‘Grow’ philosophy which offers a master plan for sustainable development. Along with developing AP Group’s residential projects, we take into consideration functionality and convenience of residents in our space design and also aim to understand how urban people can live with nature, especially developing residences with green areas inside. We hope to offer another piece of the jigsaw for a perfect ecosystem that allows for the coexistence of urbanites, buildings, large trees and various ecosystems and makes life safe and sound physically and mentally from the inside out. We believe it will ensure quality living

for big-city residents,” he says. 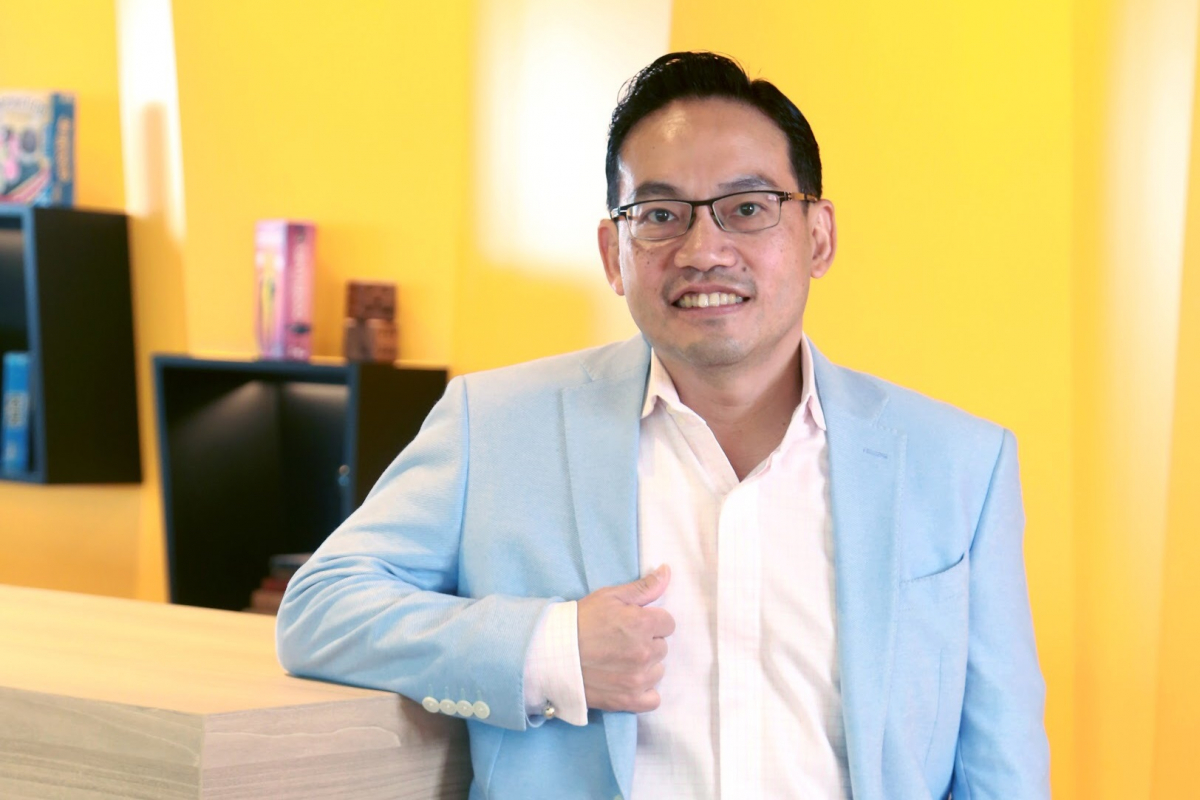 The concept has already been put into practice in AP’s new condominium project Life Sathorn Sierra, which is located just a few minutes walk from Talat Phlu BTS station. Designed as a prototype of sustainable, balanced vertical living, the project stands out for its Forest Park

in the City concept and is now available for sale.

This is the first of a two-part series on Mitsubishi Estate’s projects in Japan. The next feature will take readers to the Izumi Park Town in Sendai, Miyagi Prefecture, here https://www.nationthailand.com/news/30376030