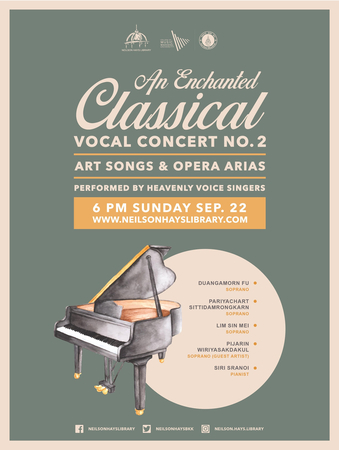 Thailand's brightest young opera singers are returning to the Neilson Hays Library for a night of enthralling classical music. They will perform art songs and popular arias from operas such as Georges Bizet’s Carmen, Gaetano Donizetti’s Don Pasquale, and Engelbert Humperdinck’s Hansel and Gretel.

This is quite a unique opportunity to delight in music and appreciate the talent of Heavenly Voice Singers from The College of Music, Mahidol University, in a very intimate setting, hearing and seeing musicians up close.

The performers of the night will be soprano Duangamorn Fu, who was awarded the second prize in Art Song category, and the Espoir prize in Vocal Opera course at the 19th Osaka International Music Competition; soprano Pariyachart Sittidamrongkarn, first-prize winner of the Settrade Music Competition Thailand; and soprano Lim Sin Mei, who was awarded second prize in the Beijing Municipal Government “China Cup” Vocal Competition in 2015.

As a special guest artist, soprano Pijarin Wiriyasakdakul, winner of several gold medals in Settrades Music Competition Thailand and who has competed internationally in Japan, France and Germany, will be participating in the concert, too.

These sopranos will be accompanied by the pianist Siri Sranoi, who has played in masterclasses with international pianists, such as Professor Istvan Bonyhadi, Professor Lambis Vassiliadis and Professor Rolf-Dieter Arens.

You can purchase tickets online, at the library, or reserve seats by calling 02-233-1731, or emailing [email protected]

Please note that reserved seats should be paid for within 3 days after the booking, after that they will be released.

An Enchanted Classical Vocal Concert, No. 2"