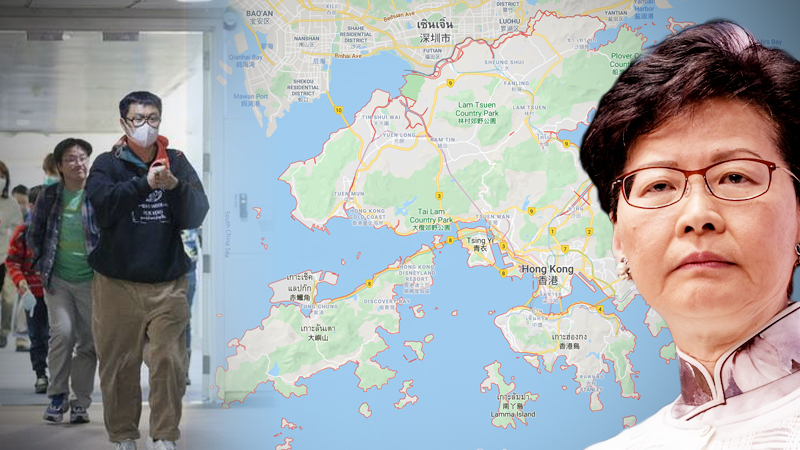 HONG KONG - Chief Executive Carrie Lam on Monday further restricted the territory's border crossings with mainland China to curb the coronavirus outbreak but stopped short of a blanket closure demanded by hospital workers who will now execute a five-day strike.

The strike - organized by a pro-democracy union formed after months of political unrest - represents a conundrum for Lam. Beijing's handpicked leader, who must weigh the intensifying public health crisis and widespread disaffection toward her government against her obligations to, and instructions from, the Chinese Communist Party.

On Tuesday, Hong Kong reported its first death from the coronavirus outbreak. The 39-year-old man had been in stable condition late last week, according to the Center for Health Protection, but deteriorated quickly in recent days. He had traveled to Wuhan on Jan. 21, returned to Hong Kong two days later and was admitted to the hospital last Friday.

Hong Kong, which has its own immigration system but is under China's sovereignty, has reported 15 cases of the novel coronavirus infection. More than 17,000 cases and 360 deaths have been confirmed in mainland China, prompting many nations - the United States, Singapore and Italy to name a few - to impose sweeping and unprecedented travel restrictions on Chinese nationals and foreign travelers who have passed through the country.

China's neighbors such as North Korea and Mongolia have sealed their borders in an effort to halt the spread of the virus, which has reached more than 20 countries.

Lam said Monday she would leave open only three of the financial center's 14 crossing points with mainland China, including the airport. Hong Kong had already closed six border checkpoints, but Lam said there was a need to take further steps "because of the latest developments in the outbreak." She said she hoped the closure would make it inconvenient for people to travel to mainland China, and provide a disincentive for people to cross.

But a full border closure was untenable, she said, because of the "almost unique" situation between Hong Kong and mainland China, including a "very close relationship" between the people on both sides.

There is "very legitimate and genuine cross-border traffic that we have to handle, otherwise we will end up with more troubles for this city and the seven million people in Hong Kong," she said, citing cases of people who live in Hong Kong but work in the mainland, and vice versa.

She added that her government is "not the enemies of the Hong Kong people," and is working in their best interest. Calls to shut the border have come from across the political spectrum.

Her moves, however, were insufficient to appease thousands of medical workers, who on Monday launched the first wave of a gradual strike designed to pressure the Hong Kong government to fully close the border.

The striking doctors, nurses and others are from the Hospital Authority Employees Alliance, a union formed following anti-government protests that rocked Hong Kong last year over fears that the city has been losing autonomy and ceding control of its affairs to Beijing.

The union on Monday said it will escalate the strike to involve more of its 18,000 members - including front-line medical workers - citing the government's unwillingness to cede to their demands and a breakdown in talks with the Hospital Authority, which manages the territory's government hospitals.

"Our actions have forced the government to gradually close the border," said union chairwoman Winnie Yu, speaking after Lam's announcement. Yet, she added, the government "has not directly responded to our demands."

"We cannot see [Lam's] sincerity to shut down all the borders, and to cut off the source of the virus," Yu added.

Long lines formed at hospitals on Monday as nurses and doctors signed up at designated booths to register their participation in the strike. Across the city, residents wore white ribbons in solidarity with medical workers.

Employees in Hong Kong's financial district, which is quieter than usual as companies institute work-from-home arrangements to halt the spread of the virus, held a small lunchtime protest supporting the medical workers, reminiscent of demonstrations at the height of the political unrest late last year. Some wore full-face respirators.

Tony Ko, the chief executive of the Hospital Authority, said Monday that the strike was already affecting services. Cardiac surgeries have had to be rescheduled, he said, and a shortage of staff members has been reported in pediatric wards.

"We are seriously concerned about the situation," he said. "Patients may be put at unnecessary risk."

Lam, eager to quash any perception that civil resistance can sway her government, said her decision to widen the border closures has "absolutely nothing to do" with the medical workers' strike.

"If anyone thinks that by resorting to such extreme measures, the government will be made to do something that is not rational or will harm the public good, they will not get anywhere," she said.

"This is a tactic that smacks of political considerations. We believe it really doesn't help protect public health and the fight against the disease."