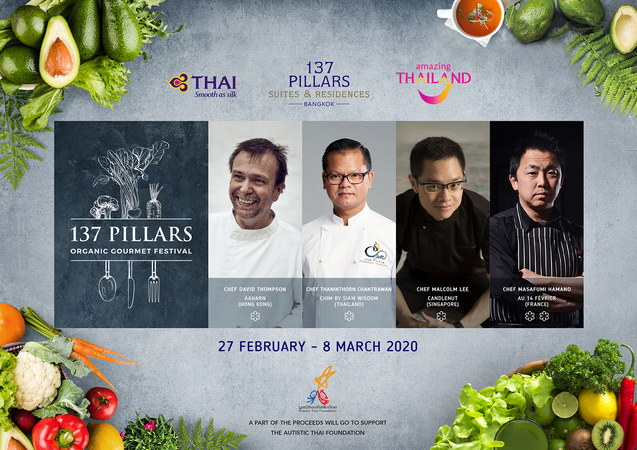 Chefs trailing Michelin stars will be keeping the spotlight on Asian cuisine throughout the 137 Pillars Organic Gourmet Festival, a gourmet food and drink extravaganza taking place on the weekends of February 27-March 1 and March 5-8.

Part of the proceeds will go to the Autistic Thai Foundation, a non-profit organisation that runs 20 centres where autistic children are taught the skills that they need to take care of themselves.

“I have always been a firm believer in nature and the wealth that it has to offer,” said 137 Pillars chief operating officer Christopher Stafford. “Given the changes in our society, it is now more important than ever to share, celebrate and acknowledge the importance of being in tune with nature and being innovative in its offerings.

“Our previous organic festivals have proved extremely popular in Chiang Mai and Bangkok, and we hope this edition will encourage our guests to closely examine the way the food they eat is produced and hopefully support the efforts made by farmers and companies to bring to the table ingredients that are organic and sustainable.”

The Organic Farmers Market will have among its vendors the Royal Project Foundation, Butcher shop by Arno’s, Le Cordon Bleu, Kad Kokoa and Captain Hook’s Smokehouse.

Chef Thaninthorn Chatrawan of the one-Michelin-star Chim by Siam Wisdom presides in the kitchen on February 29 with a fantastic menu including centuries-old recipes prepared using modern techniques.

There will also be Sunday brunches on March 1 and 8, the first with Thaninthorn “Noom” Chantrawan, the hotel’s executive chef Maxim Baile and chef de cuisine Nanang Prasetya Aditama from Nimitr, and the second with Malcolm Lee and Masafumi Hamano.