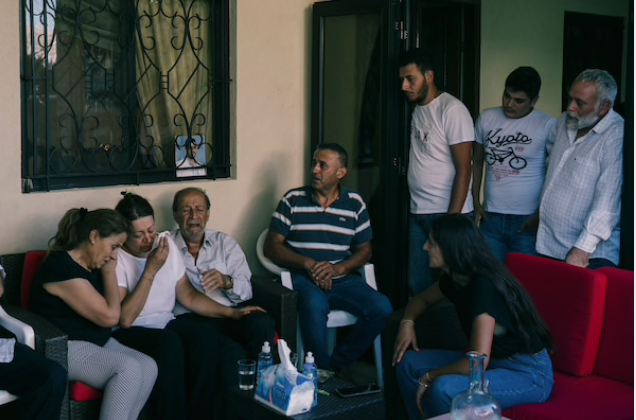 Charbel Hitti's mother, second from left, sits next to Charbel Karam's father as they cry for the young men feared lost in the blast. Hitti, 22, and cousin Najib Hitti, 20, were firefighters along with Karam, 32, their uncle. The three grew up as best friends in the village of Qartaba. CREDIT: Photo by Lorenzo Tugnoli for The Washington Post

BEIRUT - Shortly after Charbel Hitti got to Beirut's port on Tuesday, he felt something was off. He turned to a colleague behind him as he put on his black-and-yellow firefighter gear and said so. And then everything went black.

Hitti, 22, along with his cousin and uncle, all Beirut firefighters, had responded to what they assumed was an ordinary blaze in a warehouse at the city's port. Hitti and his cousin, Najib Hitti, 20, had sped off in a firetruck while his uncle, Charbel Karam, 32, had jumped into an ambulance.

On the way, Karam had taken the chance to place a video call to his wife and 2-year-old daughter. "We're firefighters!" he told his daughter playfully. "We're going to put out a fire." He hung up as the firetruck sped past, with Najib at the wheel, and the ambulance raced to catch up.

Charbel Hitti turned to another firefighter, who was recording the scene on her cellphone, and he shared his sudden misgivings.

He never had a chance to explain what seemed so wrong.

A tremendous explosion, ignited in a warehouse storing about 2,750 metric tons of highly volatile ammonium nitrate, instantly obliterated much of the port, sending a huge mushroom cloud of reddish smoke into the air and a staggering shock wave across much of downtown Beirut.

At least 10 firefighters and other emergency responders are thought to have been killed. (The cellphone recording, however, survived.)

Charbel Hitti, his uncle and cousin had grown up together as best friends in the small mountain village of Qartaba an hour outside the city, got jobs together as Beirut firefighters and made sure they had shifts together so they could put out fires as a team. As a result, they almost certainly lost their lives together.

But no one is holding a funeral so far, not until they recover at least some of their remains.

On the night of the explosion, family members scrambled down to Beirut, frantically rushing from the port to the destroyed firefighter headquarters to every hospital that was treating the injured.

"I was praying that I find . . . " said Najib's sister, Marinella Hitti, her voice trailing off. "Their head. Or their hand. Or their foot. I was praying I find a part of their body, any part I can identify them by."

She tore through the hospitals, lifting sheets off injured men. One blackened victim, not yet dead, could have been her brother Najib. She grasped at his arm, trying to locate the Chinese character tattoo he had.

But it wasn't him.

Her uncle George rushed to the hospital morgue, opening every refrigerated mortuary cabinet. One body looked like that of his son, Charbel Hitti, and he started searching for a telltale tattoo. "He started flipping his body left and right to see if it's him," Marinella recalled. "But there was no tattoo."

And there is still no news. The families cannot turn on the television anymore. Marinella continues to urge on her friends who work with Beirut's civil defense force: "I tell them, "These are your brothers, like they're my brothers. Shout out for them, maybe they'll answer. Because I need him.'"

The nights are the hardest, because that is when the search parties stop their work, unable to continue because Beirut lacks the electricity needed to provide light for the searches.

Karam's wife, Karlin Hitti, 24, said she does not sleep, waiting for any word of any remains of her husband, brother and cousin. (Karlin is also Najib and Marinella's sister.) She goes to church and screams, confident she says that the Virgin Mary is listening to her.

Karlin passes her time running through the memories of the three firefighters. Her sentences are halting, incomplete. Her words get caught in her throat. She rocks back and forth in her seat, her eyes glazed from exhaustion and days of crying.

"When they would come back from their service, they would come here and reach the top of the street and would call out to me: 'The Nescafe is finished, can you make us Nescafe? Let's drink more Nescafe.' " Her voice broke as she spoke. "They would come after every shift and sit next to me."

A ghost of a smile appeared when Karlin recalled her husband. "We've all been together since we were children. I used to say, if I ever got the chance to be with someone like Charbel, I would immediately marry him," she said. "I used to say, 'What a guy, handsome and green eyes.' "

They'd had an affair, keeping it secret from the tightknit village, she recounted. The secret lasted all of one week. On June 25, they'd celebrated their third anniversary in the best way they could under coronavirus lockdown: alone in their RV under the trees, dining on delivered sushi. Karlin laughed at the memory, visibly surprised by her own peals.

Her sister Marinella will sleep only in their brother Najib's bed. She has placed his motorcycle helmet in a place of honor in the living room and holds on to a tiny Velcro patch bearing the Lebanese flag - part of Najib's uniform.

"Usually, when one person is lost in a family, it's a tragedy in every sense of the word," Marinella said. "We have three. Three heroes that left us here. And all we can do is pray for them."

Then anger took over.

"No one told them what's inside. No one told them," Marinella said, referring to the ammonium nitrate in the warehouse. It had been stored there for six years despite repeated warnings by government officials of the peril it posed. "If they had died martyrs for Lebanon, we wouldn't have a problem. But they died as martyrs for what? For what? So the thugs on the seats keep money in their pockets?"

Her voice growing strong, Marinella continued, her eyes fixed on a faraway spot in the room, giving the illusion she was speaking to herself.

"We're going to the streets. We're going to have a revolution," she said, venting her rage at Lebanon's political class, whose corruption and ineptitude are now widely blamed not only for the explosions but for the country's wider economic collapse. "They took everything else from us, but not our brothers," she said.

Marinella scrunched up the front of Najib's Harley Davidson T-shirt, which she now wears, and inhaled the aroma.

"I can still smell him," she said, closing her eyes and smiling peacefully. "He loved Harleys. He wanted to get one. He didn't have time."