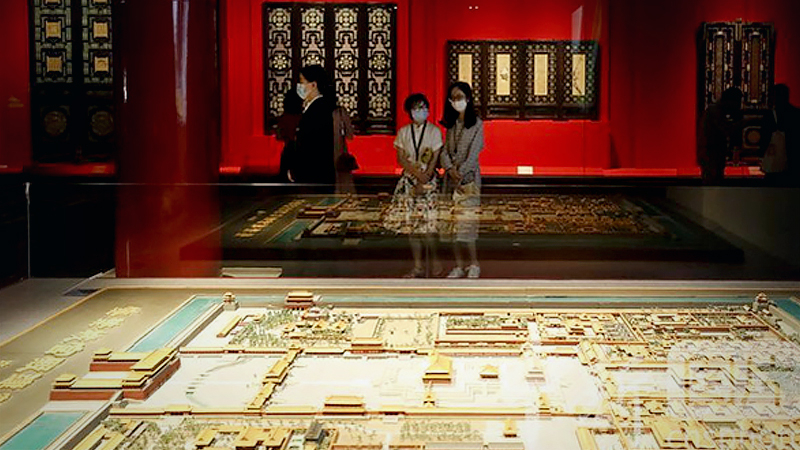 An exhibition marking the 600th anniversary of the completion of the construction of the Forbidden City opens in Beijing on Thursday. [Photo by Jiang Dong/China Daily]

Times change, but some cultural legacies can be everlasting.

A special exhibition has been set up at the entrance of the Palace Museum in Beijing, also known as the Forbidden City, for visitors to review the remarkable development of this architectural wonder.

The exhibition, Everlasting Splendor: Six Centuries at the Forbidden City, opened in the Meridian Gate Galleries on Thursday and will continue through Nov 15. It marks the 600th anniversary of the completion of the construction of the compound, China's imperial palace from 1420 to 1911.

Over 400 cultural relics are displayed at the exhibition, which reflect the history of the Forbidden City's construction, the development of its layout, and how it has been protected and renovated in the past decades.

"Palatial constructions were the most splendid chapter in the history of ancient Chinese architecture," Wang Xudong, director of the Palace Museum, said on Thursday. "They always reflected the highest-level craftsmanship of their respective time.

"The Forbidden City, the world's largest remaining palace complex, is the pinnacle of ancient Chinese urban construction and architecture," he said.

He explained that the Forbidden City highlights the importance of rituals and the harmony between humans and heaven.

Wang said it also reflected how different cultures come together. For example, the Qing emperors, who were from the Manchu ethnic group, introduced elements of their ethnic culture to the Forbidden City. Some buildings also have a combination of Chinese and Western fine arts.

"So, the Forbidden City is also an example showing the inclusiveness of Chinese civilization," Wang said.

The exhibition also reflects important events in the Forbidden City's 600-year history, with exhibits including items used in its construction and historical documents.

Zhao Peng, director of the department of architectural heritage at the Palace Museum, said: "The exhibition in the Meridian Gate Galleries is only a prelude. We want to usher visitors into a journey through time and space."

He said that the curators have identified nine key areas as "checkpoints", where visitors can get more information by scanning QR codes.

In 1406, Zhu Di, the third emperor of the Ming Dynasty, decided to move the national capital from Nanjing, capital of today's Jiangsu province, to Beijing. After a decade of preparation, construction of the Forbidden City took place from 1417 to 1420 in the heart of Beijing.

Although the layout of some parts has changed, with the renovation and rebuilding of palaces, its basic structure remains the same.

The Palace Museum was established in 1925. In 1987, the Forbidden City became a UNESCO World Heritage Site. The museum houses 1.86 million cultural relics and received over 19 million visitors in 2019.

"The Palace Museum has made many achievements in recent years in terms of exhibitions, the renovation of ancient architecture, academic studies, digitization and many other fields," Hu Heping, minister of culture and tourism, said at Thursday's opening ceremony. "These achievements have rejuvenated the old Forbidden City."

"A duty to human civilization has been fulfilled as the Forbidden City has been well preserved," Hu said. "But it needs our further efforts to tell its good stories and better display its cultural legacies at home and abroad."