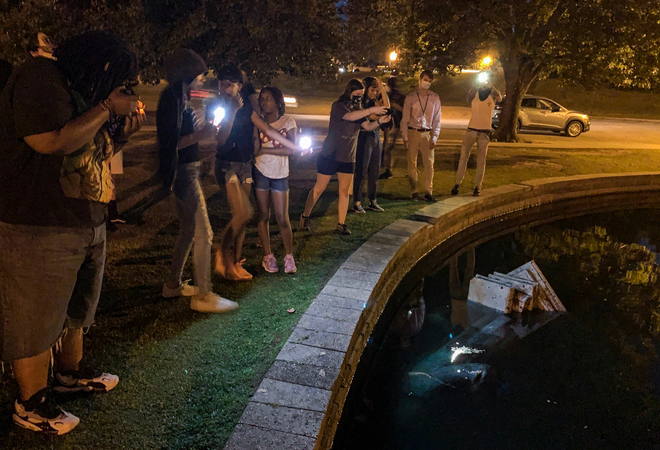 A statue of Christopher Columbus is dumped into a lake in Richmond, Va. MUST CREDIT: Washington Post photo by John McDonnell

ROME - While many Christopher Columbus statues were toppled this year in the United States - dragged into Baltimore's Inner Harbor, beheaded in Boston - the towering marble monument to the explorer in his hometown, Genoa, Italy, is disturbed only by pigeons.

As Americans feud over whether Columbus Day should remain a federal holiday - or whether the man who first charted the transatlantic route in 1492 should be remembered as a colonial oppressor - in Italy, Columbus is still held in high esteem. Italians tend to think of him as the sum of their best qualities: ingenuity, courage and resilience.

"Columbus represents genocide," protesters had written in Richmond, Va., after throwing a Columbus statue into a lake. In Italy, that's just not the case.

The disconnect may have to do with a lack of knowledge among Italians about the more objectionable aspects of Columbus's life and legacy. But scholars say there's also a national defensiveness that has gotten in the way of further understanding.

Italians hear little that is critical of Columbus in school. A 2019 high school textbook, "History and Forgotten Stories," says only: "Columbus exhibited unquestionable skills as a navigator, but wasn't able to govern the new territories. Thus began the decline of his mythos and of his authority."

Giuseppe Marcocci, professor in Iberian history at the University of Oxford, said: "Italian school textbooks still present a clear divide between Columbus the discoverer and the subsequent arrival of Cortez the (Spanish) conqueror. In reality, the two processes are intimately intertwined."

Europe's former colonial powers have increasingly begun to reckon with the brutality of that historical period. Indeed, when the United States' Black Lives Matter protests spread to European cities, the chants were about both modern-day discrimination and colonial legacies. But Columbus - who sailed for Spain and served as governor of Hispaniola - has so far largely escaped a reassessment in Italy.

"Some vague awareness of his colonist brutality has only in the last few years made it into classrooms," said Marina Nezi, a newly retired high school history teacher in Rome. "But (Italy has) a very long history, and school years are often not enough to tell the whole of it."

The idealized version of Columbus is crystallized in Italy's most famous encyclopedia, which defines him as a "great navigator, discoverer of America." When older Italians think of Columbus, they may visualize Gabriel Byrne's solemn, silver-haired portrayal in a mid-'80s Italian American TV production.

To be sure, the United States held an almost universally romantic view of Columbus until sometime after the celebration of his voyage's 500th anniversary, when people started looking into the unsavory parts of his past.

"In 1992 America, (Columbus's reputation) was still immaculate. Thirty years later, it's a whole other era. The current Italian attitude is still stuck at that time," said Giulio Busi, author of "Christopher Columbus, the Sailor of Secrets."

Busi suggested that Italians have resisted their own reassessment, because they've taken U.S. criticism of Columbus personally.

"There's a firewall of Italianness that has prevented the critique from breaking through and garnering a meaningful following," Busi said. Toppling his statues "feels like an attack on our nationality."

This summer, a national newspaper launched a campaign to collect signatures: #HandsOffColumbus. Facebook groups were formed.

"More than 500 years after his death (Columbus) has to suffer new insults," Francesco Giubilei and Marco Valle wrote in the conservative newspaper Il Giornale in July. "Thinking that by destroying his statues and eradicating his memory one may solve (U.S. society's racial tensions) is hypocritical and wrong."

Andrea Castanini, deputy editor of Genoa's Il Secolo XIX daily, said his newspaper has published several pieces about the attacks on Columbus statues in the United States, with Italians voicing their dissent. "He's a local hero, and residents were defending him, for what that's worth. They are very proud of him," Castanini said.

Men like Columbus, wrote Gabriella Airaldi in one such appeal, "have contributed to building our identity. By destroying (them) you ultimately harm yourself."

Italian right-wing politicians, too, have been calling out for the safeguard of the national hero's monuments in the United States.

Responding to the removal of a statue in Columbus, Ohio - a onetime gift from Genoa - Giorgia Meloni, leader of the Brothers of Italy party, called the sailor "a great Italian" and proposed: "Let's get it back and display it in one of our beautiful squares ... lest it lies abandoned in some warehouse."

"Against Columbus, like ISIS. Shame on you," Matteo Salvini, leader of the far-right League party, wrote on Facebook, comparing Black Lives Matter protesters to "Islamic terrorists."

Columbus has played a role in identity formation on both sides of the Atlantic.

In the United States, the idea of Columbus Day was promoted by Italian immigrants trying to project a sense of belonging in the face of sometimes violent xenophobia.

"Columbus becomes this figure that Italians latch on to as a way to get a foothold in this incredibly hostile environment that they find themselves in," Joseph Sciorra, of Queens College's Italian American Institute, told NPR.

In Italy, the mythology of Columbus was used to help hold a young nation together. It was politics, not science, that turned a man who lived in a time when Italy didn't even exist, and would only ever write in Spanish, into a lasting symbol of national pride.

The stark white monument in front of Genoa's railway station was dedicated in 1862, just one year after Italian unity was attained. It speaks the language of patriotic propaganda. The explorer leans on an anchor with an Indigenous woman sitting meekly at his right. The inscription reads, "To Christopher Columbus, the Fatherland."

The barely formed Italian state required Romantic heroes, and Columbus fit that bill because of what his real accomplishments had been.

"After him, the ocean was no longer labeled 'dark and mysterious'," says Franco Farinelli, geographer at the University of Bologna.

"People already knew the world was spherical. But Columbus was the first to translate that into a map, finding the shortest route and actually risking (his life) to follow it. It's a pillar of Western, performative thought. He invented the New World, but, of course, he did it for a conquest-oriented entrepreneurial operation."

During his seven years as governor of Hispaniola, the island that is now divided between Haiti and Dominican Republic, Columbus is reported to have ruled with a ruthlessness that was unfortunately common for the time.

"Establishing the specific individual responsibilities of Columbus is tough," Marcocci said, but within 25 years of his arrival, most of the native Taíno population had died from enslavement, massacre or disease.

More broadly, Columbus is blamed for opening the floodgates to European colonization - an indictment that some academics say is shaky at best.

Whatever the future of Columbus's fame, "his is a story of a rise and fall," Busi said. "If you look at it that way, toppled statues fit his mythos."