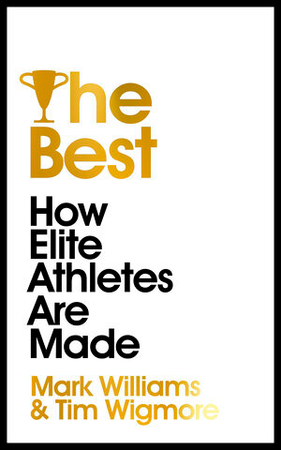 The Best: How Elite Athletes Are Made

By Mark Williams and Tim Wigmore

When Brandi Chastain scored the winning penalty kick in the 1999 Women's World Cup and ripped off her jersey to celebrate victory for the United States, she sent a thunderous thrill through the Rose Bowl crowd and inspired generations of athletes to come.

I was fortunate to witness such unbridled moments of triumph, superhuman feats from once-in-a-generation athletes like Roger Federer and LeBron James, in my years as a sportswriter. Journalists, fans and fellow athletes alike cannot help but marvel at greatness as something often intangible.

Now a new book breaks down the championship process, from birth to retirement, and the practice hours in between, making it at least relatable. In "The Best: How Elite Athletes Are Made," British sports scientist Mark Williams and sportswriter Tim Wigmore offer an engrossing guidebook for youth athletes, parents, coaches and perhaps even fantasy-league fans looking for a little insight.

It should not be taken as a bible. Sports do involve variables - a lucky bounce here, a freak break there. How athletes react to such changes, the authors argue, is a measure of their training and their will.

"We do not claim there is a simple template to becoming the best, or even maximizing your chances of becoming the best you can be - sport, like life, is altogether more complicated," they write in the prologue. "Leading athletes benefit from a complex, and interrelated, mixture of nature and nurture."

For readers used to literary sports narratives in the vein of John McPhee or David Halberstam, this is a much more academic enterprise. At times, the work is reminiscent of Malcom Gladwell's "Outliers: The Story of Success," which it references.

The strength of "The Best" is in its synthesis of hundreds of sports science journals, which Williams and Wigmore condense into clear sections amplified by original interviews with stars such as Steph Curry, Annika Sorenstam and Pete Sampras. The book covers sports as diverse as the National Football League and Norwegian cross-country skiing, soccer's Premier League and England women's field hockey. Even the underhanded free throw shooter Rick Barry gets a couple of pages.

Easy to follow, the chapters are divided into three sections, starting at the beginning: who becomes a champion based in part on siblings, birth date and community support.

"Part Two: Inside the Minds of Champions" is the meat of the material, showing the training and mental makeup athletes need under pressure. The best athletes have intense focus, but where they direct that focus is illuminating.

Joan Vickers, a scientist at the University of Calgary, introduced the concept of the "quiet eye," when in the final milliseconds of preparation for a shot, athletes fixate on one target - like the rim of a basket or the upper corner of the goal. The longer the duration of the "quiet eye," the more successful the outcome.

The tips range from useful to delightful in chapters like "The art of the con" (not a political reference) and "How to hit a ball in 0.5 seconds," which shows how athletes study their opponents's tics that might provide clues in returning a serve in tennis or hitting a ball in baseball or cricket. The Zen master Andre Agassi solved Boris Becker's serve by figuring out that Becker stuck his tongue out on his lip, literally pointing to where he was going to place it in the service box - center, left or right. The chapter "How to win a penalty shoot-out" does not mention Chastain but relays how England's men's soccer team overcame its penalty-kick curse. The little black book of opposing players' tendencies kept by Britain's field hockey goalie Maddie Hinch is a rich detail.

"Why athletes choke" had me nodding in sympathy. What golfer does not remember Jean Van de Velde's epic meltdown in the 1999 British Open? With a three-shot lead coming into the 18th hole, he somehow ended up in a river with no socks and shoes, trying to play the ball from there. Van de Velde lost the tournament in a playoff.

"When athletes are anxious, they reinvest attention on the technical execution of the skill, those aspects of the movement that have generally become automated - 'paralysis by analysis,' " the authors write. (It is a phrase they repeat often.)

And it relates to the "quiet eye" concept: "Athletes weighed down by anxiety also use their eyes less efficiently, in both dynamic and static tasks."

Although the lessons here are widely applicable, a caveat: This book does have a distinct British accent. When talking about the National Basketball Association in the chapter on neighborhood pickup games, the authors refer to them as "ad-hoc games." They call a playoff game a "match." There is football (never soccer) and American football. And spellings have not been changed for American readers, so we have the British versions of some words: practise and defence. And there is a whole lot of cricket.

The authors couldn't include everything, yet there is only a half-page mention of doping. It comes in a brief section on mental health. Athletes cheat for reasons beyond internal pressure; they often face financial incentives and government mandates. Then again, this game within the game could be - and has been - worthy of many separate books.

Part Three concludes with training methods and the science of success. I was pleased to see the authors include the famous team-bonding dinners led by Gregg Popovich, the oenophile coach of the five-time champion San Antonio Spurs, and the intense practice techniques of Women's National Basketball Association star Elena Delle Donne, who led the Washington Mystics to their first WNBA championship in 2019.

In "The next frontier," the final chapter about technology, the authors leave us, appropriately, with an eye to the future. Analytics make the scene, but the discussion of how teams are using virtual reality to assist injured players and simulate pressure situations left me thinking of the next generation of champions.

Still, for all the technological advantages of the Nike Vaporfly shoe, which has transformed the running world, the authors include the benefits of a low-tech training solution for any athlete: naps. Finally, something attainable for us mere mortals.

Robbins is a freelance writer in New York. She covered tennis for the New York Times from 2000 to 2010.