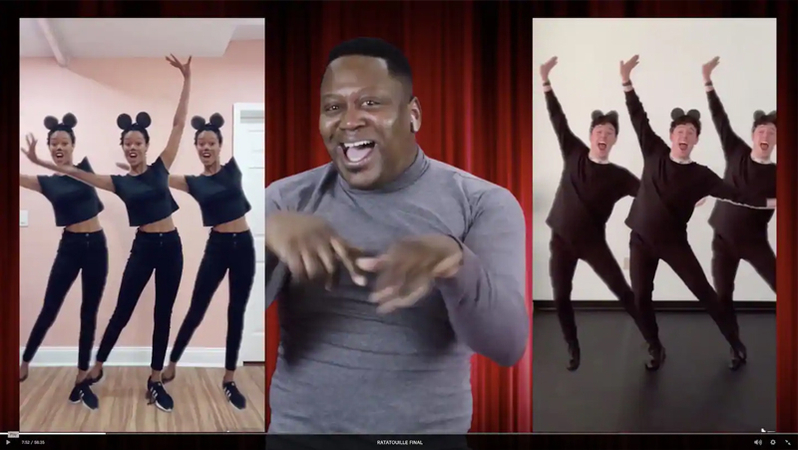 Like every other place in Theater Land, Tryout Town has resettled on the Web. It actually proves to be an advantageous setting for works-in-progress like the embryonic and revolutionarily assembled "Ratatouille: The TikTok Musical" that made its debut Friday, in a benefit digital production for The Actors Fund.

At a running time of 51 minutes, and with perhaps only half the numbers required for a full adaptation of the 2007 animated Oscar-winner, this "Ratatouille" is a mere appetizer. But with a winning Tituss Burgess as the human embodiment of Remy, the Parisian rodent who can stir up a mean beef bourguignon, it is a promising first course. And the harbinger of a future property on the school circuit or maybe even in some professional incarnation. (Another leading indicator: The Actors Fund announced that the production surpassed $1 million in ticket sales on its premiere night.)

Let's acknowledge the affirmative circumstances of this virtual performance, which also offers up the talents of Wayne Brady, Ashley Park, Adam Lambert, Andrew Barth Feldman and André De Shields as Anton Ego, the restaurant critic whose effete heart Remy melts. It augurs the arrival, in the midst of a fraught time for theater and other performing arts, of a bona fide new musical. Even more remarkably - as its title suggests - it came together via TikTok, the digital platform on which users create videos of up to a minute.

Emily Jacobsen, a Disney-adoring teacher in Hartsdale, N.Y., prompted other contributors to add their imaginations to a "Ratatouille" musical on TikTok. A result was the 11 numbers for this production by nearly a dozen songwriters - including one, "Anyone Can Cook," by Broadway actor Kevin Chamberlin, who performs it himself, as the story's venerable chef, Auguste Gusteau. The material, massaged into a skeletal narrative by Michael Breslin and Patrick Foley, was handed over to a capable team including director Lucy Moss, orchestrator Macy Schmidt, music supervisor Daniel Mertzlufft and choreographer Ellenore Scott.

David Bengali's video design provides a coherent scaffolding for the story, which relates the arc of Remy's culinary coming-of-age, with the help of kitchen staff played by Feldman and Park. (The idea of multiplying the images of a pair of male and female dancers to make a full chorus is delightful, and the accompaniment of the 20-piece Broadway Sinfonietta - all female-identifying and mostly women of color - applies a welcome orchestral polish.)

This live-action version suffers a bit from the pandemic-imposed limitations on performers recorded in isolation. (The show remains online until Monday.) Still, one is inclined to adjust one's expectations, allowing both for the novel manner in which this project has come to fruition and an understanding that gaps in the storytelling have yet to be filled. An interlude definitely in need of elaboration: The moment that De Shields's Anton tastes Remy's ratatouille. The movie's depiction of the critic's ecstasy was a cartoon coup - and served as inspiration, in point of fact, for one of "Hamilton's" most spectacular numbers, "Satisfied." Here, in RJ Christian's song, "Ratatouille," Anton's epiphany feels insufficiently theatricalized.

Though the insider musical-theater jokes are fun - Priscilla Lopez, for instance, makes a cameo to send up her own performance in the original "A Chorus Line" - more attention must be paid to the basics of plot development. One would hope for deeper exploration of the magnetism between the buoyantly matched Feldman and Park, as Linguini and Colette. With Moss's guidance, they both leap wittily from animation to three dimensions. Brady provides a charismatic rat-father for Remy, and the more screen time accorded Mary Testa, as a cantankerous Gallic cook, the better.

Burgess is no stranger to anthropomorphic portrayal: he originated the role of Sebastian the crab in Disney's Broadway rendition of "The Little Mermaid." Here in gray turtleneck and trademark self-dramatizing ebullience, he's promoted from supporting crustacean to leading mammal. "I won't let a narrow-minded view determine what vermin can do," Burgess sings, in the musical's best number, Mertzlufft's "Remember My Name." It's a safe bet that as "Ratatouille: The TikTok Musical" makes its way in the world - digitally or otherwise - the producers will remember his.

Ratatouille: The TikTok Musical, by numerous songwriters, directed by Lucy Moss. About 51 minutes. Contribute-what-you-can tickets start at $5. Available on demand through Monday at 7 p.m. todaytix.com.