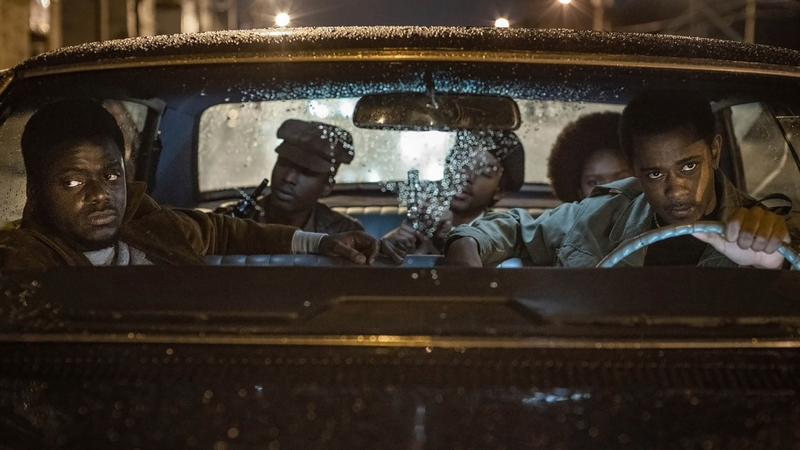 Daniel Kaluuya, Ashton Sanders, Algee Smith, Dominique Thorne and Lakeith Stanfield appear in "Judas and the Black Messiah," directed by Shaka King. The film is an official selection of the premieres section at the 2021 Sundance Film Festival. The event is making a pandemic-era pivot to streaming, holding a pared-down virtual edition. MUST CREDIT: Glen Wilson/Sundance Institute Photo by: Glen Wilson — Courtesy of Sundance Institute

The Sundance Film Festival, which Robert Redford founded in 1978 as a showcase for work by emerging independent filmmakers, has become a cinematic harbinger: Every January, thousands of filmmakers, distributors, publicists, journalists and garden-variety film fans trudge to Utah's Wasatch Mountains to sit in dark rooms for 10 days.

This year, no one will be packing snow boots and goosedown to brave Park City's notorious snowdrifts and sardine-packed shuttles. Instead, following the lead of many festivals last year, Sundance 2021 will make the pandemic-era pivot to streaming, holding a pared-down virtual edition. Because of a pushed-back awards season (the Academy Awards will take place April 25, two months later than usual), the result will be a first: a movie year that laps itself, with the latest Sundance premieres becoming eligible to compete for Oscars alongside movies that debuted at the festival in 2020.

Sundance 2021 will be a hybrid of virtual and in-person presentations. Although the core program will be online, festival director Tabitha Jackson introduced a "Satellite Screens" program, in which 30 art houses throughout the country will present specifically curated programs and coronavirus-safe screenings.

Plenty of festivals last year made the shift to online relatively seamlessly, including AFI Docs and the Toronto International Film Festival. What was missing was the ineffable charge that audiences feel when a movie is working: the all-important moment when a potential distributor reads the room and realizes they could have a hit on their hands.

But a more modest, hype-free Sundance might have its compensations. When I interviewed Redford in 2005, he was worried that Sundance had been taken over by "swag and too much celebrity."

Having become a proving ground for such directors as Steven Soderbergh, Quentin Tarantino and Catherine Hardwicke, Redford's indie-centric showcase had turned Park City into Paparazzi Central every winter, with everyone from Britney Spears to Paris Hilton showing up to jump-start their movie careers. (When Spears came in 2003, her quote instantly became festival folklore: "Sundance is weird. The movies are weird - you actually have to think about them when you watch them.")

Scores of promotional parties and pop-ups arrived, having nothing to do with the films being shown, but looking to leverage Sundance's sex appeal. "Suddenly you have all these gift bags," Redford noted ruefully. "And all I could think about was the cost of that going to the filmmakers. And it bothered me a lot."

In subsequent years, Sundance took pains to decouple from what Redford called "ambush marketers." But those forces will be banished entirely from this year's festival, which will take place Jan. 28 through Feb. 3. With the event stripped down (73 feature films, compared with last year's 118), shorter (one week as opposed to 10 days) and far less noisy, viewers will be able to focus on the movies. The latest offerings feature fewer recognizable names than in years past - more than half the films are directed by first-timers - but they hew to what Sundance has always been about at its purest: artistic audacity and audience discovery. (The festival is aiming to create noise in a new way, offering a plethora of free talks and special events on their online Festival Village.)

There are some stars at this year's festival: The actresses Robin Wright and Rebecca Hall will be making their directorial debuts, with "Land" and "Passing," respectively. Daniel Kaluuya and Lakeith Stanfield star in "Judas and the Black Messiah," about the FBI's surveillance of Black Panther party leader Fred Hampton. But for the most part, Sundance this year will be dominated by unknown quantities: No one knows what, if anything, will emerge with the all-important buzz that made Soderbergh's "Sex, Lies and Videotape" and Tarantino's "Reservoir Dogs" overnight sensations. And, absent the electricity of live screenings, it's not guaranteed that a hit will be immediately obvious when it happens.

That's just one of several things that will make covid-era Sundance a weird - but maybe not so bad - experience. During a normal stint at the festival, journalists covering the event have the dissonant experience of reporting about the Golden Globes and Oscar nominations from the year before while watching possible awards contenders for the year to come. In 2021, the year isn't even the "year," in any conventional sense: The Oscar eligibility window has been extended until Feb. 28 (the same day as the Globes).

That means films like "Judas and the Black Messiah," which will be released in theaters and on HBO Max on Feb. 12, will be up for last year's awards, possibly competing with such Sundance 2020 hits as "Minari," "Promising Young Woman" and "The 40-Year-Old Version." But the overlap doesn't bother publicist Cynthia Swartz. " 'Judas' wasn't really finished until the end of the year," she notes. "So this gives (the film) time to find an audience and create word of mouth before the nominations are announced. There's a longer runway."

Connie White, who programs films for the Middleburg Film Festival and 25 independent art houses throughout the country, is determined to make her virtual Sundance experience as similar as possible to the in-person version. She intends to travel from her home in Western Massachusetts to Boston, where she will watch in a hotel room close to one of her clients, the Coolidge Corner Theatre in nearby Brookline. She has already signed up for the links she wants to see, and has identified films she'll see on-demand, subject to capacity. (Like most virtual festivals, Sundance has put limits in place having to do with numbers of viewers and geographic availability, although all films in the program will be available in the United States.) "I'll be alone in my hotel room, but I'll be in the little Boston community," White says.

Like several other theaters throughout the country, the Coolidge will participate in the "Satellite Screens" program, offering locally focused talks and events to compliment the films on the Sundance platform. Which raises the question: If programmers like White are attending Sundance to scout films for regional festivals that occur later in the year, aren't they concerned that their audience will already have seen them?

"I'm not worried," White says. "We have yet to know which films at Sundance will be films we pursue for Middleburg, and our Middleburg audience doesn't know, either. They look to us."

For his part, Baltimore-based programmer Scott Braid, who attended Sundance while working for the Maryland Film Festival for 13 years, agrees that this year's pared-down program returns the festival to the roots that Redford had in mind so many decades ago.

"It's not so much driven around who's going to be there and what the big buzz movies will be," he observes, "and I hope that's something that we won't lose sight of once this is over."

As for tromping through snow and slush, standing in endless lines and making mad dashes to make the next screening, Braid is equally sanguine. "I do look forward to getting back to the public sphere when it's safe," he says. "But as someone who has gotten the flu more times than not from visiting Park City, I wouldn't be looking forward to that trip right now."