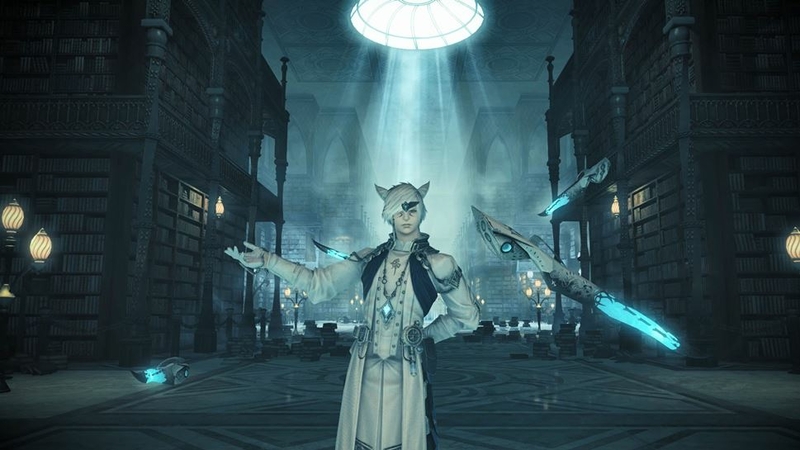 "Final Fantasy XIV," once considered a catastrophic failure, got a second shot three years later that turned fortunes around.

"Final Fantasy XIV: A Realm Reborn" is a success story of how an always-online multiplayer game can recalibrate after high-profile failure. Like a "Snyder Cut" for fantasy role-playing games, except with a proven track record of 20 million monthly players, and one of the longest shelf lives of any online video game.

Much of that success is attributed to Naoki Yoshida, or "Yoshi-P" as he's affectionately known. Yoshida took over the rehabilitation process as producer and director, armed with some knowledge of how to build massive multiplayer online RPGs after his stint as chief planner for "Dragon Quest X." "A Realm Reborn" released in 2013, and almost eight years later, it remains one of the healthiest online gaming communities in the world. For some, it's a game more beloved than "World of Warcraft." The game recently announced its latest upcoming expansion, "Endwalker."

In a video call interview with The Washington Post, Yoshida said "Final Fantasy XIV" may never end, as long as people keep returning. At its current audience growth rate, Yoshida said Square Enix see at least another five years for the online world.

"Even now, our CEO is encouraging us to strive for more players and for 30 million adventurers, and he still has future plans for us," Yoshida said through a translator. "Luckily, we don't see any stopping in our momentum. At one point we thought maybe we might plateau, but fortunately our player base just continues to expand and grow."

This means expansions beyond 2021 and "Endwalker." But, at least for the near future, it will mean new platforms. Despite the game's success, Yoshida says a lot of his team's time is spent on creating the expansions, and leaves little room for expanding to the Xbox or others, as much as they'd love to see the game beyond the PlayStation and PC ports.

"We provide content on a fairly regular basis, and our cycle is rather condensed," Yoshida said. "And it is a fairly stable cadence that we continue to follow. . . . We have to think about long-term planning with additional platforms, we need additional testing for that particular platform. So it kind of exponentially grows the amount of resources that needs to be allocated."

This stable cadence is a big factor of the game's ongoing success, and why its community has generally been pretty happy, unlike so many other "live service," always-online multiplayer games. Yoshida says that when planning expansions, about 70% of the work is already expected to be done, and the team leaves 30% of its energy to devote to different or innovative feature sets. This has been the approach to each story expansion, like "Heavensward" from 2015 through "Endwalker" this fall.

"For example, we'll look at an instance dungeon and it's within that circle of 60% to 70%," Yoshida said. "For creating our instance dungeon, we would need our game design to come up with the actual content of the plan and that would probably take about 10 business days, and then we would report that for proper approvals which cost another 30 days, and then we'll route that to the programmers, which would take them about two weeks to program in the mechanics. It's very clear as to how much cost and time we'll take with each component of the package that we have for our planners and the management."

This standardized approach has helped the team become more efficient in creating dungeons. But because the game is a live service, he's wary about the team resting too much on their laurels when it comes to creative stories and features. That's why the approach leaves about 30% of the team's time to focus on innovation. It's great that his teams can anticipate the work, but it's less exciting if the player base is able to predict the upcoming updates.

"There is a major risk of boredom and fatigue," Yoshida said. "To mitigate that aspect, that's why we leave 30% to 40% outside of the bundled package so we can take on new challenges, think of new pieces of content we can deliver. And sometimes we'll make use of that space over multiple patches to bring something larger scale. So by doing so, we still have a sort of stability in our 60% or 70% regular content."

It's especially difficult to create these games, he said, when a studio is backed by multiple investors, all expecting a steady revenue source.

"It's really crucial to understand how monetization is going to interweave with the actual gameplay," Yoshida said. "Looking at some recent examples, it does seem like the studios kind of throw on monetization elements and scramble to do so when the game is out there. It seems to be quite a challenge for those who come from console games."

Yoshida was famous for coming into the "Realm Reborn" project, completely unknown to the team that had worked on it, but armed with timetables and project goals to follow. He stressed that realistic goals and strict schedules must be outlined far in advance.

"Ideally we want at least two years worth of plans already made when you're starting out, what kind of content we want to incorporate and where we want to take the game," he said. "Structure your system so that it will accommodate for those updates and have your base foundation designed on those plans in mind, and having those updates considered as part of the plan."

Having a set amount of work enabled his team to create tools to make the work even easier. The ideal situation is that you're not worrying about any of this stuff around launch period, which leads to chaos.

"Final Fantasy XIV" has also been lauded as one of the better written entries in the series, a notable accolade for being one of only two of the franchise's massive online games. Yoshida confirms that he and four story writers conceive the premise first, usually locking themselves in a rental meeting room somewhere in the Shinjuku ward of Tokyo. The stories are usually planned out far in advance. For "Endwalker," the story was written by October 2019.

For the "Stormblood" expansion in 2017, Yoshida said he directed the team to write a story around the character Omega, a recurring superboss. Once they sketch up the rough concept of a plot, the writers would send the ideas to the battle team to start planning game mechanics around the planned fights and dungeons. Yoshida said he wasn't as satisfied with how combat scenarios and stories didn't jell until the team got more experience through "Stormblood."

"It's the same team that worked on the two other contents, but you could see there's such an improvement in what they were able to bring to the table," Yoshida said."

Even though "Final Fantasy XIV" may not be ending soon, Yoshida has now begun to shift his attention as producer for "Final Fantasy XVI," the next single-player chapter in the series. It's a reward for steering the online ship so well, and this will be his first stint in directing a mainline, single-player adventure.

Asked whether he could indicate any kind of hint as to what that game might entail outside of the trailer that debuted in December's The Game Awards, Yoshida chuckled and said he will not be saying anything. But he did elaborate on why he's keeping his mouth shut until he and his team have more to show.

"We don't want to say something that's half-baked and cause speculation on the title," Yoshida said. "With any Final Fantasy fan, depending on which Final Fantasy title is your jam, the point that you get excited will tend to differ."

He's not wrong. For many, the cyberpunk anime aesthetic of "Final Fantasy VII" for the first PlayStation was their introduction, while older gamers will fondly remember the more magical elements of the older Nintendo titles. Or, maybe they prefer the young adult dramas of the later series. It's important to note that "Final Fantasy" isn't an ongoing universe, but a series of disconnected, self-contained stories featuring completely different worlds and characters.

From what can be gleamed of the recent trailer, Yoshida's "XVI" will at least be a bloodier and more medieval affair than we've seen from the series in decades.

"Each person will probably have their own sort of idea or image of what the next Final Fantasy should be," Yoshida said. "Saying something half baked is definitely very high risk. If something gets spoken about, someone will pick it up on social and it starts to spread around and people will form expectations. So with 'Final Fantasy XVI,' whenever we do reveal more information on it, we hope to show what kind of game it's going to bring, and what kind of excitement we can bring."