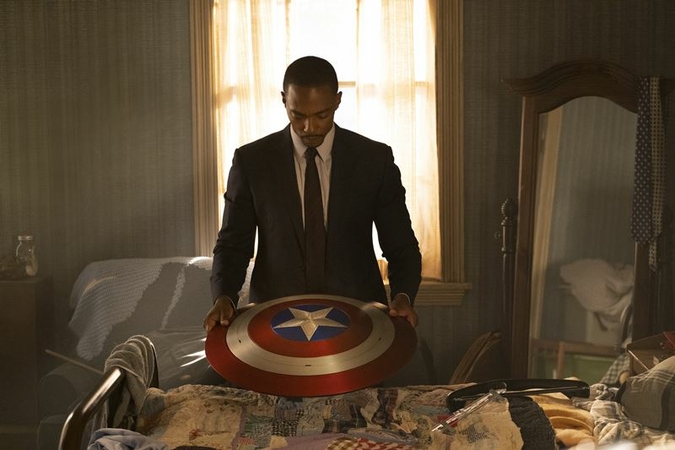 Sam Wilson (Anthony Mackie) looks down at the shield he inherited from Captain America in "The Falcon and the Winter Soldier." MUST CREDIT: Marvel Studios/Disney Plus.

During the final moments of the 2019 blockbuster "Avengers: Endgame," the possibility of a Black Captain America became a likely Hollywood reality.

An elderly, time-traveling Captain America (Chris Evans) hands over the adamantium shield to the loyal partner who was always on his left, the highflying Falcon (Anthony Mackie). It signified that a torch was being passed - and that Marvel Studios' next decade could be a more inclusive one.

The time to see what will grow from that planted super-seed is now. "The Falcon and the Winter Soldier," the next Marvel Studios event for Disney Plus, debuted the first of six episodes on Friday. The show will follow two Captain America sidekicks, the Falcon/Sam Wilson (Mackie) and Bucky/the Winter Soldier (Sebastian Stan) as they become reluctant partners tasked with carrying the weight of the star-spangled Avenger's legacy. America needs someone to wield the shield once more. Does Uncle Sam think another Sam is the right man for the job? Or will there be resistance to a Black Captain America - and what, exactly, will that imply about the country he has sought to protect? 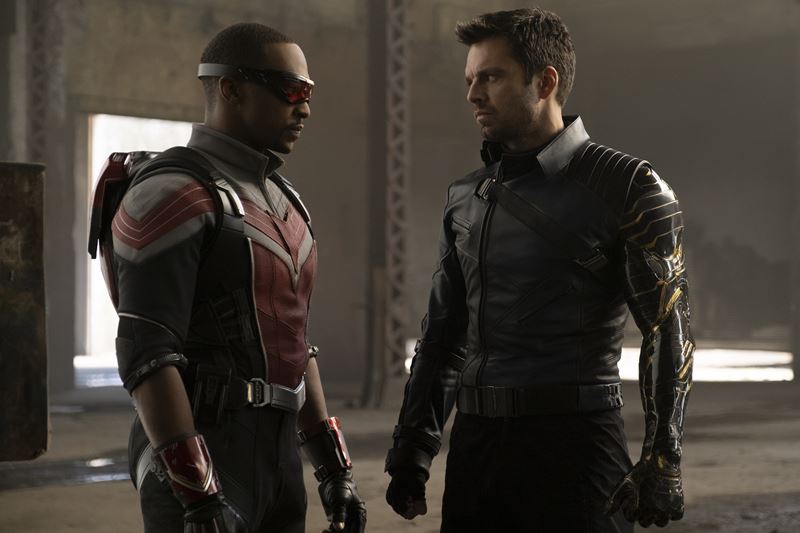 Series head writer Malcolm Spellman gives credit to the billion-dollar box office success of 2018's "Black Panther," which gave him the chance to write the journey of the Falcon, another of Marvel Comics most recognizable Black superheroes. "Black Panther's" story of a secret, wealthy, powerful and technologically-advanced African nation going up against a fallen son who was left on his own as a Black man in the American diaspora proved Marvel Studios could approach the subject of race and not lose a global audience.

"Black Panther shattered old superhero movies," Spellman said. "Part of why it did that isn't just by what you saw, it's how positively the fans reacted. It proved that you could be relevant and tackle real stuff without alienating people. 'Black Panther' paved that runway for us to bring the America-ness and the obvious struggles that's going to come from a Black man in America going through this [superhero] thing."

Spellman would not specify if Sam Wilson does indeed become Captain America in this series. This is Marvel Studios, after all. No spoilers. The fun is always in the secrets that are discovered along the way.

But there are volumes of Marvel Comics that could serve as inspiration for such a moment.

In 2015, the company introduced Sam Wilson as the new Captain America in a storyline by Nick Spencer and Daniel Acuña. The plot centered around the United States being divided over the optics of a Black man being the American superhero. In 2003, the Robert Morales and Kyle Baker miniseries "Truth: Red, White and Black" revealed that the Super Soldier Serum that created Captain America during World War II was perfected by experimenting on Black soldiers, and that the first Captain America was actually a Black man named Isaiah Bradley.

Spellman - who was hired based on a recommendation from "Black Panther" executive producer Nate Moore - did say that this series isn't scared to tackle matters of race and that the writing staff is predominantly Black.

"You cannot, in 2021, show up and be Black and be scared to be Black or wield Blackness in your creativity," Spellman said. "I did not come here to hide from that issue. We didn't want to burden the show and show up with an agenda, but we wanted to be real, even within the Marvel universe. What would be real within there? I believe this show honestly approaches that."

The series debuts on the heels of a huge Marvel Studios/Disney Plus hit, the genre-bending, android-and-witch wackiness of "WandaVision." But while that show was designed to have a network television feel to assist with its trickery, director Kari Skogland said "The Falcon and the Winter Soldier" is closer to what fans are used to seeing on the big screen.

"From day one, we approached it like it was a movie," Skogland said. "It really plays like a movie. Yes, it's carved up, I suppose, in terms of a one hour-ish rhythm, but in actual fact, when they are all rolled out and you saw them back to back, it will play like a Marvel movie."

Skogland doesn't mind having the show that comes directly after the hype of "WandaVision." "It really opened the door for us to walk through," Skogland said. "It really set the table for us to hopefully hit the ball out of the park alongside them. But we'll see. Hopefully the fans will embrace us similarly." 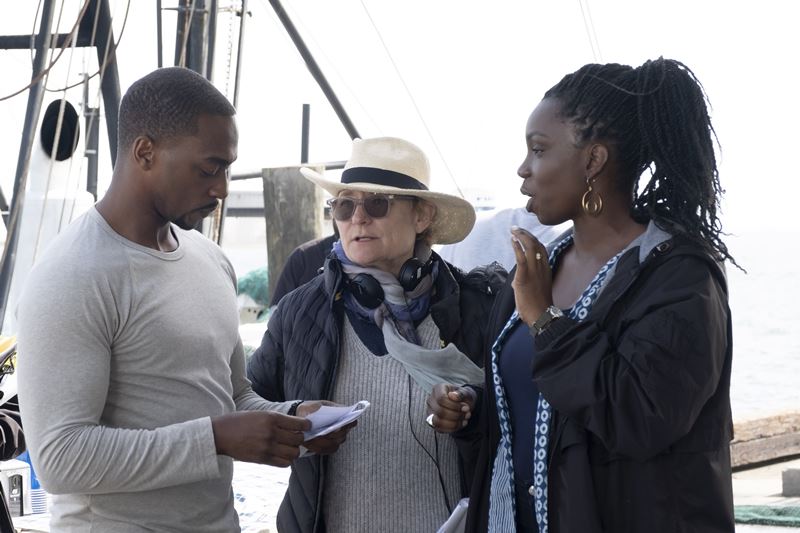 Spellman said Marvel Studios president Kevin Feige wanted every episode of "The Falcon and the Winter Soldier" to feel like a movie, and the company's expertise helped make that easy to execute.

"We worked with the people who make Marvel movies and they do nothing else," Spellman said. "The magic and power and world-building and spectacle that they know how to do is singular."

The "Falcon and the Winter Soldier" collaborators realize that, as with "WandaVision," plot rumors might run wild online. But "WandaVision" debunked almost every rumor in its final episode. So viewers shouldn't get too hung up on the speculation about who inherits the stars, stripes and shield.

"I think the fans are making a lot of assumptions about how this series starts," Spellman said. "It's not an obvious journey on what happens with that shield. That symbol is going to force a lot of stuff to the surface for each of the characters."

Skogland said to expect a show with a buddy-cop vibe and plenty of Easter eggs for hardcore fans but not to expect the comic book origins to completely drive the narrative. There will be surprises.

"We're having a conversation that is a little less conspiracy and a little bit more immediate," Skogland said. "Whatever you think you know, you probably think wrong."

Tags:
The Falcon and the Winter Soldier TV